To protect against blunt strikes, high velocity projectiles, and concussive energy weapons, what type of helmet design would best distribute force of impact and/or redirect blows away from the head?

A common futuristic helmet is a sphere, or ovoid helmet. The reason is that a sphere is the strongest shape to resist pressure and impacts - there's a reason most helmets are half-circles, and it's actually for the same reason our heads are close to spherical. That's just the best shape to protect your brain, and helmets - even high tech ones - operate on similar principles.

One problem with spheres though is that they absolutely suck at hiding you, because no matter how you're oriented one part of the sphere will reflect perfectly back at any radar transmitter. Instead, consider the shape of the stealth fighter: 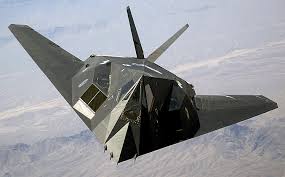 The hard angles negate almost all radar reflections, because incoming radiation will be absorbed or reflected away from the transmitter unless it happens to line up exactly with one of the flat surfaces.

In the future, I expect that stealth is going to be extremely important, even for foot soldiers. Being pinpointed will kill you, and you don't want to have a helmet that's easy to see on radar.

So I suggest a three-layered mix (or four, depending on how you count):

This provides a balance - you get excellent stealth until you get hit, but when you are hit you still have a good chance of surviving the strike.

A critical component would be a shock-activated mechanism which locks the helmet in place with respect to the torso. Letting the head move under impact lets the brain bounce around inside the skull. The resulting non-penetrating TBI (Traumatic Brain Injury) is a major consequence of IEDs and traffic accidents.

Since the helmet is futuristic, we can assume it has some ultra-hard alloy shell that is remarkably hard to break through. This removes the "sharp" injury issues such as bullet holes, knife wounds, and broken skulls.

However, there is one thing armor like that cannot stop: physics. When there is a collision, momentum must be conserved. We have to either deflect the oncomming assault, or soak up its momentum. For a bullet this is a minor concern (maybe a bigger concern for large bullets like a .50cal). However, for things like a baseball bat, they are major concerns. If the skull moves faster than the brain can catch up, its concussion city.

To solve this, the helmet is going to have active and reactive features. The outer skin should include a set of robot arm like devices. When a slow enough projectile (like a baseball bat) comes into view, these arms reach out from the helmet and try to deflect the blow. The effect would be like having a karate master guarding your head. In cases where the deflection cannot be perfect, it can cushion the blow like the foam in a bicycle helmet, except the restraining action of the arms would act like foam on the outside.

Of course, this wont protect against everything, so the helmet needs to come with a set of reactive features as well. One reactive feature would be what WhatRoughBeat suggested: a way to lock the skull to the torso, ensuring there aren't any neck injuries. We also need a very exotic reactive measure: explosives. This helmet does amazing things against slow projectiles, but fast projectiles are too hard to stop, so their momentum has to be dealt with. Likewise, explosive concussions could still cause a brain concussion if they threw the person back too quickly. When one of these situations occurs, the helmet needs to fire off squibs that are designed to act like small propulsive devises, rapidly undoing the momentum transfer of a bullet or a concussive blast by transferring the momentum to the air behind the person.

Taking a page from tanks and AFV's, the soldier might be protected from many sorts of threats by an active defense system, which fires some sort of counter round against the incoming threat.

Consider that Israel now offers a "Mini-Spike" Anti personnel guided missile. Soldiers will face a threat from incoming rounds which can be guided right to impact. A missile sized weapon could be countered by a grenade sized counter weapon that causes it to tumble out of control before impact (and ideally disrupts the warhead). If the soldier is "painted" by a laser pointer, the detector launches a smoke grenade which blocks the laser and interrupts the beam path, throwing off the sensor. A more advanced solution might be to include some sort of metallic element as well, to scatter millimetric wave radar.

Concussion and blast could theoretically be disrupted before reaching the soldier as well, either by throwing out a shock wave that intersects the incoming one, or using some mechanical means of disrupting or deflecting the shockwave. Boeing has applied for a patent on a system which uses highly focused microwaves to create the cancellation wave.

Active armour is obviously going to be more complex than passive armour (the soldier will need a backpack housing the sensors and launching tubes for the grenades, as a minimum), and the tactics will also change to keep soldiers from hitting each other with their protective shields.

Not the answer you're looking for? Browse other questions tagged science-based armors .

31
How do I encourage fully armored knights to carry a shield
18
Advantages of armour when fighting zombies
8
How would medieval combat differ if its arms and armour were refashioned today?
31
How do I create armor for a physically weak species?
14
Could the development of a body armour that completely stops any small arms fire make a civilization go back to medieval-style combat?
13
Early warning detection system for ground troops, against orbital strikes
2
New Age Armor Materials
1
What modern materials would be useful for a steel plate armor?
3
Composite armor plates: stainless steel mesh embedded in poly resin