The information presented in the previous episode is out of date.

In an alternate universe, there is still an Earth in geochemistry only. This one, Alternate Earth 600, is a "backwards Earth". Instead of 24 hours, a day lasts 42 hours. Instead of 12 months, a year lasts 21 months (translated into roughly three Terran years.) Instead of orbiting one sun, it orbits two (a G-type binary). Instead of rising from east to west, the two suns rise from west to east. Which means that instead of 22.1 to 24.5 degrees, its axial tilt alternates from 112.1 to 114.5 degrees. It bears some resemblance to Chris Wayans's "Serrana": 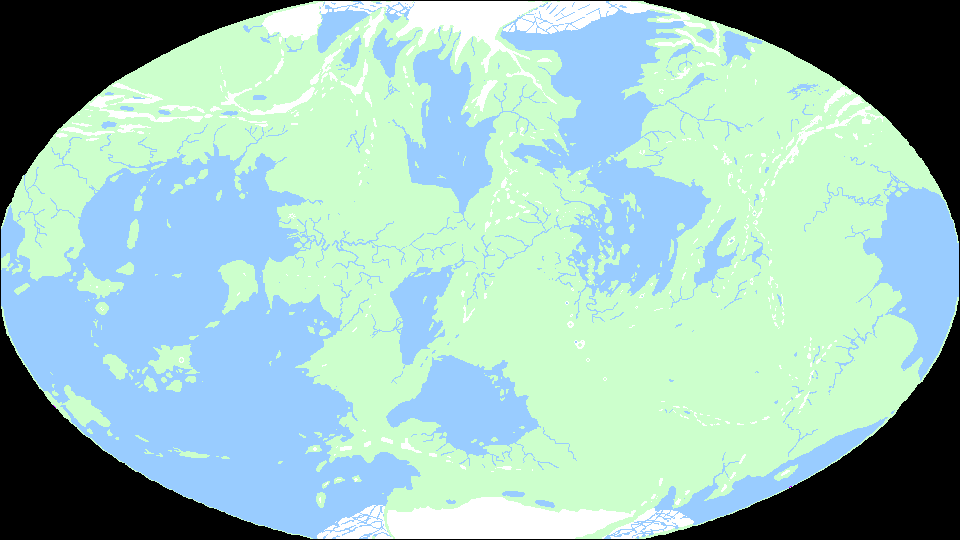 The deepest ocean trench is 3.2 miles. The tallest peak, on the other hand, is 5.7 miles above sea level. What look in the picture like tiny little rivers are actually flooded faults (similar to Malawi, Tanganyika and Victoria) that are processing to break up this supercontinent.

Today, this alternate Earth has no multicellular lifeforms--all you'll ever find there are marine microbes. The atmosphere is identical to the Cambrian of back home--levels of carbon dioxide are 4500 parts per million, yet oxygen still makes up 12.5% of the atmosphere.

To that end, one of our scientists, who was uninterested in single-celled germs, decided to terraform that planet, which is against the law according to the scientific community. Unlike Serina, in which the list of seeds is short, vague and seemingly random, his seedlist is a long one, consisting of most (not all) of the algae, plants, fungi and animals that we humans have used for human purposes--food, pets, show, research, pest control, pollination, to name a few. (If you want the whole list, let me know in the comments below.)

However, would any of the seeds, who evolved to work on a planet of 24-hour days and 365-day years, survive the initial try in their new home with astronomical differences, or would there be an instant mass extinction?

For plants that evolved on a 24 hour light cycle planet, some do surprisingly well at other cycle lengths. Cycles of up to 38 hours are used in indoor hydroponic setups. You can take the work of indoor hydroponic enthusiasts and use it as a starting point.

Your planet will support plant life. Not all plants, and not everywhere, and crop yields will be all over the place. But they'll grow. Life is surprisingly resilient and adaptable.

Not the answer you're looking for? Browse other questions tagged science-based survival terraforming alternate-earth adaptability or ask your own question.

4
Is a 100% effective mass extinction possible without destroying the planet?
4
How would a 384 hour day/night cycle on a desert planet affect the weather?
4
If Earth Were a Gas Giant's Moon
6
Will the Dinosaur Empire Still Stand Strong If Chicxulub Hit Earth at the End of the Jurassic?
8
The Great Oxidation Event…Artificially Imposed on a Tharn-Like Alternate Earth
6
In an Ice Age Extinction, Which Latitude Would Be Hit Harder--Tropical or Temperate?
2
Could an Ice Age Extinction Wipe Out All Marsupials?
5
How to Terraform a Dead Earth
2
The 42-Hour Day: Episode I: Ocean Currents