Character can rotate a ring or circle off of any point, how deadly is this power?

I made a character that can rotate rings or circles off any point they can see, and now I'm wondering how deadly this is, and if it's practical in gunfights and such. Here's the details on it-

The diameter of the rings/circles is up to a hundred feet. If it is a ring(center is not rotating), the ring could be anywhere between a few inches and 50 feet wide. the rings/circles can be rotated at any speed up to mach 1(might change if it's too powerful). Rings/circles affect all matter up to ten feet above the plane of movement(but can be lower if Bob wants). People in the ring feel no acceleration or movement, but looking out of the rotating area is really trippy and confusing. Any matter that is suddenly hovering in the air does not fall until the ring/circle is dispelled. Bob has tuned his powers so he has lots of control. If standing below you, he can rotate your legs to the side and cut you in half. Bob is subject to the rings/circles like anyone else. All matter in the ring/circle rotates. Any matter entering the ring/circle begins to rotate with it until the ring stops(putting your hand in the ring will get your hand chopped off). Entering and exiting the ring/circle while it is spinning is very risky and most of the time causes injury or death. The plane of movement can be at any angle, and people affected feel gravity become the plane of movement(Bob can walk up walls if done right). Bob can only do one ring/circle at a time, and the concentration required keeps him from doing much else. There is no reload time needed between creating rings. Bob is human. The rotation point for the ring/circle can be anywhere Bob can see and within a half mile. Bob can move rings without needing to wave his hands around, but it helps.

If I have forgotten anything or add some for any reason, they'll be put below.

How deadly is this power? Would Bob stand a chance against a dozen bad guys with guns? Should Bob be locked away forever?

He will literally bury them alive. 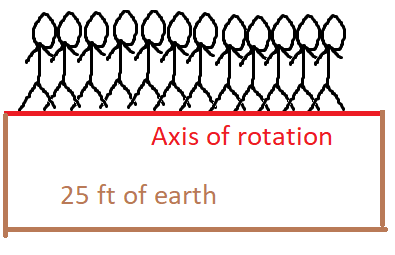 The 12 guys wont get a shot off before they are completely inverted. Then they fall onto their heads, and are then buried by 25ft of earth. 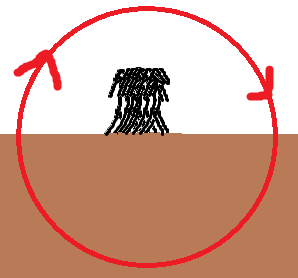 He could send the bullets back, but with constraints, we can find how fast a projectile has to be traveling in order to not be sent right back. If we go with a 50-ft ring rotating at Mach 1, that means that it takes 141 ms to rotate 360 degrees, so it'll take 70.3 ms to rotate 180 degrees. A bullet will have to be traveling at least 217 m/s to not be sent back at the shooter, if it were to travel the whole distance. If you were going with a bullet that goes straight across, and has a trajectory shift of no more than a single degree, the minimum speed will have to be 39.0 km/s, which is far faster than any bullet that our current technological level can afford.

After all, it depends on what type of gun they're using. He could still rotate the ground to erect a wall that will absorb the bullets, and make his escape, or bury them alive, or cut them in half all at once. Another factor is where exactly Bob's opponents are. If they surround him on all sides, he will be forced to make a risky move that if done wrong will either crush him under the earth, result in him getting shot up, or bisect him. But if they're all grouped together, they'll be easy to deal with all at once. And to take him out, just stab out his eyes and lock him in a regular prison. Or, have snipers with an attack range more than 801 m (.5 mi).

9
What is a good way to explain how a character can produce flames from their body?
3
How fast would a person need to be to cross a gap and prevent a gunman from shooting someone?
8
A character has super-speed but has to deal with normal resulting consequences: how fast can she run safely?
2
Speed of repeat teleportation
5
How can a nation today become a super power without any nuclear programme?
3
Science of Green Lantern and solid light constructs
2
How can my character transform without losing their powers?