Are purely electromagnetic propulsion systems feasible at all?

It seems that one of the main hurdles of creating an interstellar propulsion system is the need to carry reaction mass to accelerate while conserving momentum. Pretty much every "fringe science" propulsion proposal tries eliminate this problem (e.g. EmDrive, MEGA drive, Alcubierre drive, almost as if bypassing conservation of momentum is a primary need).

But we know electromagnetic waves can be used as reaction mass to satisfy conservation of momentum (that is how light sail works), so we don't really need to carry reaction mass.

Excluding "passive systems", like a light sail accelerated from an Earth based laser, have photon propulsion ever been seriously considered for starship drives?

Considering the time it takes and the amount of fuel required, is there any way an ordinary nuclear fission reactor placed in the focus of a parabolic dish at the back of a starship power it to the nearest star using heat radiation as propellant?

Sure. Over a sufficiently long time, you don't need a whole lot of thrust to get up to very high speeds.

If not this, is there any workable design?

If you are using a fission reactor anyway, you might consider a Fission fragment rocket, which gives you a better power-to-thrust ratio than a pure photon rocket does.

The trouble with all those fringe sciences is that eventually one of them sticks, and becomes real. If we end up building interstellar travel, its a safe bet that 2020 physics says the engine we used was impossible, just as 1850 physics said time dilation of fast moving objects was impossible.

That said, I reckon there is one that's feasible within near future science: A Brussard ramjet.

If you can capture the interstellar medium, and accelerate it away from you using a particle accelerator, that thrust is enough to make a difference. The intersteller medium is 70% hydrogen gas, and about 10^6 molecules per cm^3. That's 10^-21kg per cm^3, or 10^-15 per m^3. A 10sqm sucker mounted on the front of a ship can collect a few micrograms every km of travel.

Combine that infinite source of free particles with tech like this single chip can accelerate a particle to 0.94c, and you've got a few N of free acceleration for every km of forward movement.

Yeah it's no star wars battle with sharp dogfights, but that could get a generation ship to a nearby star system.

The Atomic Rockets page on photon drives conveys that at perfect efficiency in converting reactor power to a collated gamma ray beam (not happening; there will be waste heat, dispersion...), it takes three hundred megawatts of power to produce one newton of thrust. Unless you'd like to have your building-sized spacecraft accelerate with less than a millionth of a gee, fission reactors are out the window, as are most modern conceptions of fusion reactors. The only really efficient way to convert mass to energy on the scale needed for this kind of drive is a matter-antimatter reaction; proposed photon drive rockets use big tanks of antimatter as their fuel. Since there is no currently feasible way to produce large amounts of antimatter, photon rockets have not been seriously considered by space agencies. 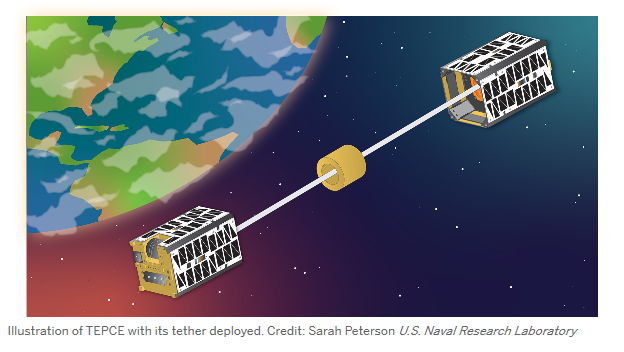 Electrodynamic propulsion relies on a long charged electrodynamic tether. The tether is charged by the spacecraft and by interacting with magnetic fields in space, it can generate propulsion. It still costs energy, but there is no reaction mass and nothing to be hurled behind the spacecraft - just the interaction of charged fields. There are spacecraft now which operate using this principle.

“In other words, it is the sailing ship of space,” says Enrico Lorenzini, a professor of energy management engineering at the University of Padova in Italy, who is not involved in the TEPCE mission. But instead of wind, the electrodynamic tether technology moves thanks to the physical laws that govern electric and magnetic fields. A tether in Earth’s ionosphere—an upper atmospheric layer filled with charged particles such as free electrons and positive ions—can collect electrons at one end and emit them at the other, generating an electric current through itself. The electrified tether’s interactions with Earth’s magnetic field produce an impetus known as the Lorentz force, which pushes on the tether in a perpendicular direction. 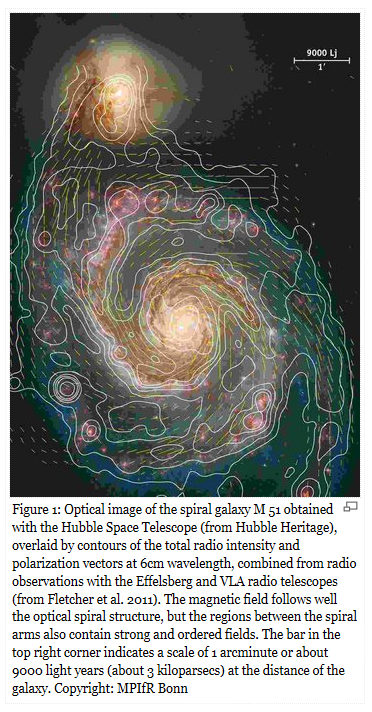 The ISM contains equal numbers of positively and negatively charged particles, so that large-scale electric currents (that could induce large-scale magnetic fields) cannot be maintained. The most promising mechanism for field amplification is the dynamo that transfers mechanical energy into magnetic energy... With a suitable configuration of the gas flow, a strong magnetic field with a stationary or oscillating configuration can be generated from a weak seed field. Seed fields could have been generated in the early Universe, e.g. at cosmological phase transitions, or in shocks in protogalactic halos (Biermann battery), or through fluctuations in the protogalactic plasma.

To traverse interstellar space using electrodynamic propulsion, one would need to identify favorable force lines and align the ship with their path. This lends itself to a fiction because as professor Lorenzini noted in the above quote, it becomes analogous to a ship in the days of sail. And for pushing off against the energy of weak fields one needs a larger sail, or tether. I envision a huge skein of copper wires billowing around the spacecraft, glowing a slight green with its own charge and faint copper ion plasma. And you will need to be ready to take it down if a storm comes...

I don't know if photon propulsion has been considered, but it's likely not because of the low energy. Photons officially have no mass. If I can quote wikipedia: The total force exerted on an 800 by 800 meter solar sail, for example, is about 5 newtons (1.1 lbf) at Earth's distance from the Sun.

Now interstellar travel doesn't require a lot of energy. Simply putting in more energy is enough, as there is (practically) nothing to slow the craft down. So some engines have been proposed that accelerate very, very slowly, but they can move for decades, if not possibly centuries on end. But light on Earth distance on an 800 by 800 large sheet isn't a small amount of energy. The reason to use light is that it is already abundant, or can be used in beam sailing as you say. With the propelling laser based outside the craft. Putting it on the craft has several very bad implications. You'll have to push against the reactor as well, and in general firing something pushes you backwards with the same amount of force. I don't know if the same applies to light, but you might just put as much force backwards as forwards if you apply it to a sail. Then you might better just aim it backwards and fire away for acceleration.

There are some further alternatives, like they are trying to use curves of spacetime to their advantage, generating a deeper field in front of the craft than at the back, pulling it forwards.

But if you really want to have an EM drive, check out what NASA is doing at this time with it. Already in 2015 they were doing experiments to check if it could really work, as physics said it couldn't. Still it does work a tiny, tiny amount. Seems negligible, but is according to them pretty impressive. More research is obviously needed to make very, very sure it isn't an error, but it might well be possible to use it later.

The title of the question looked promising, but the body then went somewhat off on a tangent.

In the elaboration on the question, it is still assuming that 'reaction mass' is the only way to propel something.

Yes, the laws of conservation of momentum require energy to be input into a system to create acceleration, but they do not require that reaction mass is necessary, nor that the energy source be inherent or contained in the object that you require to be moved.

There are hundreds of examples of transportation/propuldion systems on earth that do not use 'reaction mass'. That is, they have exactly the same mass at the end of the journey as they do at the beginning, without refilling. They mostly use electricity and electrical motors (those that do not depend on gravity to pull them down to earth). A trolly car, for instance, can go a great distance without its mass being changed one iota. Okay, so it is constantly supplied with energy, but electricity is hardly a 'reaction mass', the electrons are returned to source. Tesla's hyperlopp system, where the propulsion system consists of electromagnets in the tube wall propelling the cars, is another example. No reaction mass need be carried at all by the train. Maglev systems are currently in operation using induction motors that require no energy be supplied to the trains. We even have tractor beams under develpoment as serious no-reaction-mass-required transportation systems.

There are also many propulsion systems currently used in space travel that do not use reaction mass. They use the gravitational boost of planets, in a sling-shot maneuver, to boost speed.

As a future-feasible practical example, using electromagnets (as the title suggests), think of a regular, commercial flight path between say Earth and Mars. Along the path, place super-huge satelite way stations powered by fusion ractors or such. They exert a powerful electromagnetic field (or other such tractor beam) along the route, such that they alternately attract and then repel the spaceship along the route. Newton, of course, woukd insist that their mass would have to be substabtially greater than the 'cars' they pull/push, and substantial development would be required in being able to focus/direct/concentrate the electromagnetic field, but this is an engineering problem more than it is a physics problem. Like Ash said in his (her?) answer, it is only a matter of time before the physics and enginnering textbook get thick enough to allow this scenario, first on an within-star, then an inerstellar system.

But the bottom line is, the laws of the conservation of momentum do not demand reaction mass be used for propulsion, just some form of supplied energy.

Not the answer you're looking for? Browse other questions tagged science-based hard-science space-travel spaceships .

10
Would the Hawking radiation from a small black hole make a feasible propulsion source?
2
Gravitational waves as "reaction mass"?
35
Which fast STL drive could not be weaponized or results in perpetual motion?
6
Basics of designing a lightsail?
10
Are the properties of "element zero" feasible?
5
How would two generational ships traveling at point eight cee communicate with each other?
8
Propulsion Systems
15
Decelerating a relativistic, beam-powered starship at its destination without pre-established power-beaming infrastructure at said destination