Is my binary planet realistic?

I had this idea for a terrestrial planet-ice giant binary system. Both planets had their origin inside the outer solar system but were moved into the habitable zone by a passers-by black hole.

The terrestrial planet, an object around the mass of Earth but with a larger radius(around 1.2 times Earth's radius), became a water world, and began to host bacterial life. However this fledgling world immediately faced a crisis caused by its larger neighbor.

The ice giant companion is around 9 earth masses and around 3.2 Earth radii, ad its composition is similar to Neptune. However, since it migrated into the habitable zone, it is no longer able to maintain its hydrogen gas. The gas escapes in sudden bursts, some expelling as much mass as Pluto from the giant. These hydrogen bursts slam into the giants companion, and are sterilizing its atmosphere.

Now, my question is, is this setup plausible? Could a terrestrial-ice giant duo even form, would these sudden hydrogen bursts be the result, and is it even possible for the water world to develop life?

The backstory (exactly as written) is extremely unlikely. I'm not going to say impossible, but it would be a hell of a trick shot to line up. (Two sniper bullets hitting head-one kind of trick shot.)

However there is one tiny change I can make to your backstory to make it not only plausible, but more earthlike:

At some point in their history. The planets collided

It may of been billions of years ago. But if the two planets collided and transferred momentum into each, they can very easily synchronise into a binary system.

The earth and moon are actually a "binary system" (very loose meanings of the words). They orbit a center of mass (barycenter) just inside the Earth, but offset from its center. 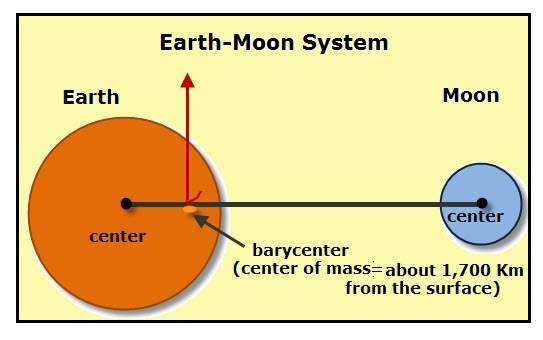 Forming the "binary system" from an impact is the https://en.wikipedia.org/wiki/Giant-impact_hypothesis, which explains that the earth and moon are the result of an impact. Your two planets could have collided and formed a similar system to the Earth and Moon, with your ice giant and water world.

I can't see how it will come out in bursts - but assuming it does, hydrogen wouldn't sink to the surface - its lighter than air in the earth-like atmosphere.

The hydrogen would form an upper layer to the atmosphere. I can't see any negative effects to the life on the surface from this. Unless the hydrogen displaces all oxygen, this should be a non event.

The chain of events is hard to explain from a scientific perspective:

Not the answer you're looking for? Browse other questions tagged science-based planets habitability gas-giants or ask your own question.

20
Is a Jupiter-sized planet plausible in a habitable zone?
22
Can a gas giant have its own habitable zone?
38
Habitable moon of a gas giant: working out the sizes and distances
3
Maximum amount of habitable moons possible around this Jovian planet?
22
Reality Check: Habitable moon around earth-like planet
2
Conditions for human life in a Jupiter-like system
18
Can a habitable moon rely on the magnetosphere of its parent planet for radiation protection?
3
Feasible star + planet + moon combo? Did I miss anything that makes this system wildly unstable or otherwise impossible?
8
Orange Suns and Blue Jupiters