I am aware of these previous questions

How quickly could a "shapeshifter" lose mass, realistically?

Is there a credible way a shapeshifter could gain/lose body mass when changing forms? -

However I want to preserve mass, so my question is different.

Shapeshifters may have to simulate a variety of people/animals/objects in order to fool humans. I want them to be able to change back and forth rapidly.

I can account for a change in size in varying ways, but here I will focus on asking about the following method. Large objects that are solid in real life can be made to appear solid from the outside by a shifter making themselves hollow on the inside.

A shifter that has the mass of a Border Collie dog, needs to simulate a large horse. There is conservation of mass and they have to change quickly. Suppose that the "horse" is hollow. 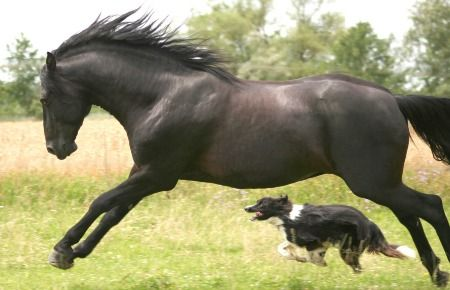 A balloon-like horse will tend to act more like a balloon than a horse. A shape-shifter horse will have a great deal of trouble galloping. It may leap too high, not get enough traction, or just get blown away in a stiff breeze.

Is there any way to solve this while preserving the mass of the shifter?

I would think the fastest way for an animal to change mass and use that mass to effect would be to slurp up water. Hero of Alexandria, thousands of years ago, was already demonstrating how air and water pressure changes could create motion. Internal muscle arrangements combined with variable bladders would allow rapid shifts in shape, while drinking or "Peeing" excess fluid (separate fluid, not enriched body fluids) would allow any shape shifter who has access to water to rapidly alter shape and mass.

Hydraulic motion is certainly possible, and more radical designs than those in tuna and jellyfish have been suggested in speculative evolution. Hydrostatic Skeletons can and do exist biologically, allowing a semi-rigid structure (especially if there was a way to rapidly and selectively gel and un-gel the fluid to increase the rigidity).

Combined with air pressure to create rapidly changing shapes of some body parts, hydraulics would give your organism the ability to weigh whatever they wanted, and shift weight around to more accurately simulate shapes and motions. I imagine each new form would require considerable practice and tweaking to get right. Further, your organism would have an appropriate weakness (needing access to water), but super organisms are really not much fun in stories.

I don't know HOW alien your shape changer's biology is, but if they have a wide range of internal temperatures, they can freeze ice and vaporize water to steam, and at that point the sky is the limit. I don't think that one even needs explanation.

Since shapeshifters are able to assume a new shape at will, they can shape parts of their body in a way that they connect to each other (think of the connections and fittings of lego parts, electrical plugs and sockets, or private parts). One single border collie does not have the same mass as a horse, but fifty border collies will.

You may think that coordinating the movements of 50 shapeshifters for galloping may be hard, but they might also connect their nervous systems when they all form a single creature. Or they might have rehearsed a lot, thus it becomes second nature to them.

Hold Still and Hide Flesh while Pretending to Be Small

Say you look like a horse. You need to look like a dog for a while, and your onlookers don’t have direct eyes on yet.

Shove most of your mass in a psuedopod under a bush, or into the ground, or some other place they won’t look.

Then wait and have the pleasant encounter but don’t move significantly, so that they don’t notice that the dog is tethered to the bush.

All things fall at 9.8m/s^2 and it takes a very significant increase in surface area for a shape shifter to be so affected by air resistance that you would get a slow fall effect. This is because your horse never "falls" more than a few inches per step. Since air resistance compounds exponentially with speed, your vertical air resistance would be next to nil.

Where you would see the most air resistance would be against the Coronal plane of the horse at full gallop.

Since I can't find drag coefficients on dogs and horses, we'll have to look at humans instead. A human has an average c of 1.0-1.3. Horses have a slightly sleeker body design than a human; so, I will assume the low end of that at 1.0 and border collies have a lot of shaggy fur which creates more drag so I will assume they are at the high end at 1.3. Balloons are about a 0.5.

To find A I took a histogram of the front profile of an average sized horse, border collie, and balloon where each pixel is at the scale of 1/2". 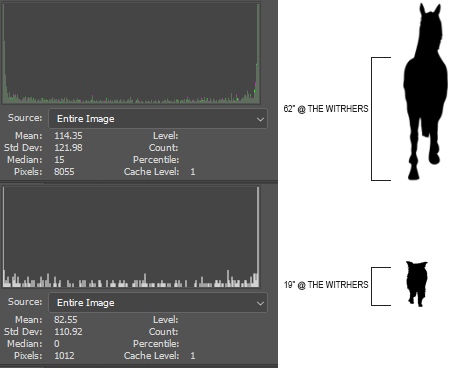 v is just the top speed which for a horse is 12.5m/s and for the border collie 13.4m/s. For the ballon I will use the horses speed to simulate the air resistance at our target speed.

I will also use a mass of 17kg for the horse and dog, and 2g for the ballon filled with air.

So the force of friction from airdrag is:

This is not a significant enough reduction to cause a noticeable change, again, because the up and down motion of the horse is not very significant, one would no notice such a small change in downward acceleration unless they were extra-ordinarily observant and deeply familiar with horses.

As it turns out, density does not significantly affect how well an animal can move to nearly the degree we think it would. You can see that the horse experiences much more air resistance than the dog, but it's still so little that it would take 304m to come to a complete stop from air resistance alone. This is not at all like a balloon that would come to a stop in just under a meter at the same speeds. Since the horse makes ground contact about once per meter while at full gallop, this means it's total slowdown from air resistance between steps is still going to be too small to be perceivable, even if it is technically more than a dog or horse would normally experience.

As for comments about traction, the total difference in downward force between a dog and a horse sized dog from buoyancy is only 3-8%. However, the increased surface area of the hooves compared to the dog's paws is over 1000%. So, the horse sized dog would actually have WAY better traction as a horse than it did as a dog thanks to having so much more gripping surface to work with. This means the horse would not slip and slide at all like some answers have predicted. The bigger give-away would be its ability to stop too quickly; so, hopefully the shapeshifter has made it's hooves adequately slippery to properly emulate the right level of traction. But if the horse were to panic and have to stop of a dime, it could, which would give away that something is off about it.

The other real giveaways would be if a really observant person notices that the hooves aren't sinking into mud the way they should or if it runs into something it should be able to push through (like getting knocked over running into a small branch.)

Shape shifting involves occult/magical powers. Any such powers manifested in the 'normal' world involve the drawing of power from the aether. Shapeshifters are simply magically endowed humans with a very specific talent.

By concentrating they can draw magical power from the aether which manifests as ectoplasm. They can then draw this around themselves to form specific shapes and masses.

As long as they visualize and concentrate on the 'form' they need they can draw the needed mass from the aether. So if for instance visualize a horse ectoplasm will start to form around them flowing into the desired shape. Their human form changes form of course as well, flowing into an merging with the extra mass.

The effect only lasts as long as they concentrate on maintaining it. As soon as they stop doing so the spell collapses and;

This means of course your shapeshifter can form shapes larger than him/her self but not smaller. So horses and elephants etc are a goer but not mice or anything with less mass.

Weight is a force downwards due to gravity. What needs to be done is simulating gravity. I'm proposing 2 solutions, although they are far from perfect.

The simulacrum seems just animate matter. The hollow structure can then be used to our advantage. Inside the simulacrum will be air chamber(s). Something will move inside the air chamber, moving air out one side and in the other. This thing can then assimilate into the edge while a new one will be created on the other side, repeating the process. This way you can suck air into the creature and out the other side. (Alternatively you just have propellor blades.) This provides the pressure needed to keep the creature on the ground and look appropriately heavy. Multiple air chambers and entry/exit holes can be along the creature for pressure in the right direction. The holes can open and close at will and are hidden in the hairs. As the hairs are controlled by the simulacrum, it can ignore the wind of the creature moving the hairs. The larger the creature, the more air is available, making a sort of scaling along with the size.

Human are hyper aware of how things of middling mass and force should move, that is why CGI movement often just looks wrong even if the lighting is perfect. Your horses will never move properly because they don't have enough mass.

A real horse has about 25 times the mass of a Border Collie(1000/40lbs) and is roughly the same shape. Since both have the same density you can extrapolate the density of your "horse". Your "horse" is about 25 times less dense than it should be. That means the Horse is less than half the density of styrofoam. It is not light enough to float in air but only just. Unless it never goes outdoors it will be hard to hide.

64
Is there a credible way a shapeshifter could gain/lose body mass when changing forms?
5
How quickly could a "shapeshifter" lose mass, realistically?
0
What could be a plausible scientific explanation for a man who can transform different parts of his body into different parts of reptiles?

64
Is there a credible way a shapeshifter could gain/lose body mass when changing forms?
11
Different gravitational and inertial mass
10
How to Train Your Mimic (or, why would a Mimic be capable of domestication)
22
How would photo IDs work for shapeshifters?
3
How would tattoos for shapeshifters work?
8
How can a team of shapeshifters communicate?
5
How quickly could a "shapeshifter" lose mass, realistically?