How and with what would fairies build their houses? They need them because of the ridiculous number and variety of predators targeting them and the unforgiving weather. However, I don’t know with what they would build them, and how anything that they build would hold up. Their houses need to have roofs and possibly doors. There is very little magic in my world, and the weak magic that fairies have access to couldn’t help them.

My fairies have very poor memory, but other than that, their intelligence is very close to a human’s. Their tech level is very primitive except for a few that live in human towns and cities. They’re omnivorous and their predators are basically anything that’ll eat mice and/or bugs. They are very weak and have the endurance of a hummingbird. They are also diurnal. They can fly, however not for very long, but they can fly pretty high. They can also hover.

I should probably also mention the weather... the climate is very cold, so their nests/houses need insulation, and lots of it. It also rains often, and it’s pretty windy, too.

Anything involving the use of fire becomes intrinsically harder for smaller animals because small fires burn out faster than big ones, and small kilns dissipate heat faster and can't get as hot. This makes the production of many primitive materials like bricks, quicklime cement, and metal tools far harder for your fairies to achieve even if they were just as smart as humans.

Likewise, a small home made from thin walls will heat up/cool down much faster than a human scale home which would be a problem, especially for your desert fairies.

You also need to consider that many of their predators are much bigger and stronger compared to them than human predators are to us. So a house made from twigs or tiny stacked rocks could just be torn apart by a large bird, raccoon, etc.

So, to have a home that is strong enough to resist giant predators and insulated enough to resist weather, and simple enough for tiny primitive humanoids to build, your best option would be burrowing into something rather than building it from scratch. Since your fairies can fly, burrowing into something up high would be best to prevent ground predators from getting you. This could involve hollowing out a tree or cactus kind of like a woodpecker nest, or if you find a nice steep flat cliffside, that could be even better since it would keep certain tree climbing predators like snakes out too. Something like an old human quarry, coastal cliffs, or canyon wall would be ideal.

Humans have designed communities that are already a lot like this, in your case you just do it smaller and without any need for direct ground access. 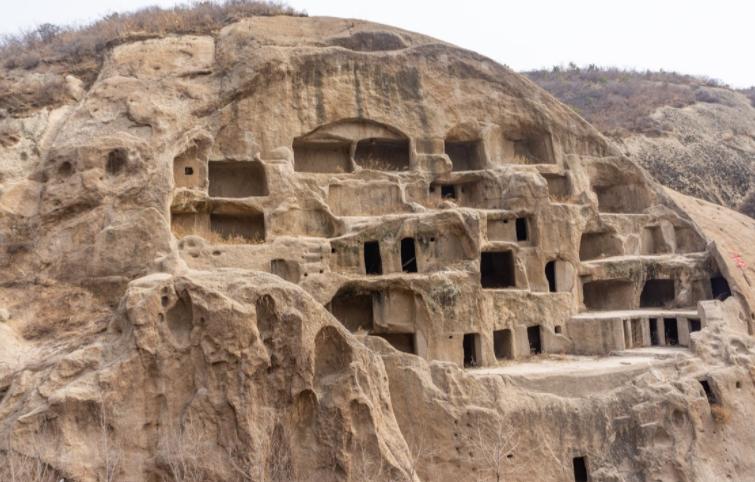 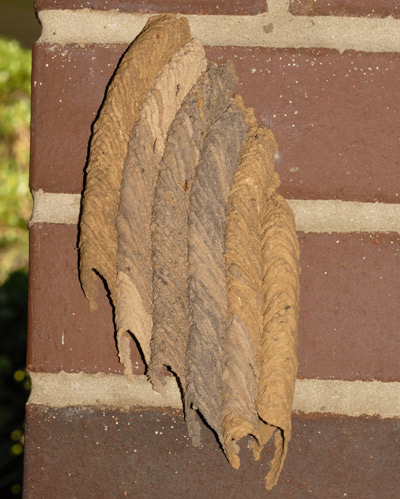 Mud is a fine building material. It is available everywhere. Depicted - elegant mud dauber wasp nests. If wasps can build this so can your fairies. Some wasps bring dry vegetation into their nests. They don't eat it, so maybe it is for insulation? That would work for fairies in cold climates also - line the mud nest with grass, fluff and scavenged fur.

Mud is a fine building material for human dwellings too.

Despite not being very strong, the intelligence of your fairies should allow them to "punch above their weight" when it comes to other animals, utilizing superior tactics, tools, and strategy like humans do. With the capability to kill larger creatures, fairies could take over prepared homes from other species. For example:

Alternatively, your fairies could attempt to reach symbiosis with another creature or domesticate the creature

Well if the fairies have almost human intelligence, then perhaps they could build something out of baked clay or use something similar to clay and use it as a cement of sorts?

I'm going to put this answer here mostly because I like the way they look.

We can look to the weaver bird for inspiration. 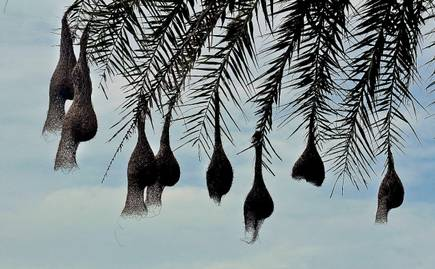 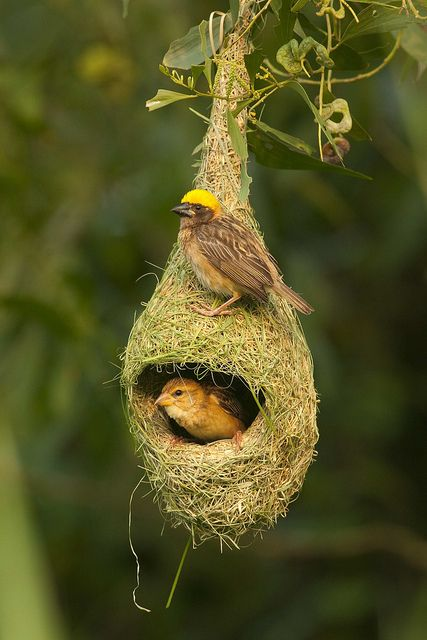 It could be built up like a bird's nest with their tiny dexterous hands. with some added fluff, I imagine it could be quite cozy. If you need more of a roof over your head, you can add some mud or layered leaves to shed rain.

A small opening would make it easy to defend. And you could link these little pods together and have a much larger communal nest, where combined body heat would help keep things warm. Certain types of communal weaver bird colonies can cover a most of a tree, looking like a mass of nest material hanging from the limbs dotted with hole openings.

Dragongeek spoke about them killing or domesticating some animal that already build nests. You can google for a bird called "hornero" that builds spherical mud houses. It's found in South America. Maybe your fairies can occupy those houses, domesticate the birds or replicate the building method... 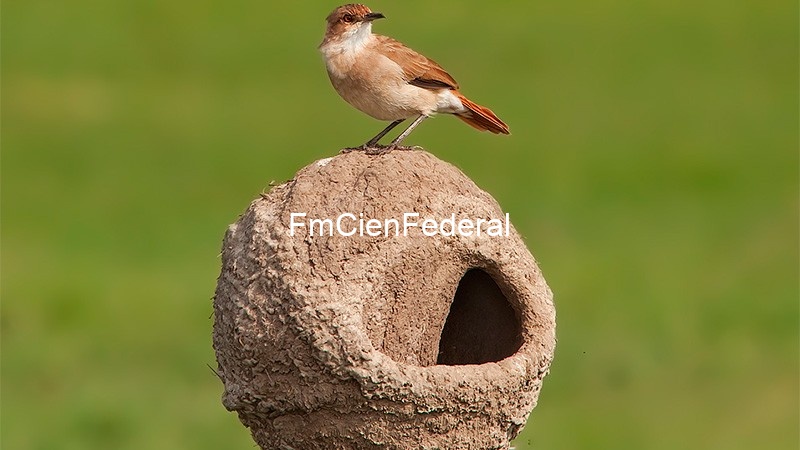 Wood, built into or onto trees. Or burrow under a bush. Look at shelter constructed by small flying creatures, faeries could do anything they do. Faeries could even make little bricks, or mortar together stones.

Your fairies are basically like humans, just very small (and can fly)

All the same issues that affect how we design and build our structures would be encountered with the fairies, with very similar solutions. A small sample would be:

So, basically their structures would not differ from ours. If material science is relatively equivalent, timber is the easiest and most cost-effective material that accomplishes protection from wet weather, and is cheap.

However, it has no insulative value, and little longevity. These issues may lead to the use of stone in conjunction with timber, with insulation through air gaps and sheep's wool. The development of better materials would lead the fairy society to progress to advanced industry eventually.

Just a note: your fairy structures would differ from ours with respect to their ability to fly though. So, with this ability, you may be able to:

Not the answer you're looking for? Browse other questions tagged fantasy-races architecture or ask your own question.

13
Hair based architecture
5
What kind of weapon would enable fairies to defend against the invading 13th century medieval army?
4
What should dwellings look like for a winged humanoid?
8
Fantasy Royal Flying Doctor Service
5
What are the quirks of half-breed slavery?
7
Would subways/trains be adapted to be practical for various fantasy species or would something else be invented?
3
What are the architectural considerations when an underwater species builds a city?
4
How to protect a tree house village from a lightning strike?
9
Fairy battle tactics