This question is linked to a couple other SE:WB questions of mine, which focus on my current worldbuilding project. The setting is essentially this: aliens encased the Solar System in the very distant past. The confining sphere is around 12,000 (twelve-thousand) AU in radius, does not exert a gravitational influence, and emits no blackbody radiation. The barrier structure acts indiscriminately. Any object that attempts to cross paths with the boundary, from asteroids and comets to dust motes and spacecraft, are quietly voided. They cease existing, yielding no stir of light or particles in their existential wake.

The world came to acknowledge this bewildering truth after the first few failed Starshot attempts--missions that sought to put about a thousand small spacecraft booking it at one-fifth lightspeed through three nearby star systems--the result of which showed the theoretically-sound and rigorously-tested hardware vanishing within a common range from the solar barycenter, the deep-space connections disintegrating like cosmic spindrift. Fast-forward a few centuries, after further Starshot-like missions provided more telling data and conclusive evidence for the existence of the entombing structure, an interest stirs in certain groups to survey and map the boundary. Numerous studies that analyzed the modified Starshot (maybe... "Wallshot") return data showed the likelihood of boundary "undulations," or large-scale structures embedded in the topology of the boundary surface. Snaking structures resembling undulating waves and rolling hills, crests and troughs several AU wide, oscillating less than a dozen or so AU nearer and farther from the mean boundary distance of about 12,000 AU. The financial backers of this group are also interested in knowing whether any "holes" exist anywhere on the boundary.

This organization wishes to construct a mission that might get them a clearer picture of the invisible structures, say, at one square AU resolution. Their constraints are money and time--chiefly the former.

What probably wouldn't be proposed is sending a Starshot-like probe to each and every square AU block at 12,000 AU distant. I calculate that a little over 700 million probes would be required. That may only be a single small asteroid's worth of mass, but if we launched one probe every second, it would take a little over twenty-two and a half years to send them all out. This isn't necessarily a bad thing. Twenty-odd years is actually rather acceptable. However, I think there may be better ways. Cruder methods that might take advantage of the nature of the boundary that betrays its existence.
Before I looked at any math, I thought of a series of probes that might be sent near the boundary to shoot beams (narrow cones, I guess) of hot, excited gas toward it. Sensors on the probe would aim to pick up the EM emissions of the radiating gas (maybe ionized hydrogen?), noting where those emissions dropped off. Then I thought, "why send probes at all? Let's do it here." Perhaps we could build some sort of mother-of-all particle accelerators here, near Earth, to send bursts of ionized hydrogen out into the distant Solar System where space-based detectors, again relatively near Earth, might find the emissions drop-off.
I can see a number of ways this wouldn't work, chief among them that we wouldn't be able to keep the particle density high enough at that distance for detection. Temperature would also be an issue, which goes hand in hand with density I suppose. The gas would expand as it travels, cooling off. (Perhaps it would be possible to detect the absorption spectrum of light from the Sun reflecting off the higher-density gas?)

Another thought also happened. The Sun is basically doing just that right now, casting a solar wind of mostly electrons, protons, and alpha particles omnidirectionally, albeit tenuously. From the answers on my question here, it doesn't seem like detecting the drop-off of solar wind density and temperature is very feasible, despite its high temperature of around 7,000 Kelvin. I wondered if artificially "illuminating" the plasma, maybe with powerful radiowaves or an electron beam, to above the threshold for observation/detection might be feasible.

With all that, is such a survey operation feasible? Could we project and then detect ionized hydrogen or some other plasma in this way? Is there some other better method of mapping the barrier?

In my answer to your previous question, I suggested that we wouldn't believe it was a spherical destroyer of everything until we caught evidence of it destroying something. And that would probably be either a two-part probe (impactor and camera/radio), or a manned space craft with a live feed sent to investigate why the probes broke there.

For the purposes of this answer, I'm assuming that hasn't happened. That we've lost a few starshot constelations, we took the vote, and decided "Barrier stopped them."

So the barrier would be implicitly partially surveyed, some observations on what I think humanity realises when we reach D-"Yes there is an alien barrier stopping our probes wtf"-day:

I suspect the image we're able to form looks something like this: 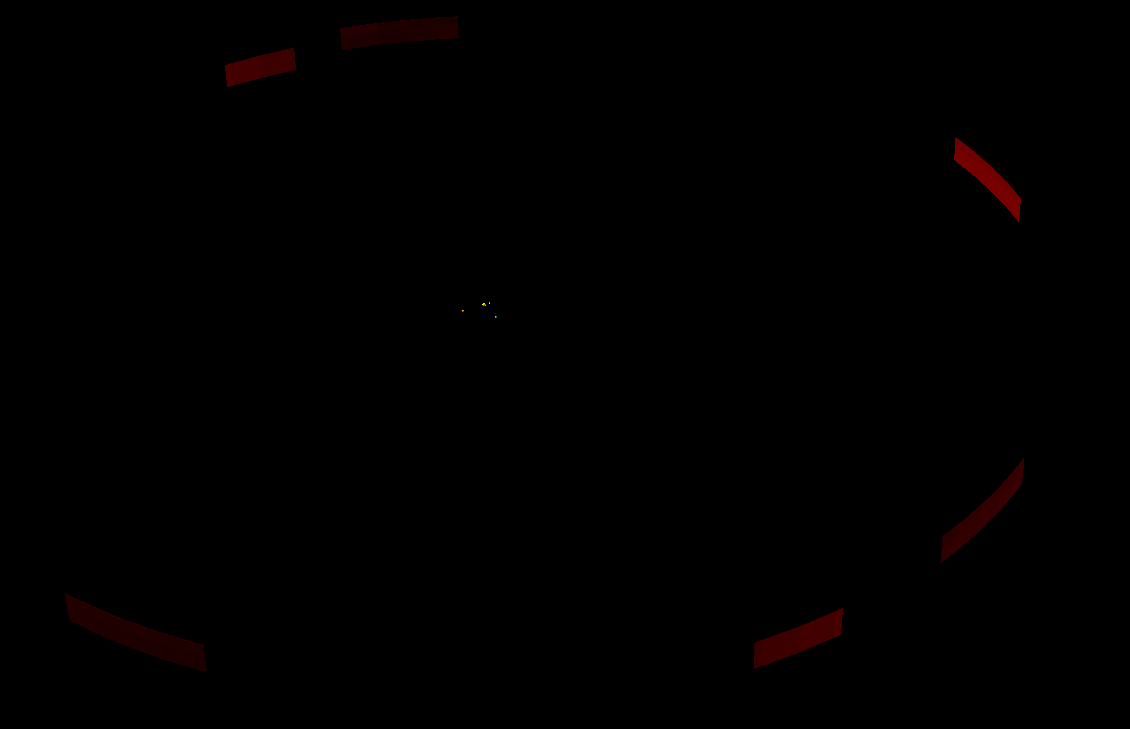 The known areas of the barrier are in red. They're not entirely co-planner, but they are very close to the eliptic plane.

Should also note that its only starshot probes which have detected this. Voyager probes wont pass the barrier until ~4500AD (and they're power source has run flat). Starshot are going fast, but this information has taken a long time to learn.

So what do we do first?

Anyways, when that image is presented, the next mission is obvious, it will be "Lets go over it". This is a long and complex orbital trajectory, I tried using NASA online orbital transfer tool but I couldn't calculate the full solution - but I can tell you'll get 7 good launch windows in ~20 years. You're looking at basically the Ulysses launch profile with a few Jupiter fly bys (each taking ~1-2 years) to stretch the orbits up. Even sending a cubesat sized or smaller probe with only a power source and radio, this could easily be a multi-decade mission.

That probe will detect the top and/or bottom is a barrier too. It will detect it by stopping to respond. We don't know how the barrier works, or even exactly where it is, but we do know it's roughly spherical.

Once we've confirmed that the top and / or bottom is blocked, I suspect we're not going to try to map out the sphere to "see if there's a hole here" by bombarding it with millions of probes, I suspect we'll assume it's spherical, and try to analyse what's going on at the barrier to try to get through it.

Remember we don't assume that aliens are out to get us. Nobody at NASA is going to say "Well obviously this is hostile aliens out to Zoo Hypothisis us.". They'll be operating under the assumption that what is there can be explained by normal physics, and thus, is beatable. (oh there's a spherical shell of ultra fine fast moving diamonds at 12,000AU, lets study that! Maybe this shield design will allow a craft through.)

This means a mission designed to explore exactly what's going on here. Why are our probes stopping to work here?

We're going to launch something, with an almighty tonne of equipment, to head out there, stabilise relative to the shell (which'll take a tonne of fuel) and take readings. We'll look for every type of radiation, every type of quantum particle, we'll shine lasers into it (which'll disappear, that'll be confusing) eventually we'll launch little things into it (with all our sensors running) and record it on camera disappearing. Then we'll analyses the data, find the mass / energy just vanishes, scratch our heads, and retry it over and over.

It'll probably escalate to someone nuking it.

22
Aliens englobed the Solar System: will we notice?
12
Starshot fails--do we know why?

21
Is it possible to place a permanent probe on Uranus?
22
Aliens englobed the Solar System: will we notice?
8
Using planetary/stellar media for lasing
34
Finding Earth on a star-map
5
Ice moons and giants? That close to the sun?
12
Starshot fails--do we know why?
6
Usefulness of launching probes to verify the existence of a hypothesized planet
7
Aliens pressure cook the Solar System, do we notice?
2
Saturnian Zeppelin Cities: can I use Aerographene coated with Titanium as the hull material to prevent getting crushed by atmospheric forces?