This question is very closely linked to my other question here: culture changes to reliable and mandated birth control used from puberty until ready to conceive

Lets say that a reliable birth control is mandated in the near-future (where birth control is safer and more reliable then now). The birth control can be easily deactivated when someone is ready to have a child, but it ensures that pregnancy rarely occurs unless the mother intended for it to happen.

The question above asks about the effect of birth control in general to sex and culture. For this question I want to look at a more specific area, what is the effect of a child never (well, very rarely) being born to a mother who did not plan to conceive?

What happens when you never have to deal with an unwanted baby? How would this effect things like child services, and adoption? How would the society look half a generation later when you have a generation of now-adults that consists of no-one born to a parent that never wanted them?

I know some studies have suggested crime rate dropped due to legalizing of abortion avoiding children born to parents that didn't want them who, supposedly, would be more likely to engage in crime due to being raised in the sort of home life where your unwanted and/or unloved. These studies are controversial due to the fact that their about abortion, but would similar, or even more drastic, effects occur where birth control prevented these pregnancies from occurring?

If a change in society would occur when the first generation of all-planned children grow up how big, or small, might the change be? would there be any negative results of it?

Some degree of social services would no doubt have to exist, but would it and adoption look any different?

Presumably the total population size (or growth) will be effected to some degree, though I'm not sure if it would be a noticeable difference. If it would be then what effects would the smaller population density have?

This website may have all the answers you need, though the information is US based. Of particular interest is the graph at the top: In the US, only 49% of pregnancies are intended. Note that there is a huge difference between unintended and unwanted pregnancies; a difference of 31%, in fact. 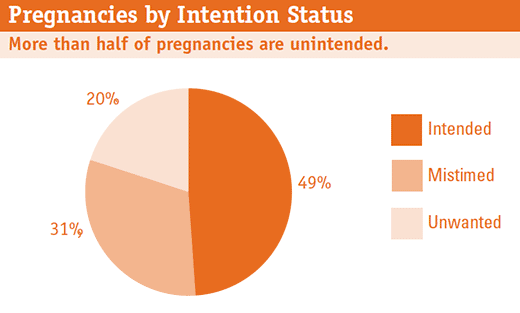 More than one in 10 single men indicated that they did not know about the pregnancy until after the child was born. Among single men aware of the pregnancy, nearly three out of four births were reported as unintended.

With that data, we can surmise that population growth would drop by at least 51%, which is a staggering amount. If growth didn't return, the population of the US would plummet dramatically, as fewer and fewer children would exist.

That doesn't count cost to the parent(s), either, and it's still a significant amount of money.

I imagine that several things would happen within a single generation:

Unwanted pregnancies can have fairly devastating and life changing effects on the mother. Generally there is a heavy social and economic burden. Sadly, the economic and social state of the parents has a direct impact on the children, which is why a large rate of unwanted pregnancies increases the crime rate for the next generation. If your mother was socially and economically marginalized because she had to quit school or stay home or developed health issues, you are more likely to be marginalized as well, and growing up marginalized gives you little reason to respect the laws and rules of those "other people".

So yes, eradicating unwanted pregnancies would reduce eventually social effects that are impacted by social marginalization of parents. "Amusingly", one of those is sexual promiscuity so that countries that resist abortion because it encourages sexual promiscuity might end up with higher rates of teenage pregnancies.

I am not going to list the effects since there are really too many variables and also because the topic is somewhat politically sensitive. (So that for pretty much anything I could say, somebody else has argued the opposite.) But you can probably safely assume there will be less persistent social and economic marginalization and thus there will be less persistent marginalized social groups.

Not the answer you're looking for? Browse other questions tagged society culture near-future .

12
How would society function with only one male per generation?
18
How would gender roles be affected by a society where parents could control the sex of their child
34
Warrior caste in an utopian society: what would keep them peaceful for centuries?
28
Why would a 'first world' alien opt to have a brood of dumb children rather than one smart one?
3
Preventing a Runaway Societal Effect
3
How can succession rights work within group marriages?