How many Ultra massive black holes should be added to a map of known black holes?

I was wondering how many Ultra-massive black holes can be added to the list of 8 known black holes with mass over 10 billion solar masses within 1 billion light years.

Looking at our current maps, the main super and ultra massive black holes are located on almost opposite sides of the sky where matter is grouped in superclusters or along filaments with further out massive black holes being on the other sides of our surrounding voids, so the locations of where or if I will add new massive black holes isn't an issue but how many more to add is what I am unsure of.

Denser areas seem to be where the largest black holes and their galaxies are located but some are isolated as their galaxy has merged with or thrown out their neighbour galaxies.

An interested video I watched recently was about "Shadow galaxies". These are very large but dim galaxies that have remained un noticed until recently, as there has been no interactions for these galaxies with others due to their isolation they have not had new starburst stages so they remain very dim and full of ancient and relic stars. It is believed at least 25% of our galaxies are this type of galaxy.

Using 8 as the current known value and as we have many known large galaxies who's nucleus is too bright to estimate the mass of their central black hole and as we have many more local galaxies to observe, What would be a good true number of ultra massive black holes over 10 billion solar masses to be considered when making a map of local universe within 1 billion light-years?

Natarajan & Treister 2008, when exploring the mass distribution of very massive black holes, determined from x-ray emissions of populations of active galactic nuclei (AGN) that over cosmological distances, the mean ultramassive black hole density should be at least $\sim3\times10^{-6}$ per cubic megaparsec. If we simply multiple this by your desired volume, we find that a sphere 1 billion light-years in radius should host $$N=3\times10^{-6}\;\text{Mpc}^{-3}\times\frac{4\pi}{3}(10^6\;\text{light-years})^3\approx360\;\text{UMBHs}$$ This is two or three orders of magnitude higher than Nip Dip's estimate. Note that UMBHs are expected to be rarer in the local universe, i.e. at lower redshifts and much closer to the Milky Way than gigaparsec distances. Locally, the authors derive a density of $\sim7\times10^{-7}$ per cubic megaparsec.

I should also note that the authors describe their density as a "conservative" estimate based on predictions of supermassive black hole accretion rates. On the other hand, it's possible that they overestimated the behavior of high-mass UMBHs, but they claim that this is unlikely.

The number of ultramassive black holes on your map

Now, how many UMBHs should you include on your map? Well, it could be all of them, if you want. An omnipotent civilization capable of traveling far enough to need such a big map might very well have found and mapped all of these ultramassive black holes. On the other hand, keep in mind that this encompasses an area 2 billion light-years in diameter. That's a lot of space! In reality, it's unlikely that the mapmakers will have found all of them. So you have some leeway; you could put only 100 or 200, and make it clear that the map only includes known UMBHs.

It seems that SMBH and UMBH masses follows a double power law. The point where the mass distribution breaks from one of those power laws to the other appears to happen around a mass of $M_{\text{BH}}\approx10^{8.5}$, at which point it dips sharply. Here's a plot from Natarajan & Treister, showing the quantity $M_{\text{BH}}\frac{dN}{dM_{\text{BH}}}$ as a function of black hole mass, with four different curves representing the distribution from galactic velocity distributions (solid line) and three different values of accretion efficiency (dotted lines, $\epsilon=0.1, 0.05, 0.5$): 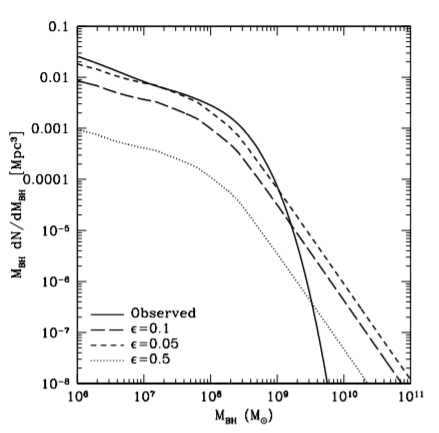 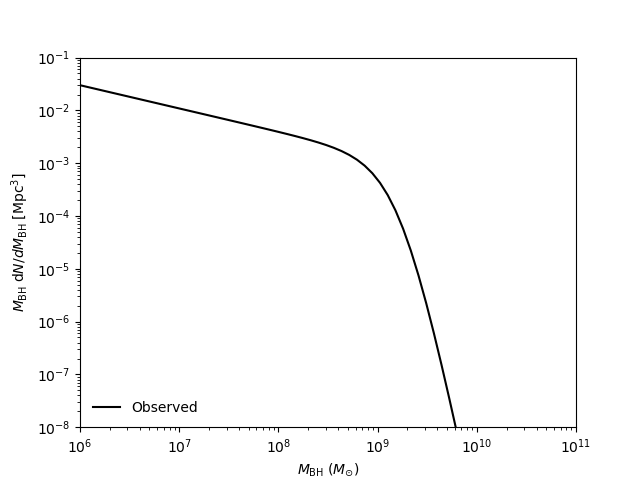 From this, you can find $\frac{dN}{dM_{\text{BH}}}$ and then numerically integrate to find the fraction of UMBHs that lie in a given range.

There are a couple of other points I wanted to mention.

I'd say somewhere between three and fifteen. After all, I think there is that number within 1 billion lightyears of the Sun. Holmberg 15A and NGC 1281 are good examples. But since you're worldbuilding, you could do any number, and even place an ultramassive black hole within your galaxy.

7
Could I observe the black hole that created my area of space/universe?
3
What would the sky view be like of a final stage massive merged galaxy?
8
Which type of star would be best used for a Shkadov thruster to reach Andromeda as soon as possible?
5
How could a galaxy be altered to house hundreds of thousands times more Stars?
4
Is a particle beam the best method to fire a black hole at a target?
3
When designing a map of the local universe how should currently unknown/obscured areas be treated?
6
How would a K3 civilization collect the majority of the universes available mass in the form of Intracluster gas?
6
Life and Galactic Age: What galactic ages make a planet habitable?
3
Is it possible for a future civilization to concentrate the galaxies (or some of them) of the universe?