Is it possible to melt and accurately mould LEGO plastic using only neolithic technology?

One answer suggests making weapons and other artifacts by melting and moulding LEGO plastic (ABS).

Is this in fact possible using only neolithic technology?

Acrylonitrile Butadiene Styrene, or ABS, is an opaque thermoplastic. It is an amorphous polymer comprised of three monomers, acrylonitrile, butadiene and styrene. ABS is most commonly polymerised through the emulsification process or the expert art of combining multiple products that don’t typically combine into a single product. https://www.adrecoplastics.co.uk/abs-plastic-properties-and-application/

Early Neolithic farming was limited to a narrow range of plants, both wild and domesticated, which included einkorn wheat, millet and spelt, and the keeping of dogs, sheep and goats. By about 6900–6400 BC, it included domesticated cattle and pigs, the establishment of permanently or seasonally inhabited settlements, and the use of pottery. https://en.wikipedia.org/wiki/Neolithic

Let's try it and see!

So I didnt have any Lego bricks free, So I used abs 1.75mm filament from my 3d printer, (which is thicker than the wall of a Lego brick so actually harder to melt)

I put it on a ceramic plate on my bbq (fire and ceramic are both neolithic), and it melts down to a sticky blob. I'm able to form it with other ceramic tools (buts of broken tile I found in my backyard) but lack a mould to try to get a perfect shape.

However the stickiness makes it really easy to work with with basic hand tools, sort of like glass blowing when you use wet newspaper to shape it with your hands. just using a ceramic tile I was able to mould a plausible first attempt at an arrow head. With practice I expect I could do a lot better.

Experimental setup. A plate, a bbq, some chunks of broken roof tile, and abs plastic from my 3D printer: 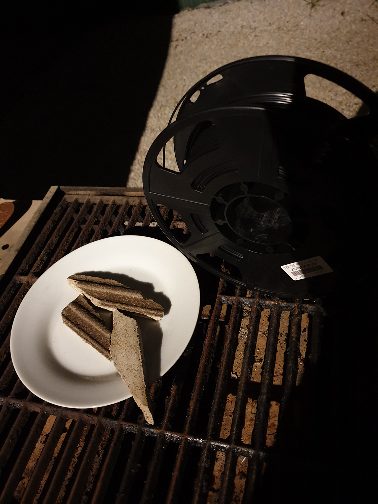 And here's as good as I was able to get it in a few minutes of my first attempt at shaping moulten plastic by hand: 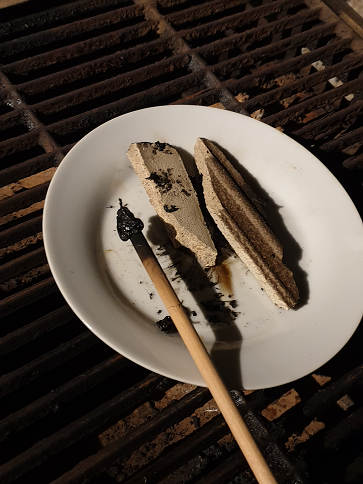 I wasn't able to the get tip sharp on my first attempt, but it's sharp on the sides there.

Using a proper "Mould" may actually be harder than just shaping it using hand tools, as it is sticky and you'll need to push it into the mould with some pressure to get it fully sharp. But I'd say totally possible to melt and shape ABS plastic using only ceramic and fire.

My son has a plastic curly drinking straw. I discovered the hard way that it becomes ductile at somewhere less than 100 degC when it went through the dishwasher the first time. All was not lost though - I dunked it in boiling water repeatedly to reshape it.

Ash in his answer has made the classic mistake of using an uncontrolled temperature, namely a barbecue plate. The result is significant amounts of burning instead of just melting. Liquids boil at a (relatively) well-defined temperature, so finding a suitable liquid to boil will allow your cavemen to melt the Lego without burning it. Checking Google,ABS becomes ductile at 40-80 degC, and actually melts at 190-270 degC.

So the first option is simply to use boiling water for reshaping as I did. Smiths do not melt iron and steel, they simply heat bars until they're ductile and then shape them as required. Glass blowers work in exactly the same way. There's no reason you couldn't use this to construct any ABS shape you want. It will tend to suffer from imperfect joins if you try to weld two pieces together, of course.

If you do want to actually melt it though, use animal fat. The smoke point of beef fat is around 200 degC, but if you render it to tallow then the boiling point of that is 338 degc. Plenty hot enough to melt your ABS, but not hot enough to burn it.

36
LEGO™ as a defence against barefoot warriors

4
Let's say it was possible. So how might one explain magic using dark matter and dark energy?
3
Would it be possible to construct an electric generator using only ionic conductors like salt water?
4
Could a society attain 1800s technology if limited to using copper and bronze?
27
How to prevent humanity from using alien spaceships and technology exclusively?
4
Can I kill all humans using only volcanoes, erupted ash and magma?