In my world each person has the ability to call upon the power of a star; using it to further whatever end they’d want—i.e. using the sun’s energy to power a spell. However, they can ONLY call upon the power of the visible stars in the sky and once the stars are on the other side of the planet they cannot call on them. An example of such a star is the sun. People can call upon its power while it is in the sky, but once it sets they cannot.

Now, granted that the sun is the only visible day star—so, therefore the only star whose power people can call upon—is there a way for me to make other stars other than the sun visible in the day sky, thereby increasing the number of power sources?

It's already possible to see Venus during daytime (if it's not too close to the Sun, and well above the horizon); the main problem is that you need to know where to look.

Venus has a magnitude of about -4; the brightest star in the night sky, Sirius, is about -1.5, which is a factor 10 fainter (magnitudes are logarithmic, a lower number means brighter, and 5 degrees correspond to a factor of 100). If you put Sirius three times closer to Earth than it is right now, it will appear to be nine times brighter and be visible during daytime.

Some supernovae (exploding stars) in our own galaxy were visible in daylight for short periods, e.g. the one from 1054.

I think a less thick atmosphere would work too, but can't do the math, and it has other effects on the life on Earth too. Bringing some bright main line stars closer (but not within the Solar System, of course – think Alpha Centauri distance) doesn't.

Part One of Five: Spells to See Stars in the Day Sky.

And thus that type of spell might enable someone to see their magic stars during the day and the night. But no star will be visible above the horizon, in day or in night, more than about half the time if your world is a rotating sphere. So people will need to have magic links to at least two stars on directly opposite sides of the sky, and preferably more stars spaced closer together.

Part Two: A World With a Less Dense Atmosphere.

You could create a world with a less dense atmosphere but a higher concentration of oxygen in that atmosphere so people have enough oxygen to breath.

Humans need the oxygen to breathe, and some carbon dioxide for plant photosynthesis, and some water vapor for rain, and some nitrogen for plants to acquire from the atmosphere. The total atmospheric pressure could probably be as low as 50 or 25 percent of its current value for humans to survive, especially if one of the things they use star magic for is helping their breathing.

That should reduce how much the atmosphere dims the light of the stars.

Part Three: A Nearby Star Cluster.

Make a lot of bright stars much closer to your planet than is the case in Earth's part of our galaxy.

One way to do that is to make your planet and its solar system happen to be passing though an open star cluster which has a number of hot young stars of high luminosity. Note that those hot young high luminosity stars will have different spectral types than any star expected to have habitable planets, and thus will have higher proportions of ultraviolet radiation than the star of the planet would. Possibly ultraviolet light is useful for magic.

Or possibly the solar system is passing near to such an open star cluster, and thus those super bright stars visible during the daytime may be seen from only one direction.

Your planet could be in a double or multiple star system. In that case its own star that it obits will appear as a disc in the sky and seem to be a sun. One or more of the other stars in the system might possibly appear as discs also. But some or all of the other stars in the system may be far enough away to appear a dots of light, and yet many times brighter than any star in Earth's sky, so they would be visible during the day (when above the horizon and not hidden by clouds).

So you should study multiple star systems and perhaps come up with a planet orbiting only one star in a 5 or 6 star system, with the other stars far enough away to appear as dots of light, but bright enough to be visible during the day.

Of course your setting might be a fantasy world flat earth surrounded by a geocentric system, in which case the gods might have built their celestial sphere closer to the flat Earth and made the star lamps many times brighter, so that they could be seen even during the daylight on the flat Earth.

By filtering out the wavelength of light refracted by the sky. Either mechanically by sunglasses or organically by a protein in the lenses or viscous jelly of the eye. The objects in the world will still be mostly visible since they aren't the same color as the sky. 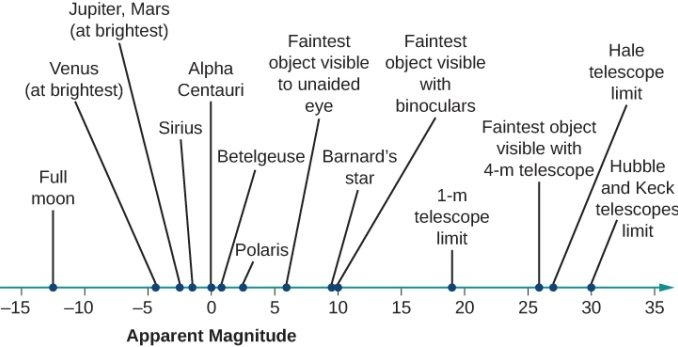 We can see the moon and Venus in the sky when the sun is up. So optical attention 4-9 magnitudes of just those wavelengths of blue refracted by our sun, or your star+atmosphere of your planet, would make many stars visible during the day.

Use the sun during the day to power a low level filtration/polarisation spell to block out the local sun rays. Then power up with your multiple distant stars.

Why you need distant stars to power you spells, when you have a major source of solar power right next door, I don't know. You will have to address this somehow.

It could be that it's not so much the amount of light that powers your magic spells but rather the age or spectrum of light you use.

The long and the short of it is: get rid of the atmosphere.

On the moon, stars are visible all the time, no matter where the sun is, because there is no atmospere to scatter the sunlight.

Clear "line of sight" does not necessitate you see.

Line of sight means no obstructions in the way. On a very dark night, I may not see my friend on the other side of a field. But I know he is there; I saw him head that way and he just now turned off his flashlight. If I call him he will hear me. He is in my line of sight; there is nothing in between. It is just dark.

So too the stars. They are up there, in line of sight, but we are dazzled by the sun. If there were an eclipse or we were above the atmosphere we could see them. There is nothing in the way. We can call them too, sight unseen.

If my friend has kept walking thru the dark and is down over the hill he will not hear me when I call. Once the earth has turned and they are no longer in line of sight we cannot call on the stars either, day or night.

There're multiple problems, following the other answer you must have a world with less dense atmosphere, stars more near the planet, but I think the biggest problem is the weather condition, in a foggy or cloudy day or night you can't see the sky, in this way it's not possible to see your linked star and you can't use the power to enhance a spell. You can choose some ways to use this power:

In other cases you must have a world without atmosphere for seeing all the stars around the planet during all the day.

As this answer states, it is possible in infrared - since the Earth like atmosphere scatters mostly blue light. So either 1) the eyes of your species evolved to see longer wavelengths, or 2) there is a spell that alters your pupil/retina (either permanently or temporarily).

(it is of course possible in visible light with a telescope, but you specified "naked eye")

Not the answer you're looking for? Browse other questions tagged science-based magic space astronomy stars or ask your own question.

12
How can my accidental time travelers determine the year using star/stars?
13
How could a dust cloud form around a middle-aged star?
21
Close the door on your way out - Life lit by a blue dwarf star
13
Is it possible for one star to orbit another?
7
Visibility of a Red Dwarf Companion Star
8
Can you make a star from other gases, and how long would they last?
5
Sun-like sky objects in a flat world?
13
What would the sky look like if there were 100 Sun-sized stars exactly half a light year away from Earth?