Can a species have different ancestors? 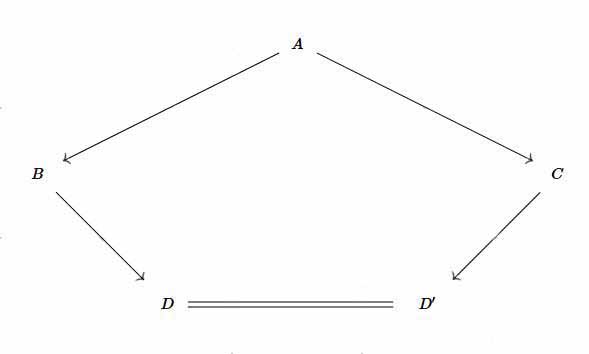 $A$ is an original species.

$B$ and $C$ evolved from $A$ but reproductive isolation.

$D$ and $D'$ are almost the same, so they are not reproductive isolation.

My question is that is this phenomenon to be possible?

If it is possible, is there any example of such species in nature?

The are many allopolyploid plant species, that is, polyploid species with chromosomes derived from two or more diverged taxa. For example, common wheat, Triticum aestivum, is an allohexaploid carrying chromosomes from two separate ancestor species, einkorn wheat Triticum urartu, and a goatgrass, Aegilops speltoides. (Note than two ancestor species are not even in the same genus.) In general, the taxonomy of wheat is an unsettled mess, with three different ancestral species (Triticum urartu, Aegilops speltoides and Aegilops tauschii, multiple genome duplication and hybridization events, and disagreement between traditional morphological taxonomy and molecular taxonomy. (Note how the table in the Wikipedia article needs to have separate columns for species recognized by traditionalist morphology-based phylogeny, and species recognized by ultra-modern molecular phylogeny.)

In the genus Brassica of cruciferous vegetables we find a well-known relationship between six species, three ancestral diploid species, and three derived allotetraploid species. Note that all six species are important crops: 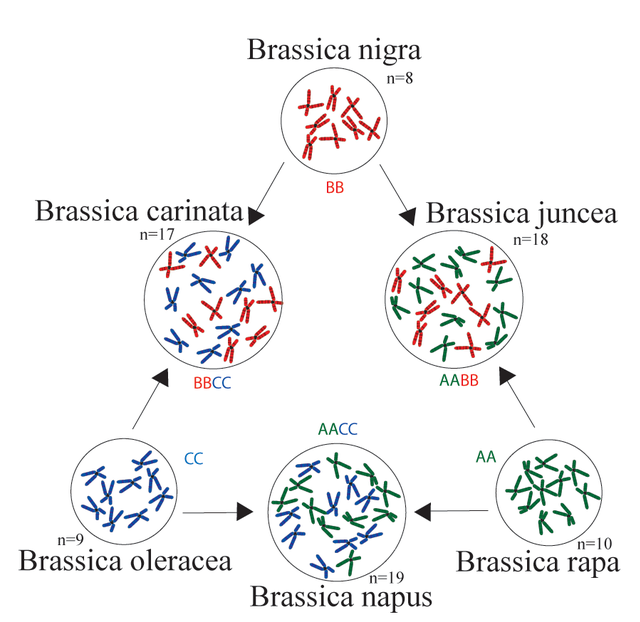 The so-called triangle of U showing the relationship between three ancestral and three allotetraploid species in the genus Brassica. Brassica nigra is the black mustard; Brassica oleracea is cabbage, broccoli, cauliflower and so on; Brassica rapa is turnips; Brassica juncea is the Indian mustard; Brassica napus is rapeseed and rutabaga or Swedish turnips; and Brassica carinata is the Ethiopian mustard. As for U himself, he was a Korean botanist, Woo Jang-choon, who, during most of his life, lived under the rule of Imperial Japan and used the Japanified name Nagaharu U. Diagram by Adenosine, Nashville Monkey et al., available on Wikimedia under the Creative Commons Attribution-Share Alike 2.5 Generic license.

In animals, examples of species carrying genes originating in more than one ancestral species are rarer but they do exist.

One of the best studied cases is the genus Panthera of big cats, where four out of five extant species (the tiger, the leopard, the lion and the jaguar) have been found to carry genes originating in other species of the genus; for a nice diagram see Jordana Cepelewicz, "Interspecies Hybrids Play a Vital Role in Evolution", in Quanta Magazine, 24 August 2017.

The great cats of the genus Panthera comprise a recent radiation whose evolutionary history is poorly understood. [...] We observed pervasive genealogical discordance across Panthera genomes, caused by both incomplete lineage sorting and complex patterns of historical interspecific hybridization. We found [in jaguars] at least two genes (DOCK3 and COL4A5, both related to optic nerve development) bearing significant signatures of interspecies introgression and within-species positive selection. These findings indicate that post-speciation admixture has contributed genetic material that facilitated the adaptive evolution of big cat lineages.

The genus Panthera is a remarkable group to investigate these issues because it comprises five big cat species that arose from a recent and rapid diversification process. Understanding the history of their unique features [...] depends on resolving the underlying phylogeny of the Panthera clade, a task that has been notoriously difficult to accomplish. Recent analyses have indicated that genealogical discordance caused by both incomplete lineage sorting (ILS) and post-speciation admixture has contributed to produce such a complex system.

The lion lineage exhibited the most widespread signatures of ancient admixture, likely due to its broad historical range throughout much of the Holarctic region, overlapping with several congeneric species. These results considerably expand the recent evidence for hybridization between the snow leopard and the lion + leopard ancestor [...] and reveal a much more complex history of post-speciation admixture in this group than was previously appreciated.

Yes, as long as the genetic distance between B and C isn't too large. The result is a hybrid species, or a multi-species hybrid complex[*].

Fertile hybrids that can generate a new species are not common among mammals, but hybridization is reasonably common in fish and amphibians, and happens all the time in plants.

[*] For example, there is a weird group of Australian carp which form a hybrid species complex between an all-male line and an all-female line which each reproduce semi-clonally, requiring sex with a host species to reproduce but displacing the host chromosomes; a disexual population which serves as the host for the aforementioned sexual parasitism; and hybrids of the three.

Homo sapiens is an example of such a species. People (with non-African ancestry) have genes from Neanderthals and Denisovans. There is some debate about whether those are separate species or sub-species of Homo sapiens, but they were almost certainly reproductively isolated from our main line of descent, apart from the cross-breeding events that got us their genes.

As opposed to convergent evolution, involving similar features coming from very diverse species(like compound eyes in octopi and humans), parallel evolution is similar traits arising independently from similar but distinct species. Species A may have lived in the plains, and B moved to the mountains and became nimble at climbing rocks. C moved to the coast, and became good swimmers. Once B and C are sufficiently different/incompatible as to be different species, they are separate. This is divergent evolution. Now let's suppose a disease kills off A. B and C move to fill the niche left on the plains, and each evolves similar traits to survive the plains. Only now the two species may be incompatible with each other due to other reasons (chromosomal rearrangements, mismatched mating seasons, whatever). The resulting two species, D and D', might look identical but be in competition with each other for resources (namely the plains).

If B and C remained genetically compatible but simply didn’t reproduce, such as if they were geographically separated, then they would be two species.

If D and D’ later met and did successfully reproduce, then they have merged back into a single species.

However, if both sides evolved enough for D and D’ to be considered separate species from B and C, most likely due to different selection pressures on each side of the divide, then it seems unlikely that they would remain genetically compatible or even try to reproduce when they met.

I’m not aware of any examples, but it’s theoretically possible if the separation wasn’t very long. Most likely, we would retroactively declare B, C and D/D’ to have been subspecies of A all along. This may be, for example, what happened with Neanderthals and Cro Magnons merging.

Lichen is an example of a hybrid organism, made from algae and fungi. It has many distinct features, breads as a single organism and can grow where neither of its components could.

The DNA does not need to fuse immediately together, while in case of chloroplast and mitochondria many genes were finally relocated into nucleus, with only tiny genomes remaining inside the former symbionts.

38
How would multi-race humanoid evolution happen?
32
Evolution of species with separate sapient and non-sapient forms?
3
What needs to be different in order for a parthenogenetically reproducing species to evolve sentience?
7
How quickly could a population of humans evolve into a different species?
15
Is it possible that technologically-capable, spacefaring species would depend on a single source of food?
9
Is a single sex species feasible?
9
How would it be possible for a species to evolve naturally occurring halos?
11
What kind of environment would favor hermaphroditism in a sentient species over regular, old sexes?
7
Can insects evolve their basic anatomy to grow in size?