What Might Cause Massive Landfall Of Dead Marine Creatures?

There is a stretch of coast in my world, fairly typical mudflats and beach (a bit smaller than the Wadden Sea). It is often called the Dead Shore because year round the place is littered with the corpses of marine life. From giant rotting whale carcasses, massive squid, and just oodles of fish and stuff. Enough regular dead things to support an ecosystem of scavengers, both human and animal.

What might cause this constantly replenishing beach of rot? 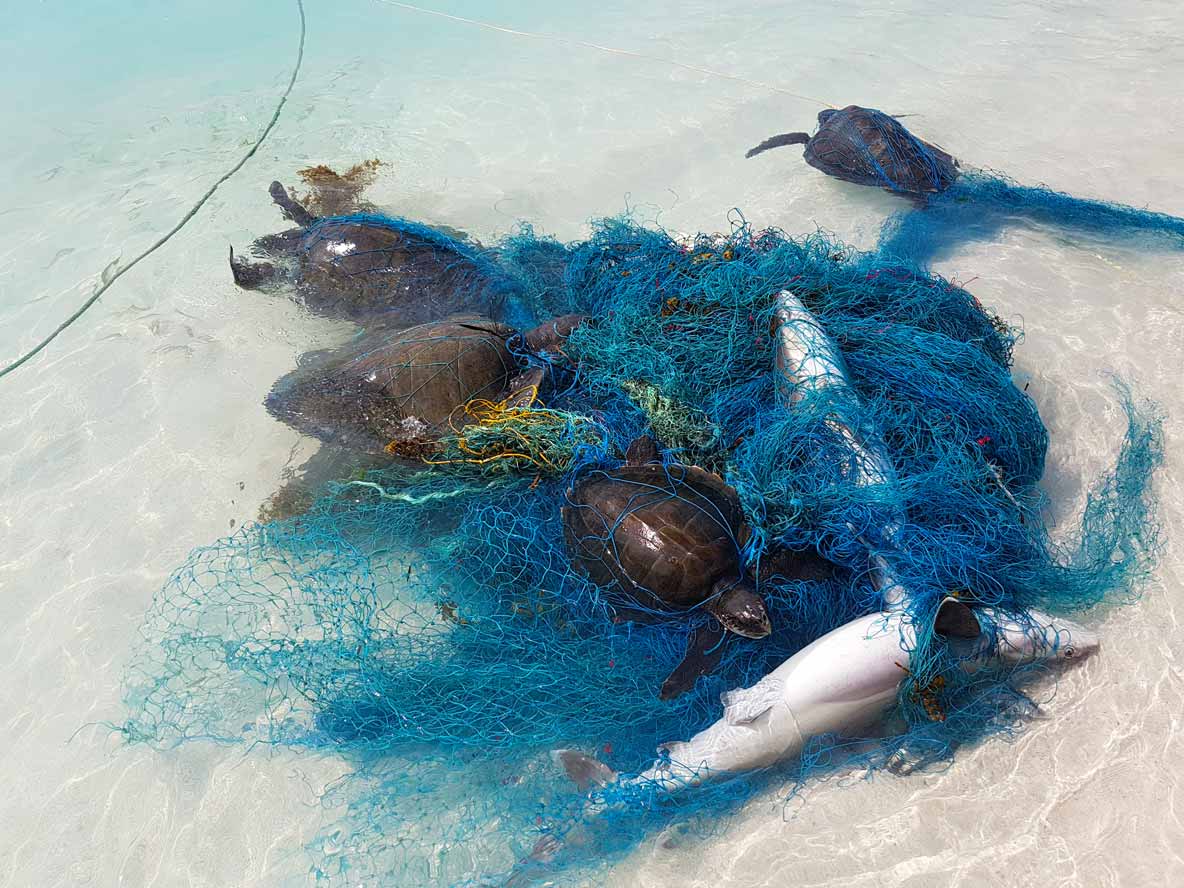 In our world, discarded fishing nets move thru the ocean, trapping animals who get fouled in them. I suspect there is a principle at work much like that of the La Brea tar pits - more predators than prey are trapped, because the predators see trapped animals, come to eat, and are themselves trapped. In our world ghost nets can trap even large animals like sperm whales. They can drag those nets for a long time, the whales. It is a sad thing.

In your world these nets are natural phenomena made of tough weedy fibers. Maybe the nets are a dispersal mechanism for these plants, and the additional nitrogenous fertilizer they derive from snaring marine life helps the baby net plants get established. Or maybe the net plants are pelagic and live rootless in open ocean, supplementing their photosynthesis with a diet of protein and mineral rich meat.

The seafaring net plants with their dead and dying catch are thrown up on your beach because of ocean currents.

Many animals have an internal compass. A big Electromagnet field can mess with their compass, sending animals into your beach instead of their usual migration route.

Tornados, hurricanes, and even big storms have been known to pick up marine life and dump them. Sometimes considerable distance from the coast

If the tides rise a constant amount of distance vertically, (they basically do), and the terain is non permeable or saturated, a very flat coastline can cause water to flow extremely fast during the tide changes. This can cause fish to be caught on the beach very easily.

Something kills the marine life offshore, and tides then bring it in.

Except that, unlike in Hollywood, tornadoes are not selective with the type of creature they scoop off the seas. On top of that, marine creatures tend to have a hard time outside water[citation needed].

You can always count on reality being more bizarre than the fiction you had in mind. Wikipedia has a handy page on animal rains, which is something I could not come up with even in my highest moments.

A recent occurrence was on California in 2017. About a hundred fish fell on a school's roof and playground:

(...) experts say the phenomenon occurs when water spouts from a relatively shallow body of water, carrying small fish in its stream. The wind can then carry that spout of water, sometimes for miles. James noted the school is not too far away from the Oroville Dam, which made news this winter when one of its spillways nearly collapsed because of a deluge of rain water. A fish hatchery is also a half mile away.

The odd sight isn’t unheard of in this area. The Sacramento Bee noted that in 2015, a Folsom couple found several tiny fish dumped on the balcony and roof of their two-story condominium overlooking the American River. A quick Google search shows that people have reported fish falling from the heavens all over the globe.

So if the beach is in the path of tornadoes, raining animals might be a regular occurrence. The cycles of dead animals showing up will coincide with the windier seasons.

You need several different factors converging on a single coast for this to happen.

The first thing is that we need something that kills without discrimination and cannot be evolved away from. So most biological toxins are out. I propose undersea anoxic zones, or maybe volcanic activity.

Then we need something to push the sea life into it, since they won't tend to want to go where they'll die. We need some sort of undertow current that pushes them into it reliably (not an oceanographer, someone else may be able to provide the details for that).

After that, we need the sea life itself. Deep sea environments tend to be rather scarce on the ocean life... if you go to the bottom, you see fish and other life but rarely. So this won't be a deep part of the ocean, perhaps some giant reef system, and equatorial too. It will be within miles of the anoxic zone, but farther from this coast, so that sea life is pushed through to the coast.

Finally, the geology of it needs to cause extreme tides, so that this stuff is lifted onto the beach to some extreme degree.

With the right configuration the beach of death won't just have rotting carcasses strewn about, you might actually see some sort of geysers or bubblers out in the water itself.

Not the answer you're looking for? Browse other questions tagged reality-check ocean ecology or ask your own question.

4
What environmental pressures might cause rodents to evolve social behavior?
6
What types of lifeforms might this cold world have?
19
What might cause (physically) large predatory birds to form large (in terms of numbers) flocks?
18
What measures might an ancient civilization take to protect itself from extreme heat?
16
What could cause the world to be almost completely submerged in water, naturally or man-made?
10
In a single-continent world, what could cause hydrothermal vents?
4
What Sea Creatures Would Make Good Undersea Cavalry?
7
What could cause the sea level to massively decrease?