How do male vampire loses iron?

In my universe the vampire race all had pale skin due to low iron presence in blood and thus they had to constantly keep a certain level by feeding on human, the female vampire can lose a lot of iron especially during periods. What about the male assume no pre-existing condition? I wonder how they can suffer from lack of iron? Let me clarify that the bodily fluid discharge of the vampire is similar to human and their kind tends to avoid high risk activity such as wrestling and racing cars, etc.

Perhaps they never had the iron in the first place. We all assume that vampires drink whole blood because that is what the books and movies depict. But on your world, perhaps the vampires's teeth are capable of filtering their victim's blood such that they take only plasma. This would allow a higher survival rate among vampire bite victims and might explain why their thirst returns so quickly.

Red blood cells live for approximately 120 days. After that, they are broken down in the liver; iron is removed from the hemoglobin and released into the bloodstream, where it travels to the bone marrow and is used in the creation of new hemoglobin for new red blood cells.

If this process broke down so that iron wasn’t recycled properly, then the body would need a supply of new iron to replace what was constantly being lost. 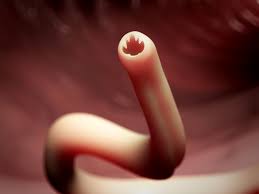 Hookworms are intestinal parasites. They eat blood. They poop it out. Persons with heavy infestations can have iron deficiency anemia because of the chronic blood loss. This used to be a big problem in the days when people went barefoot and pooped outside.

Your vampires are heavily infested with hookworms, living inside them and drinking their blood. It seems just.

They evolved to suffer from the need for increased iron intake BECAUSE they feed on blood.

Most of the iron in the body is hoarded and recycled by the reticuloendothelial system, which breaks down aged red blood cells. In contrast to iron uptake and recycling, there is no physiologic regulatory mechanism for excreting iron. People lose a small but steady amount by gastrointestinal blood loss, sweating and by shedding cells of the skin and the mucosal lining of the gastrointestinal tract. The total amount of loss for healthy people in the developed world amounts to an estimated average of 1 mg a day for men, and 1.5–2 mg a day for women with regular menstrual periods.[citation needed] People with gastrointestinal parasitic infections, more commonly found in developing countries, often lose more. Those who cannot regulate absorption well enough get disorders of iron overload. In these diseases, the toxicity of iron starts overwhelming the body's ability to bind and store it.

I'm one of the unlucky bastards who've had iron overload in their lives.

If on top of a regular human diet you're also going to be drinking human blood, you will have a lot of iron intake and you can have an overload if that's all you eat. In order to avoid such overload, vampires evolved mechanisms to shed more iron than a regular human would. Otherwise they would not live long. Such mechanisms may be the same ones we already have, but more intense: they may sweat more, shed more skin, and have increased GI blood loss.

If they go through some amount of time without drinking blood they'll go anemic. Just like regular humans who decide to become vegan overnight without a dietary plan. Happens more than they'd like to admit.

Not the answer you're looking for? Browse other questions tagged biology fantasy-races vampires blood .

20
How much blood does a vampire need?
1
Viability of a vampire-like creature which emits a pathogen
18
Convenient teeth for a bloodsucking vampire
6
How Can Vampires Obtain Donors?
18
How can a 15-year-old vampire get human blood?
3
How can a vampire produce T cells at home?
4
a chemical component in vampire saliva to assist with feeding