When designing a map of the local universe how should currently unknown/obscured areas be treated?

I am building a map of the local universe for my story and for the time being I will base it on the real universe and our current understandings and observations although later will likely change the names and possibly locations if the story needs it.

The map will span to from local stars and galaxies to galaxy clusters and supercluster within around 1 billion lightyears. The problem with all current maps is the large missing segments due to the "zone of avoidance" and those areas being obscured by our own galaxy.

How should these areas be treated when designing a galaxy/galaxy cluster map? I could take artistic licence and just place galaxies where I need them, if it makes sense them being there or roughly repeating known areas but is there a better way to design these missing areas? are there any predictions for these areas?

Edit: The area I am interested in for the short term is within 10 million light years, it is thought that our local group of galaxies and surrounding groups are in a void surrounded by the rest of the laniakea supercluster and surrounding clusters so i am less worried for the time being of the obscurred areas between them but the areas between the Maffei group and sculptor group is of particular interest as Andromeda is in this direction and between N5128 (centauras A group) and Canes 1 group although this area seems to join the centaurus group to the Virgo cluster. 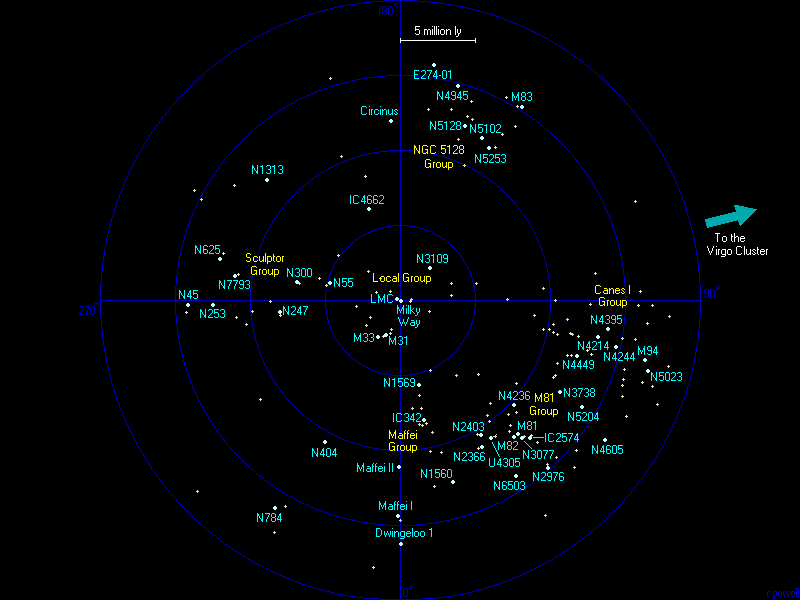 Edit 2: To make the question more specific as galaxy placement is a bit vague, Supermassive black holes are of interest in my story. within 11 ish million lightyears we have 5 smbhs, Milky Way, Andromeda, Centaurus A, M81 and M82.

Split the known universe up into a 2d or 3d grid. And in each grid cell you can store a 2d or 3d image of varying resolution, increasing in resolution as your characters get to know that region of space. Visited grid cells are high resolution maps. Unknowns are blurry low resolution. The furthest reaches are basically single pixel images.

In the beginning of your story, you only have observations from earth. So for a given section of space, you know basically "is there a bright star about here or not"? Basically one booloean value per tile, or one pixel / voxel per tile. You may be able to classify the star, but that's about it.

If you only capture one shot of the night sky for your map you should consider occlusion (you have a 2d image projected onto a sphere only, dont know what's behind the stars, and there are big errors in the estimate of distance). But I'm assuming you're starting with a similar knowledge to modern day humans, so you have a rough 3d map of the nearby area.

As time passes, even without leaving the planet, you can look at a region from multiple positions and angles as our planet moves in space. That allows you to refine a stars position. As this happens in your world replace the tile with a more detailed one. By making multiple observations as earth moves throughout the year we can "peek behind" stars, as well as do some maths to get their relative positions more accurately. That would be reflected by increasing the detail of that grid cell and the grid cells behind it.

That's how we know what's "behind" stars now, and it's how your story could explain increasing the detail of its map over time, even before they get to travel there.

Focusing your telescopes on that tile and you get even more data, you can find the biggest exo planets around the star, you can find dim stars behind it. Etc.

As your characters start to explore, that tile can be looked at from multiple angles, or from closer, and even more data is available. The tile will become more and more detailed.

Eventually, when your story sends a ship there, the highest detailed image appears in that grid cell.

7
How do I calculate the area of a specific place on the map?
28
How could bird people map the air?
11
Mapping the far side of the galaxy
75
What questions should I ask myself when designing a legal system for a fantasy world?
19
Can my spaceship figure out its position using Cepheid Variables?
48
The magical map - how to stop it being too powerful
11
Is it possible to have the age of the universe be unknown?
7
Could I observe the black hole that created my area of space/universe?
2
How many Ultra massive black holes should be added to a map of known black holes?
7
Confused on the way Natural Borders should work with mountains on a fantasy map