How Would a “Lungshark” Breathe Out of Water?

Allow me to introduce to you the epaulette shark: 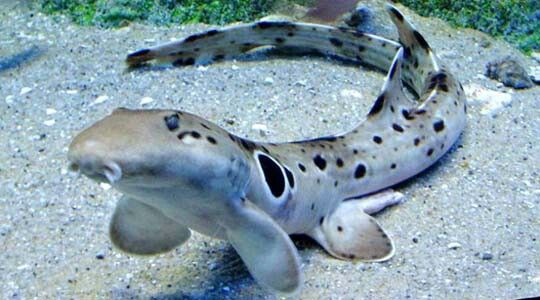 This one species stands out over the other 511 in that it can breathe out of water. How? It actually has several adaptations:

However, there is a problem--this survival strategy has a maximum limit of just one hour.

In an alternate Earth, the Paleocene-Eocene Thermal Maximum still happened 56 million years ago, except that it lasted much longer (say, three to four times longer.) Some waters got so hot and so acidic that some shark species escaped extinction by crawling out onto land, occupying the niches of such bony fish as mudskippers and walking catfish. These "lungsharks" can stay out of water for a maximum of four days.

But air-breathing bony fish have the one thing that makes this possible for them but not for sharks--a swim bladder. Since it's already filled with air, it's easy for some species of fish to modify them into something comparable to a lung. But sharks don't have swim bladders, so they have to find some other method to make air-breathing possible.

Within the constraints of 56 million years of evolution and with no swim bladders, how would lungsharks be able to breathe air within a four-day limit?

Since it's already filled with air, it's easy for some species of fish to modify them into something comparable to a lung

Darwin believed that lungs evolved from gas bladders, but the fact that fish with lungs are the oldest type of bony fish, plus molecular and developmental evidence, points to the reverse – that lungs evolved before swim bladders. Gills were present in the earliest fish, but lungs also evolved pretty early on, potentially from the tissue sac that surrounds the gills. Swim bladders evolved soon after lungs, and are thought to have evolved from lung tissue.

With that clarified: the first vertebrates to walk the land in the real world were amphibians, which are known for breathing through the skin as well as through lungs in order to meet their oxygen budget. Your shark may need to develop some skin breathing as well.

They could also evolve to breath through the anus like some turtles do, as well as dragonfly larvae and sea cucumbers.

They might also evolve dry-running gills. Gills cannot work when dry because:

The density of the water prevents the gills from collapsing and lying on top of each other, which is what happens when a fish is taken out of water.

By keeping them moist with a mucus, the landshark could keep them working on air.

Finally, they may combine the above with a hint from insects and develop more entrances for air in their bodies. They could have gills going all the way from the face to the tail.

Some sharks, most notably the sand tiger shark (Carcharias taurus), gulp air to aid in buoyancy, allowing them to float near motionless in the water column (if you've ever been to an aquarium and seen sandtigers, you've probably noticed this).

Many other fishes can breathe oxygen, but they absorb oxygen through highly vascularized portions of the stomach or the intestines rather than their swim bladders. Examples of this include loaches, trahiras, and several families of catfish. If a shark started swallowing air for buoyancy and then began developing a vascularized section of the stomach or gut for absorbing oxygen from it, then natural selection could turn that into a lung by separating the gas chamber from the rest of the digestive tract. In fact, sharks already have a very large spiral-shaped large intestine with multiple valves that could be repurposed for this job, possibly even combined with a rectal method of taking in oxygen as seen in some turtles or dragonfly larvae.

Indeed, the lungs of sarcopterygian fishes (tetrapods, lungfish) and the swim bladders of other fishes are thought to be derived from a simple outpocketing of the gut in the first place, this is why the respiratory and digestive systems are connected in air-breathing vertebrates.

The air breathing sharks use the spiracle to move air into a body of water held in the mouth and throat.

Shark have gills. The gills are in continuity with the mouth and water streams thru the mouth and out the gills when the sharks are swimming. This is ram ventilation and is used by fast swimming sharks. Those sharks must swim to breathe. Other sharks can hold still and pump water past the gills using their mouths, or if not thru the mouth thru spiracles on the top of their heads.

Some sharks, particularly those that are not active swimmers, such as nurse and bullhead sharks, breathe using buccal pumping. This method gets its name from the buccal (mouth) muscles that actively draw water into the mouth and over the gills, allowing the sharks to respire while remaining still.

These sharks also have prominent spiracles, or respiratory openings behind the eyes that allow the fish to pull in water while buried under sand.

Other sharks use ram ventilation; that is, they ventilate their gills by swimming very fast with their mouths open. Some sharks, such as the tiger shark, can switch between buccal pumping and ram ventilation depending on quickly they're swimming

Benthic Chondricthyes, such as a horn shark, round ray, or shovelnose guitarfish, live on the sea floor, with mouths located on the bottom of their heads to get food from the sand below them. Many of these animals also camouflage and avoid predation or sneak up on prey by burying themselves in the sand. In order to breathe without buccal pumping or ram ventilation, they use specialized holes behind their eyes called spiracles. Spiracles act like a straw or snorkel sticking out of the sand, drawing water over their gills and out the gill slits. This allows these animals to remain motionless and below the sand while still being able to get oxygen. 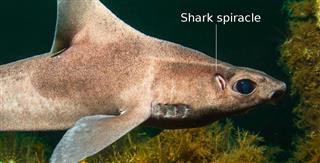 In your air breathing sharks, they capture a big mouthful of water when they leave the water and then keep their mouths shut. These sharks can also close their gill slits from the outside so the water does not leak out of them. They use the spiracle organ to move air into the water held in the mouth, pumping it back and forth and using a variation of the "buccal pump" to swirl the oxygenated water against the gills.

As these fish spend more time out of the water, they modify the salinity of the mouthful of water to match that of blood, and then red blood cells exit the vascular spaces and enter this mouthful of water, improving its oxygen carrying capacity.

The problem with this method: the shark cannot open its mouth while breathing air. No eating.

Not the answer you're looking for? Browse other questions tagged science-based biology evolution alternate-earth adaptability or ask your own question.

10
The Mer--Let's Get Real, Shall We?
13
Mermaid Buoyancy: Oily Livers, Swim Bladders and Lungs
6
How to evolve fully terrestrial sharks, 100 million years in the future?
1
Alternative origins for the lungs
9
How would a cephalopod-like race breathe outside of water?
2
How Would the Multituberculates Survive Longer Than in Our Timeline?
2
Could an Ice Age Extinction Wipe Out All Marsupials?
3
Would a Longer PETM Save the Creodonts and the Mesonychians?
4
Could Sharks Survive a Longer PETM?
2
Would This Chosen List of Animals Occupy the Earthworm Niche?