Could my island, its inhabitants, and its tunnels exist? If so, how? If not, how could I tweak it to make it so?

My island is on Earth. It is my intention that it was a part of a larger landmass at some point during ancient history, so not as early as Pangaea. That’s important because the island’s inhabitants have passed down their origin story to the present day descendants, which tells that they lived on the land before it became an island, that they survived its ‘drift’ to sea, and have remained there ever since.

The island and its inhabitants went undiscovered by civilized society until the early 1900’s, when a wealthy American man stumbled upon it while circumnavigating the globe in his fancy yacht, or something like that... I’m adding this because I figure the fact that it went undiscovered for so long might influence answers regarding how the island drifted in the first place, where it might’ve come from, and where it might’ve gotten to. Also, for the same reasons, I’ll add that the island’s inhabitants are tribal, but because of the size of the island, or possibly just their culture, they live together in one tribe. As for any concerns about population that might pop up, the islanders sacrifice two tribe members 1-2 times a year for religious purposes, so let’s just assume that that takes care of that.

The island is tropical and it has one large river that weaves its way through the island. This river can be connected to the ocean or not; the important aspect of it is that the river was there before the drift, though I’m willing to change that if it’s impossible. The tunnels, on the other hand, need to have survived the drift somehow, because they contain preserved bodies of sacrificial victims dating back to the islanders’ original ancestors. I haven’t even considered composition of the tunnels, so if they have to be carved from some rare type of rock or if the islanders had to build them in some way for them to survive the drift, that’s fine.

So, my question(s) are: Is my island’s existence plausible? How could its inhabitants and their tunnels have survived the drift? Where could it have come from? How could its drift have occurred so that the aspects I’ve presented are possible? Where might it have ended up?

Note: (Just in case any questions arise on why I don’t just handwave this) I intend for a member of the tribe to explain their origin in detail at the beginning of the story. It’s an aspect of their culture that their history is so well preserved; despite the great length of time that they’ve lived on the island, they know what happened and have maintained their culture as near to its beginnings as possible.

In addition, if any of this is impossible without magic, that’s fine; I’ll accept an answer saying just that if it seems to be the best option. There is ‘magic’ of a sort in the story and I could use it to handwave this, I’d just prefer to be able to explain it realistically, so that the islander’s tale of their origins would sound plausible to a modern day person.

I think you need some truly extraordinary evens, which violate science as we know it.

The best option for your story might be not to explain anything and to simply tell a yarn in the tradition of Verne or Wallace. On a related note, think hard if it is a good idea to start with a blob of exposition. Show, don't tell, and preserve mysteries to be revealed.

Your island sure would have to be faster than the natural drift (1 inch per year) .

To go undiscovered, in should be 200 km away from any land if it has a mountain in the middle, or about 50km away if it is just a spot with some palm trees. Still, to stay undiscovered by fishermen, it should rather be 200 km, and in difficult waters.

Could it float first and then attach itself to a reef later?

It could be some floaty rock that was sliding down a volcano slope during an eruption. There were caves inside, with people.

Then it was free floating until it hit a reef, where it stayed. Luckily for the islanders, because the waves were starting to crumble it away. Maybe the islanders took an active part by pulling it and fixing it more?

To make it more flashy yet: Some reefs grow on old, slowly sinking volcanoes. Maybe yours can be convinced by the disturbance to break out a last time, fixing that rock finally and growing that island a bit.

Volcanoes have the additional sympathetic habit to have caves in their flanks, too. So your people would then have some more choice to store their dead in the coming centuries.

That american yacht guy could also find plants and animals on the island which don't belong on island naturally - because they came with the original floating rock.

Your island began life spontaneously as a pumice shelf

The floating island remained landlocked for decades or even centuries until a typhoon dislodged it and set it adrift. But the bottom was dragging along the continental shelf, so instead of just drifting freely, it was inching its way out to sea slowly every time the tides cycled. Eventually, it got hung up on the peak of an underwater volcano. The volcano cap broke free and lava slowly filled up beneath it, making exceptionally hot water and ground, like the sulphur springs in Taiwan. For the past several centuries, the volcano has cooled down and stopped building the island.

Your island is on top of a large ship constructed millennia ago.

Yeah this is a bit of a stretch, but many thousands of years ago, a whole bunch of very smart people built something like this: 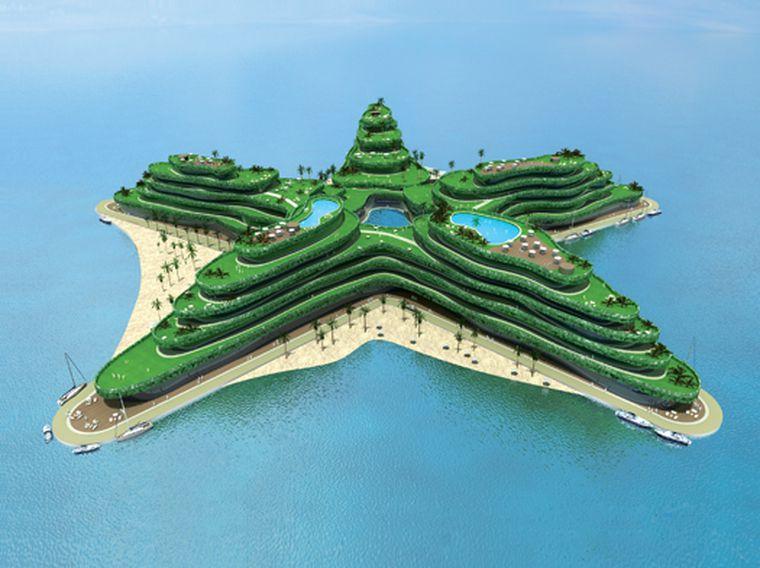 They made it mobile so they could live out on the open seas, free of ... a military threat?.... taxation?.... Maybe they had their own year 2020 of bad events and just noped out of their society.

Anyway they got wiped out in a hurricane, vegetation grew, died, and regrew, dust landed and became new land. To any outside observer, it's a floating island that follows the currents. Some random early humans swam to it when it passed by, got trapped, and 2000 years later their descendants are living on the new land, unaware that it's a ship underneath.

The tunnels are the original hallways of the ship. They've been caked in mud from floods and overgrown and are unrecognisable as artificial unless you start digging sideways into the cave walls.

The river is the original water feature, pumps still running, purifying seawater into fresh drinking water. An island this small isn't going to have a perpetually flowing river from a natural spring, this would explain how it happens.

Honestly I don't see why not, there is a planet that rains molten and solid glass horizontal at what would be LEO velocity.

Not the answer you're looking for? Browse other questions tagged reality-check earth history or ask your own question.

10
How will people and cultures behave if they can have no certainty about their origins and history?
6
High-Altitude Life?
6
Magic Ship Armor Causing Fog
7
Can I have a beach of pearls?
3
Is it possible to build weapons that shield the RF frequencies pre-cogs use to send their memories back in time?
6
What star can give an earth-like planet a 1-day year?
4
Can secrets/information be a feasible currency in a fantasy setting?
5
Can a city develop without exterior trading?