Would a torsion balance be able to determine the poles of a planet which has no magnetic field?

My explorers will be using a torsion balance to weigh their new planet. Is there a way to also use a torsion beam to determine the direction to the poles of a rotating planet?

My assumption is that it could because the two attracting weights have three forces acting on them, and when the beam is aligned latitudinally, the force vector from centrifugal acceleration is working in opposite angles on the two weights relative to the beam center, except at the equator and the poles. The beam aligned longitudinally will always have exactly the same centrifugal force vector on them, except at the poles where they would be opposite. And if the weights are aligned vertically, they have different angular velocities. It would seem that in some arrangement or combination, the difference between the centrifugal force vector could be used to indicate the planet's axis of rotation and thereby point to the poles. 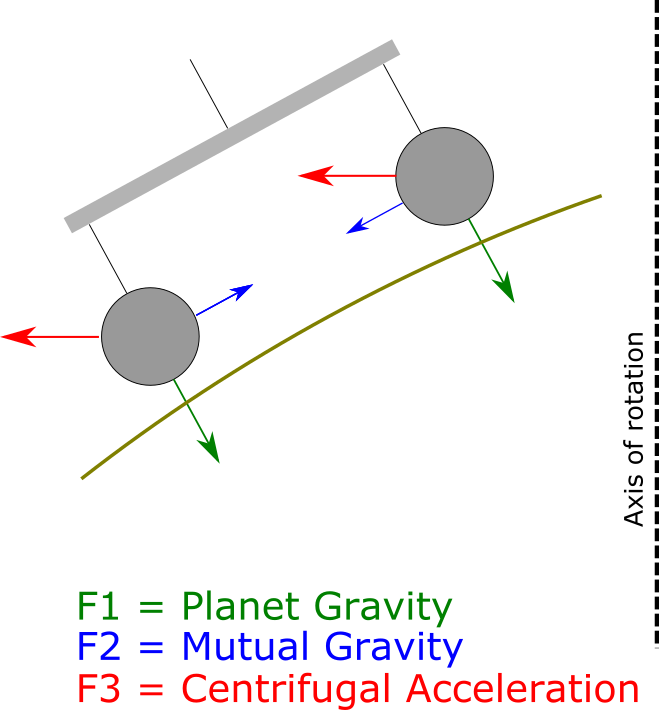 I am not interested in alternatives to a torsion balance. Please let me know if there is some test or series of tests which can be done with a torsion balance that would indicate the direction to the poles of a rotating planet.

No. A torsion balance is entirely the wrong tool for that purpose.

A simple stick in the ground will suffice. Or, if for some reason tracking shadows isn't your thing, a gyrocompass will do it.

Incidentally, even if a planet has a magnetic field, there is no guarantee that a magnetic compass will point reasonably close to the rotational poles like they do on Earth.

Not the answer you're looking for? Browse other questions tagged planets hard-science navigation .