Magic and medicine: The perils of treating dragons

In my story's world, dragons have been living alongside humans for some time now. Of course, there are hospitals and other medical facilities variable to them. Now, as some of the staff of said facilities are humans, how can they protect themselves from aggressive/panicking/delirious patients? An upset child who is terrified of that needle you're holding is bad enough, but when a (dragon) child is extraordinarily strong and can breathe fire, ice, acid, or poison gas, how do you cope? What can human medical staff handle draconic patients?

I've already figured that staff would probably have various methods of restraint on hand: sedatives, physical restraints, with help from parents and bribery with treats for young ones. Do you have any other ideas for protective gear or magic?

EDIT: It's been brought to my attention that I forgot the time period. This story is set in the BattleTech universe, circa 3135 on an original world that has well-studied and functional high fantasy style magic in addition to all the tech.

EDIT 2: Dragon sizes. An adult dragon weighs an average of 10 tons and is 55-60 feet long from nose to tail tip laid out. Wingspan of around 70 feet.

A wyrmling weighs about 40 pounds, is 8 feet long from nose to tail tip, and has a wingspan of 20 feet.

Juvenile and young adult examples would be in between the two.

As a health care worker, I hate to say it, but nurses and doctors suffer a lot of workplace violence from abusive patients, family members, and even associates determined to do violence.Intelligent species aren't going to tolerate being sedated all the time. If humans were being treated by pixies, do you think the human would be okay with it?

Since we're talking battletech-level science, why not med suits like in Starcraft? It incorporates environmental protection from toxins, diseases, and plain old physical abuse. You could have a species-specific set of medications built in as a pod, depending on who/what you were treating. A giant can crush you, but an ammonia breather is toxic to work around, a venomous lizard can poison you, and you never know when someone's newborn is also a face sucker from ALIEN. The Ytterbian plague is going around, and armored PPE is just the thing to keep it out. Hose it down at the end of the shift with sulfuric acid and hard radiation.

All this assumes you don't want to skip a biological doctor and just use robots. The "human" touch is important in medicine. 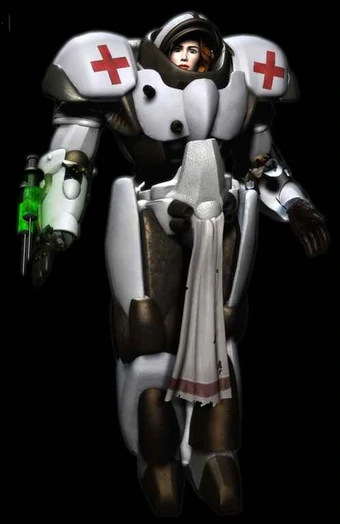 In the real world veterinary doctors treat horses, cows, gorillas, elephants, orcas and other such large animals. Some of those patients can kill people and/or deal a lot of damage to property with ease.

Check how these animals are treated and you'll have the info you seek. Elephants and orcas specially are very smart and can be very moody.

Sedation is mandatory in cases of raging or delirious patients. For lucid yet aggressive patients, you need to gain their thrust. It's just like handling large male human adults in a psychiatric ward, really. The only difference is the amount of danger you're in for in this line of work.

Not entirely sure what battletech means, but from your comment it seems like they're pretty advanced. Just off the top of my head, I'd recommend sedation, but that's a lot of drugs.

So I came up with this stupid idea- immersive VR. we already can make VR look pretty real, and I'm sure you could handwave in this tech that makes the dragon think he's not there until you finish setting the leg/stitching the wing/whatever. not entirely sure what this system would look like, but maybe it's helpful.

A secondary option, if you're tech is advanced enough, is to do a very localized drug that shuts down the pain receptors of the brain while you're operating or whatever. if you can do this, you might also consider just turning off motor controls as well so it won't try and swat the doctors away.

final stupid option- sometimes, all they need is a good distraction, so maybe set up a tv playing despicable me or something for the patient. not a failproof method, but it would probably help some.

Not the answer you're looking for? Browse other questions tagged magic humans dragons medicine interspecies-relations .