What advantages or disadvantages would a bipedal humanoid have if their neck connected at the back of their skull rather than the bottom?

While designing my species of trolls I came to the question of how there heads attach to their bodies.

What I've had in mind was that their necks were horizontal rather than vertical so that their heads stick out from their chest (or an area of torso above their chest) instead of sitting on top of their torso. My first thought was that this would be ok because it's how gorilla's necks attach, but gorillas largely walk on all fours and my trolls will stand upright like a human (though they would have slightly longer arms they wouldn't be as long as gorillas).

So what I have in mind is something like the cave troll from the Lord of the Rings movies or perhaps a saurus warrior from Warhammer (head position only, probably a shorter neck) or similar.

The first obvious disadvantage I can see is range of movement in regards to visibility. My trolls presumably can't look over their shoulders to see what's behind them. What else would they not be able to do?

And are there any positives to such a neck position?

One of the main issues of a head connected to the back of the skull is that the part of the neck doing most of work to keep it from pending to the ground is the muscles rather than the bones. Because of this arrangement, the skull has a smaller max weight limit than if it relied more on the bones to sustain it (position yourself in a horizontal position leaving your head and neck unassisted, you'll notice how after a while your neck might begin to feel tired if you try to keep your head stable rather than giving in to gravity.

For that reason, one main issue with this arrangement is that it limits how large the head can get and thus it limits how large the brain can grow. We can see this problem regarding growth in how many prehistoric animals reach a point in which the head begins to look smaller in proportion to the body (the largest mammal, indricotherium, for example had a skull smaller than the modern African elephant in proportion to body size). This means that, unless your trolls also have strategies to make their heads lighter (less bone, the presence of holes in the skull, regions with pneumatic bones like seen in certain birds with enormous beaks) the size it can grow to in relation to the body might be limited. 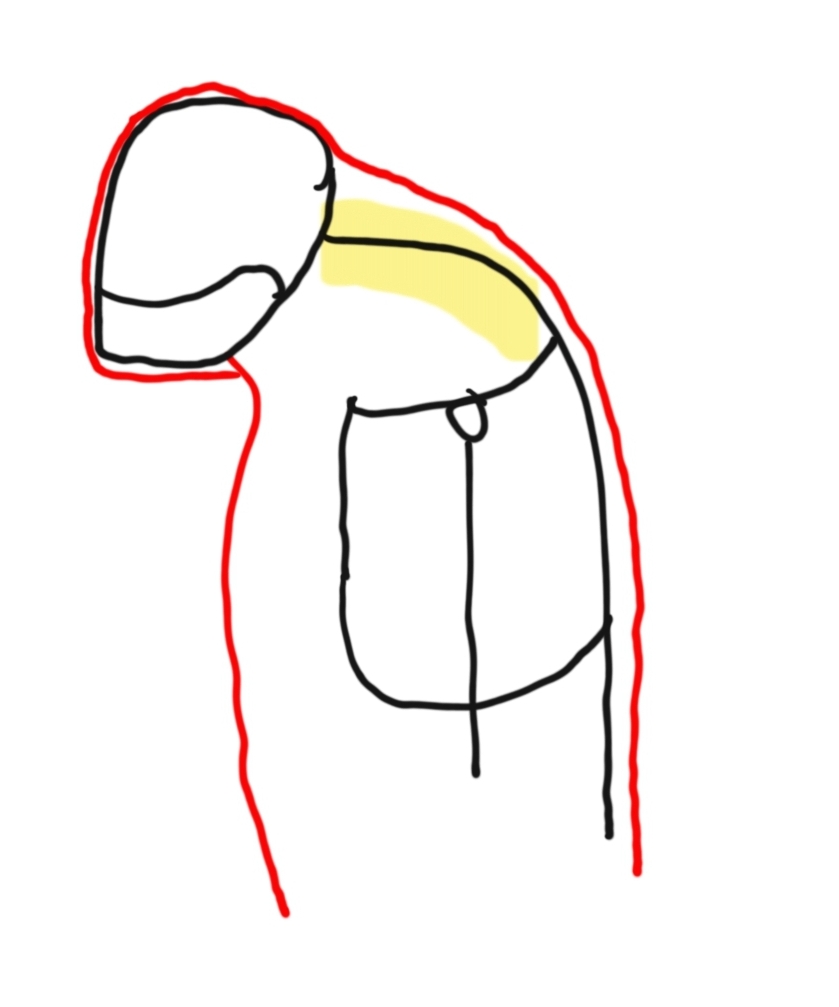 In this rough sketch, we can see how the neck region of the skeleton (drawn in black, highlighted in yellow) needs to be pretty long for the head to located in such a way. A potential advantage of such an arrangement is that harming this being's throat or windpipe will probably be a harder job, depending on how it's positioned, and snapping it's neck will most likely be very hard. As a counter, the top region of the body where the neck lies might be at a higher risk of damage, making it a vulnerable region to weapons such as blades, with a well placed stab with a short sword between the vertebrae by someone who managed to climb these creatures risking severe wounds to the spinal cord and potentially resulting in the troll's death (a heavy Boulder falling in this region might also risk severely damaging the neck and killing the troll as well ).

In addition, since this arrangement seems to limit head articulation as a whole, it wouldn't be surprising if these trolls also had a hard time looking up and even down, which could be highly detrimental with such a potential weak point lying exactly on their large blind spot at the top of their bodies (and also why I'd assume they'd likely be selected to grow larger, since the taller they get, the higher from the ground this weakness will be and the harder to reach it will be for enemies, with the larger trolls with thicker and tougher "neck" regions likely being selected by the environment due to have their weak point more well protected).

Not the answer you're looking for? Browse other questions tagged reality-check creature-design anatomy or ask your own question.

12
Would it be possible for a large inland area to have a groundwater system with cenotes, rather than rivers?
2
What turn of events would justify humans not to have a head, but instead have their face in their chest?
10
What impact would copper-based blood (haemocyanin) have on a humanoid creature?
5
Would it be viable to have a pre-wired brain rather than one that is soft-wired or hard-wired?
7
Would it be possible for a humanoid organism to have bones made of a crystal like quartz or diamond rather than apatite?
5
What alterations without drastically altering their humanoid shape nor horns, can I make to my species that lower the risk of neck snapping?
5
If mammals with paws were to evolve to have human hands or fingers what would their paws/pads look like if they still retain it?
6
What is the bio-mechanical plausibility of humanoid vampyres exracting blood by biting into a person's neck?
5
Anatomical Review: Would the way I designed this semi arboreal Imp be biologically feasible?