This question is connected to another one I asked about Interstellar Transport Vehicles, but more concerned about what we could expect from a Binary Planet System.

So I want to talk about a few major points.

1. General Data about the system

2. How the worlds look

3. Life (Some Orbit stuff too)

My goal is to make this system as realistic as possible. As my last question got a lot of really great answers (way better then Reddit), I hope this one will help as much.

The Fictional Star system is around 7 Lightyears away from earth. The Star is similar to ours but a few 100 Million years older. The Binary system itself is the 4th Planet in the System. We got The Hela & Vesna system. Hela is smaller then Earth with a Radius of 5636,492km and a Surface gravity of 8,7m/s². Vesna is bigger than Earth with a Radius of 7457km and a gravity of 11.5m/s². The surface to surface distance of the 2 Planets is 40536.252km. This creates a rotation period of 14.9hr. Now some nice Renders to show how it looks rn: 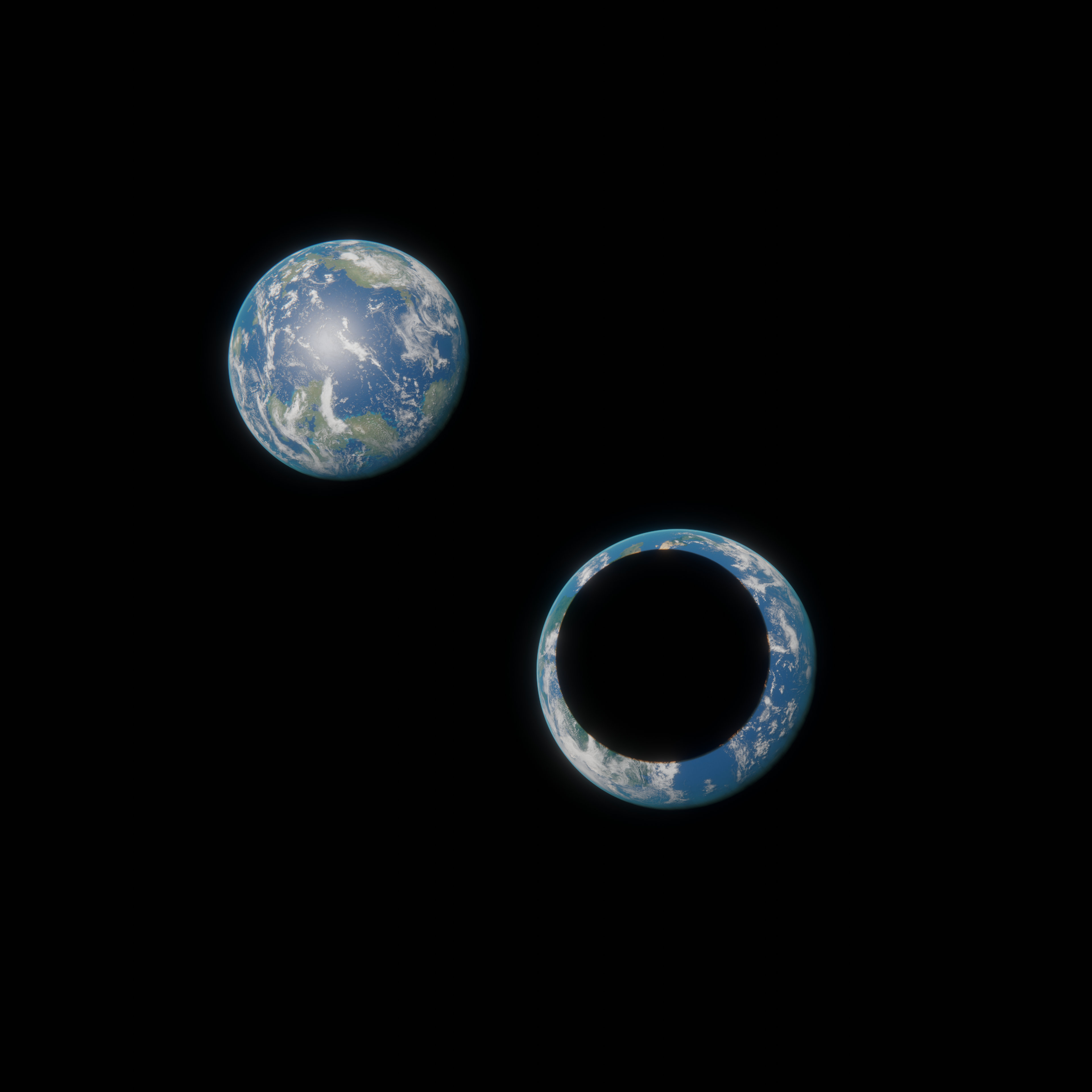 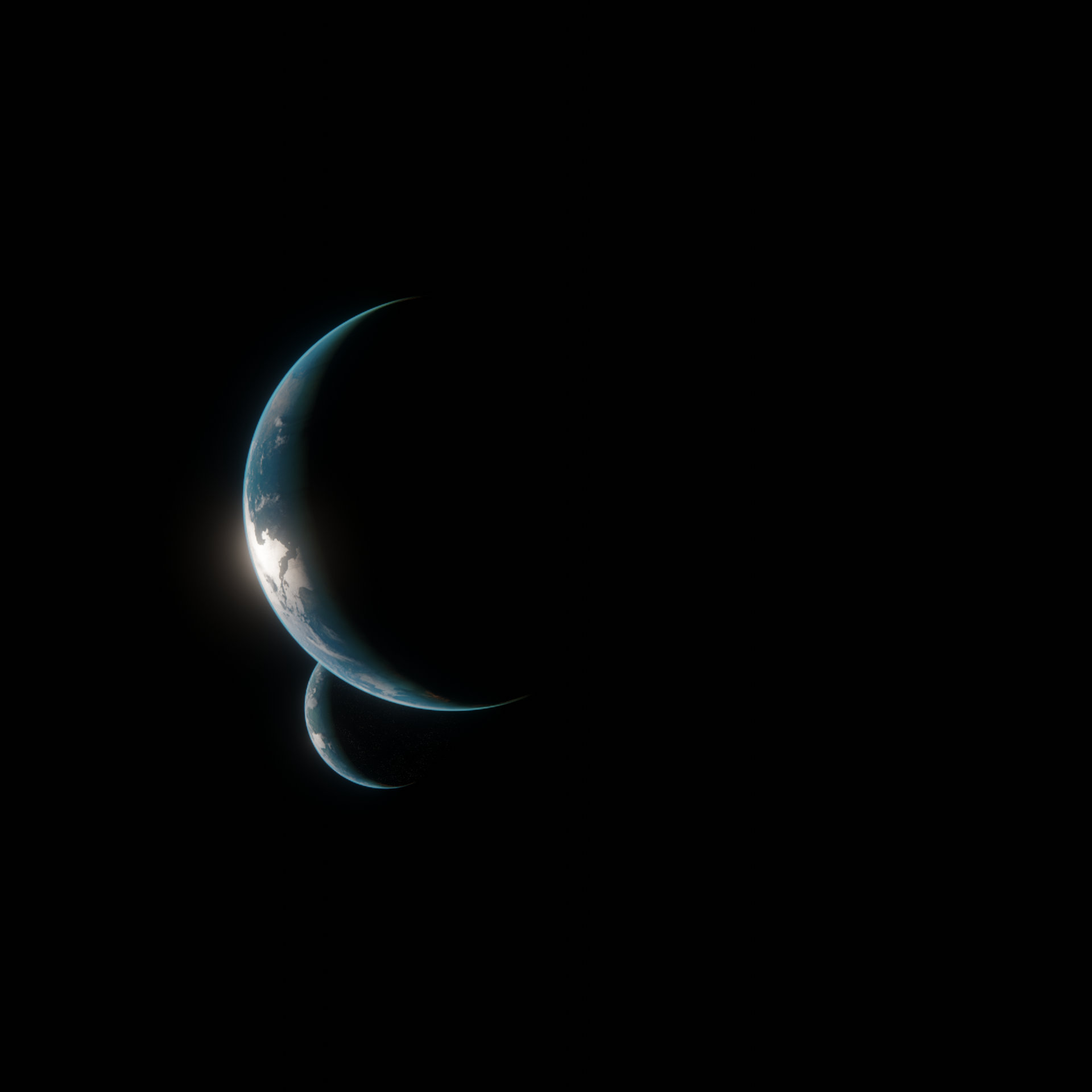 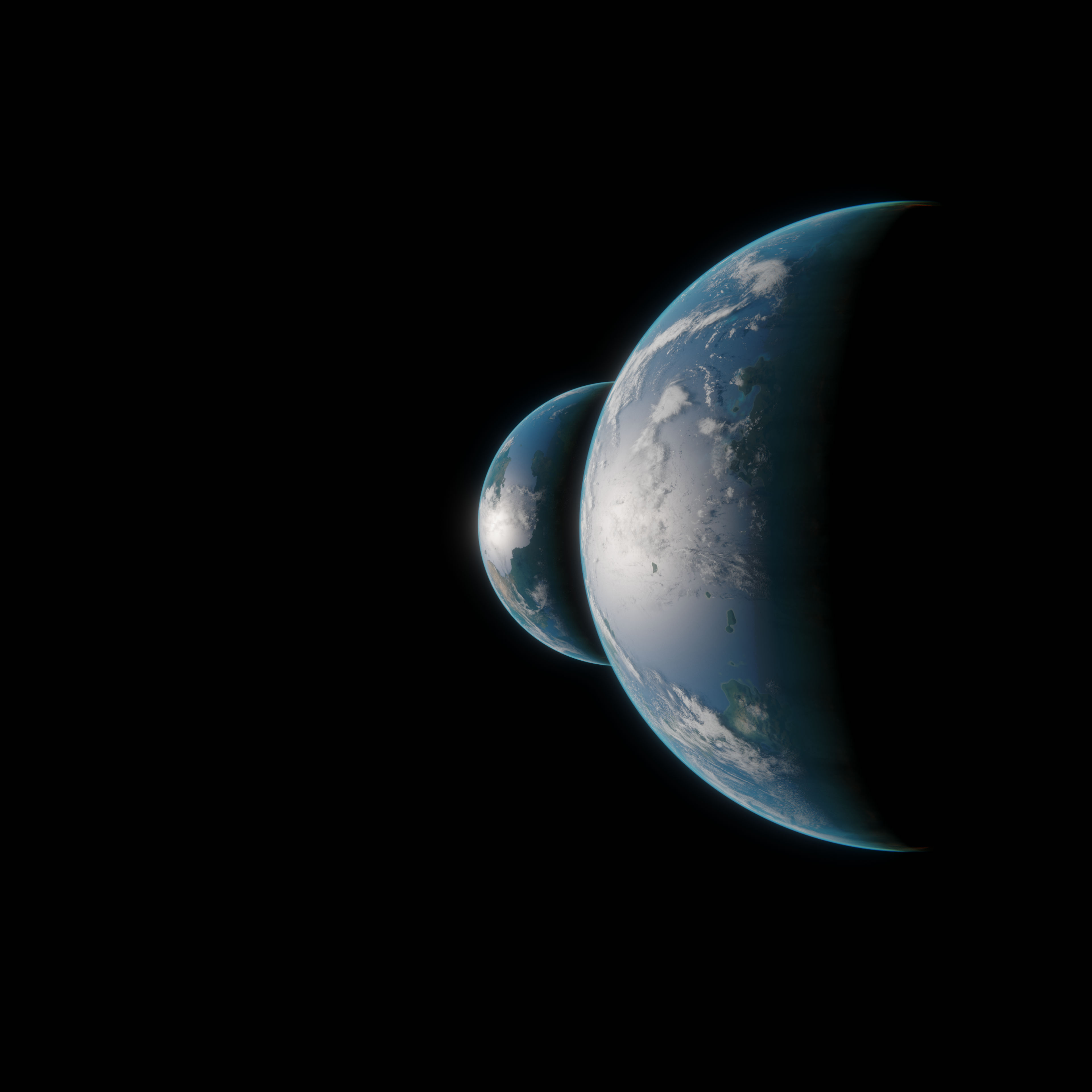 As you can see from the Renders, both Planets look like Earth more or less. The idea is from what i have read so far that most Atmospheres with Oxygen would be blueish as for example a Purple Atmosphere would most likely not have a lot of Oxygen in it, but other Gases. This is kind of a Problem because as it turns out, you need Oxygen for Turbines and such. So my question here would be, how could an atmosphere look like that?

Another big point of course is the topology / terrain. Both Planets more or less look the same. But i am not sure how realistic that is. For such a binary system to form, a Proto Planet would have had to slam into Vesna. Meaning Hela is not like or Moon, aka the same as Earth. It's a different Planet that got captured. So one might expect one to look quite different then the other. But idk.

When it comes to the Orbit, 40000km is really close, and after the initial capture, the tides would have been enormous. But after a while, the 2 would be locked to each other meaning almost no tides.

Now the biggest point is how the Planets look to each other in the Sky from the Ground Level. Well, I think Pictures are worth more then any text I could write about that. 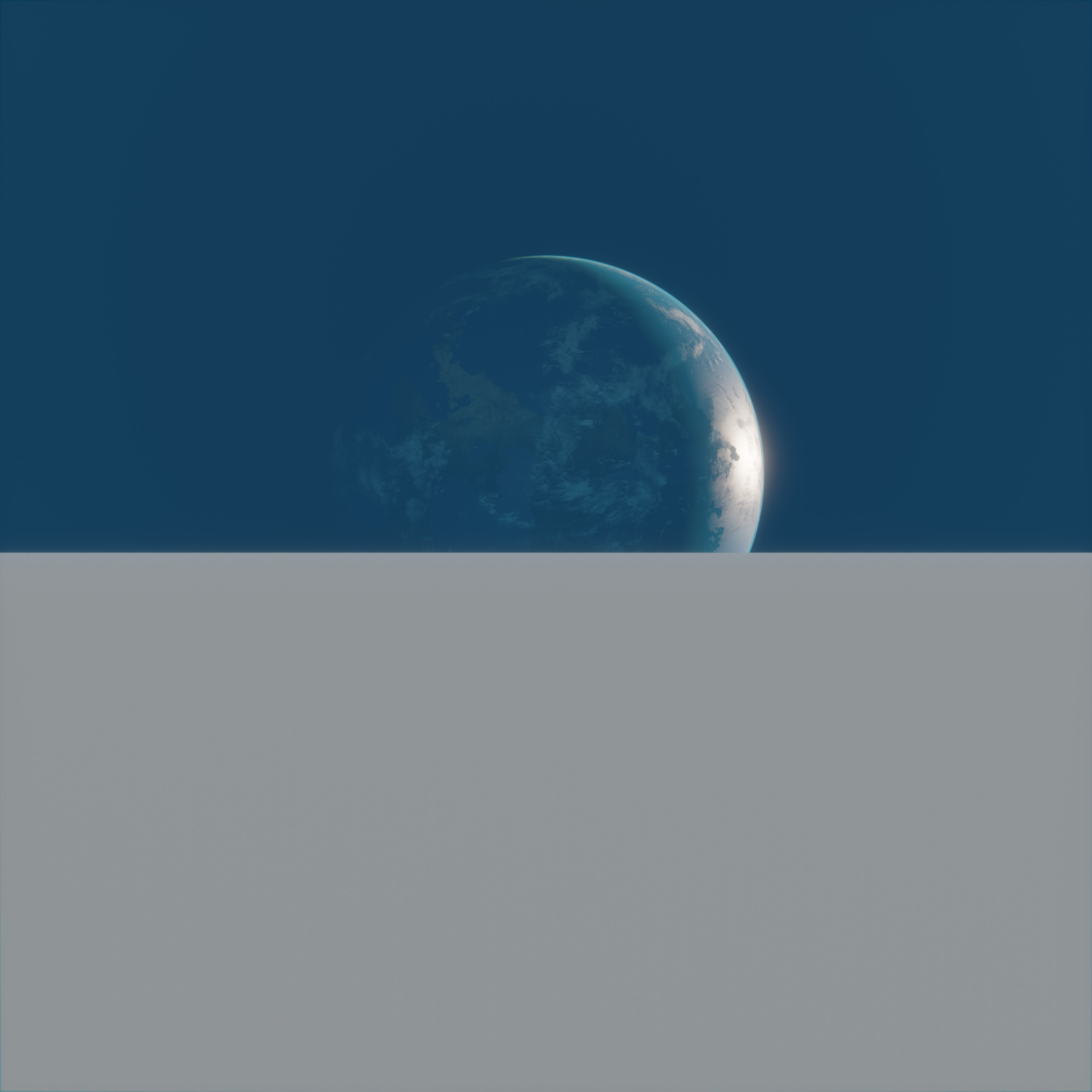 The View from Hela to Vesna, day. 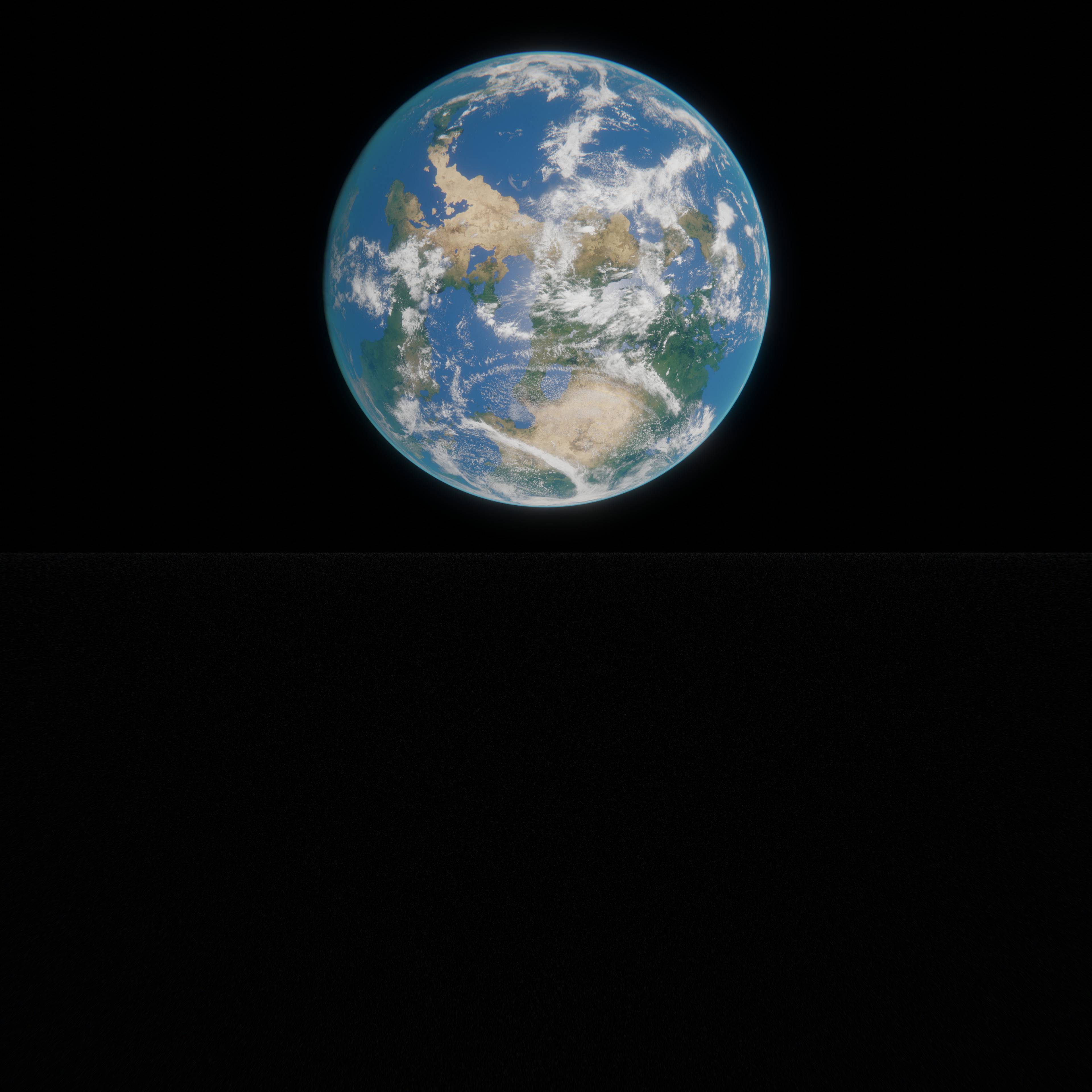 Hela -> Vesna Night. To say the least, it's huge

It stands to reason that both Planets would spark life as soon as one does. But the evolution would be different for sure. It all starts with the Gravity. In General, I think it is safe to say that Hela has bigger life forms, maybe a lot more Flying ones. Where as Vesna has smaller ones, maybe more in the Ocean ?

But we can not forget how the Planets move if we think about life. In General, Vesna eclipses Hela fully once a day and Hela Vesna partially once a day. This could have effects on the life. And since both planets are locked to each other, one could see a drastic difference between the side of the Planets that face each other and the ones that don't. But tbh, i have no idea how that would effect life. Another thing to consider is the Build up of Storms and crazy weather. The eclipse cools a big part of the Planet down, so maybe life also adapts to some un-earth-like storms that happen each day ?

So, this is it for my current ideas. In a TLDR

How could atmospheres look (They don't need to have Oxygen but it would be nice xD) ?

Would both Planets look the "same" considering how the came together ?

How would having a giant bright Planet in the sky effect life ?

How could life look on the Planets ?

For those who want to know, this and my other question are both for a CG short film. I want to create it for my Portfolio but i always think having it realistic is something good.

Thank you very much for reading !

The distance is close to Roche limit 2.4*diameter, about 18000 kilometers between centers of planets. Below the limit the tidal forces would cause them to catastrophically exchange mass.

Even distance of 40k km without above problem, the tidal forces are considerable and cause slight but visible bulging of planets towards each other. Their magnetic fields influence/connect with each other and thus support exchange of tiny charged particles including bacterial spores and viruses, even if the planetary atmospheres aren't directly connected. So since both planets are terrestrial, if one has life, then it will quickly seed the other. Only multicellular lifeforms that can't cross the barrier evolve differently.

The weather and atmospheric circulation would be more unstable that on Earth, not only due to eclipses, but also faster rotation causes stronger Coriolis forces.

Beyond that I don't see some substantial differences from a single planet or limitations, the double planet could be pretty much anything you like.

Not the answer you're looking for? Browse other questions tagged reality-check planets flora life .

15
Orbiting one star in a binary system: what are the effects of the second star on the planet?
7
About how many planets are plausible for this binary-star system?
22
Reality Check: Habitable moon around earth-like planet
20
At what minimal technological level would the inhabitants of a binary planet system need to be to communicate with each other effectively?
6
Please help me calculate acceptable planet sizes & eclipse shadows cast by my binary planet system
8
Can early astronomers determine the gravity of their planet's "moon" without ever going there?
5
Could a binary planet system have a shared magnetic field?
3
How would the reflection of sunlight change the day / night cycle of a binary planet system?