What kind of wing is best for a winged cat

I need to know if this is possible, and if so, what kind of wing to use. I've thought of placing the wings on or behind the shoulders, and having hollow bones. The cat itself is no bigger then a pet cat because of weight. The cat is a hunter who needs to move fast. Songbirds and squirrels are prime targets, usually nothing bigger. I'm afraid to use insect wings since they could break in a fall. The cat also has flukes on it's tail for possible steering.

From what I can see, there's a lot to unpack on what you're asking for. "best" is subjective depending on the climate and environment. Heat and dry weather would require a certain wing type over jungle wing-types.

A mammal with wings isn't common. Glider species, bats and flying squirrels are something to draw from for a more realistic approach. They do not have fluffy bird-wings but skin based wings, excellent for mammals. The wings would be hairless to prevent any air-drag from them.

This approach means changing your cat's way of mobility and physique; they cannot be ground to all-fours as our cats would be constantly. They's need to have the flexibility of their limbs as a Monkey would to allow vivid movements of wings.

If their wings are part of their front limbs, the configuration of their physique would start on how they'd take off; this means the wings need speed to work with; so this is more suited for a glide-type of flight; start of high and swoop in and out.

If the wings are an added limb, then you'd need to find a suitable place where it won't hinder the front or the back limbs. You're most likely looking at bat-like wings for the extra strength of support and to have more lift.

Putting the wings on the back would be difficult to manoeuvre normally, or at least how you'd expect a cat to move with by comparison to real-life cats; the wings themselves would need to be part of the bone structures and so the cat's size and shape would have to reflect on the space needed.

If it's on the sides, then the cat would need a supportive bone structure to house 'limb' that far down the spine. Strong enough to support the cat's weight and the wings have to be large enough for the weight but also able to be tucked away from the cat's other limbs, which could mean it could wrap around itself, huddle over it's back or perhaps tuck into fuzzy skin-pockets

Or, you could perhaps make this into a more hybrid-like species. Based off a cat but could have lemur-like attributes ( think of Avatar; Last Airbender's Flying Lemour; Momo) Physical body of a lemur but the head and tail of a cat.

Consider the possibility of a cat possessing the wings of a modern multi-role combat jet aircraft, such as the F/A-18 Hornet (shown here) in use by many nations.

A feline with the wings of a fighter aircraft has the distinct benefit of allowing for a wide range of armaments to be carried and used against its prey and any predators that might threaten it. For instance, pesky neighborhood dogs might be dispatched with a Hydra 70 air-to-ground rocket, while a mouse might be obtained for dinner by dropping a Joint Direct Attack Munition (JDAM) on its burrow, or a bird breakfast acquired with a shot of an AIM-9 Sidewider air-to-air missile.

If space is an issue (after all, who wants a cat with an extraordinarily wide wingspan wreaking havoc inside your home), you should consider choosing a folding wing configuration typical of naval aircraft for compact storage aboard aircraft carriers. 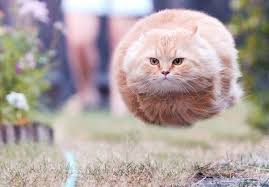 If you're going with magic/handwavium, take inspiration from birds that prey on songbirds/squirrels. If it's going to be hunting in the woods, consider wings like an Accipiter hawk, for open areas a Buteo hawk, if it's a stealth hunter maybe owl-like wings.

If you want plausible biology, you'll be in a bit more of a pickle, not least because you need to add two limbs, which just doesn't work for a vertebrate. You would need to either sacrifice a pair of legs or go with a sugar-glider-like flap, which would allow gliding, but not powered flight. In the former case, you could look at bat wings for inspiration, but you'd probably basically end up with a predatory bat by the time you were done evolving it to work.

Songbirds and squirrels are prime targets, usually nothing bigger.

When it comes to those animals, the three kinds of flyng predators that come to mind are:

Hawk wings would also be fast and agile, but not as much as falcon wings, and would not be a compromise between speed and stealth, so the choice really boils down to owl or falcon. Since you also mentioned speed in the question, I think falcon wings are what you are looking for.

Not the answer you're looking for? Browse other questions tagged reality-check biology magic creature-design fauna or ask your own question.

28
Would it be possible to mount a working minigun onto the saddle of a tyrannosaurid dinosaur?

6
Wing surface area for large flying creatures
58
Why is this creature afraid of water but not of body or plant fluids?
1
The Reindeer--Let's Get Real, Shall We?
10
What kind of animals are my trolls?
7
Metal-Feathered Macaw Viability Part 2: Best Wing Shape?
4
Is this humanoid dragon realistic the way I’ve imagined it?
2
Reasonably tougher humans against falls, concussions etc
7
What Is The Best Wing Design For A Giant Flying Animal
3
Increased flexibility for dragons?