The practical way to desalinate water on an agricultural scale – that part is critical – is by reverse osmosis. https://en.wikipedia.org/wiki/Reverse_osmosis#History says:

Researchers from both University of California at Los Angeles and the University of Florida successfully produced fresh water from seawater in the mid-1950s, but the flux was too low to be commercially viable[4] until the discovery at University of California at Los Angeles by Sidney Loeb and Srinivasa Sourirajan[5] at the National Research Council of Canada, Ottawa, of techniques for making asymmetric membranes characterized by an effectively thin "skin" layer supported atop a highly porous and much thicker substrate region of the membrane... In 1977 Cape Coral, Florida became the first municipality in the United States to use the RO process on a large scale with an initial operating capacity of 11.35 million liters (3 million US gal) per day.

So basically desalination on an agricultural scale started happening in our world in the late 1970s. But how much earlier could it happen? (Again, I'm talking a realistic setting otherwise similar to our own world, no magic or handwavium.)

Clearly, it needs to be after the Industrial Revolution; even if we imagine a medieval alchemist somehow stumbling on relevant techniques in the lab, you need industrial mass production to make it relevant to agriculture, which measures water in acre-feet.

But the above description sounds like a serendipitous discovery, or a large enough R&D budget, might have produced the relevant techniques in 1950.

What about 1925? 1900? 1875? There are lots of things that turn out to have been invented about as early as they could, because of the need for things like high precision manufacturing technology (bicycles, jet engines, computers). And there are other things that it seems really could've been invented earlier had anyone thought of them (stirrups, efficient plows, paper, Chinese wheelbarrows). Which category does reverse osmosis desalination fall into? What are the prerequisite technologies that would need to be in place before it becomes feasible?

You say "The practical way to desalinate water on an agricultural scale – that part is critical – is by reverse osmosis." That may be the practical way at the present, but is it the only possible way that would be practical in any situation?

Any society which has sufficient, and cheap enough, energy available can use that energy to turn salt water into water vapor which can be condensed into fresher water, and the process can be repeated several times if necessary to make the water fresh enough.

The manufacture of salt is one of the oldest chemical industries.[81] A major source of salt is seawater, which has a salinity of approximately 3.5%. This means that there are about 35 grams (1.2 oz) of dissolved salts, predominantly sodium (Na+ ) and chloride (Cl− ) ions, per kilogram (2.2 lbs) of water.[82] The world's oceans are a virtually inexhaustible source of salt, and this abundance of supply means that reserves have not been calculated.[76] The evaporation of seawater is the production method of choice in marine countries with high evaporation and low precipitation rates. Salt evaporation ponds are filled from the ocean and salt crystals can be harvested as the water dries up. Sometimes these ponds have vivid colours, as some species of algae and other micro-organisms thrive in conditions of high salinity.[83]

So they open the gates and flood the salt evaporation ponds when the tide is high, and close the gates after the ponds fill up, and wait for the sun to evaporate the seawater, leaving salt behind in the ponds.

Suppose that a salt evaporation pond had a greenhouse type structure built above it, to help heat up the air inside above the pond to hasten evaporation, and to contain the evaporated water vapor. there could be a sort of a chimney leading from the greenhouse to a horizontal pipe or duct to carry away the water vapor. There could be many transparent panels in the horizontal pipe or duct to let in sunlight to help keep the water vapor hot.

Thus the salt water could be evaporated and condensed several times until it was sufficiently pure, and transported inland to be used fr or irrigation.

So I would suggest that some sort of watertight floor would be laid down, and several feet of soil laid on top of hit, and crops planted in those beds, and greenhosues built above those beds, to contain and reuse water and reduce the need for more water as much as possible.

And it seems to me that in a 19th century mining town in a desert near the sea where food and water had to be imported a long distance at a large cost someone might have thought of and created such a project to provide water and food for the mining town in an alternate universe.

All you need is a suitable membrane; you don't have to make it yourself. Suppose there is an animal which has such a membrane in its gut -- it uses it to desalinate water. Farm enough of these creatures, harvest their intestines, and you can create your own agricultural-scale desalination plant.

You just have to treat those membranes well and keep farming the saltwater sheep or whatever they are.

Salt water when it turns into vapour becomes sweet, and the vapour does not form salt water when it condenses again. This I know by experiment. The same thing is true in every case of the kind: wine and all fluids that evaporate and condense back into a liquid state become water. They all are water modified by a certain admixture, the nature of which determines their flavour. But this subject must be considered on another more suitable occasion.

The applications of distillation to make alcohol would not be developed for some time, but Aristotle recognized you could produce sweet water from various water containing substances by boiling it. Distillation requires energy.

If you had ample geothermal energy this would be doable. Or lots of coal or oil to burn. You could make a solar concentrator; perhaps Archimedes' Death Ray apparatus could be put to use.

To fill a canal with water produced by distillation would require a lot of energy. But canals are wasteful if water is preciousl If I were farming using distilled water I would take care to conserve water and keep it from evaporating away or travelling into the ground. If it were 300BC I would grow my plants in discarded wine and oil pottery amphorae. There were many of these in the ancient world, and broken ones would work well too - fill with soil, bury and grow your plants inside, watering by hand.

All you need is a few plastic bottles, a straw, some glue and some string. 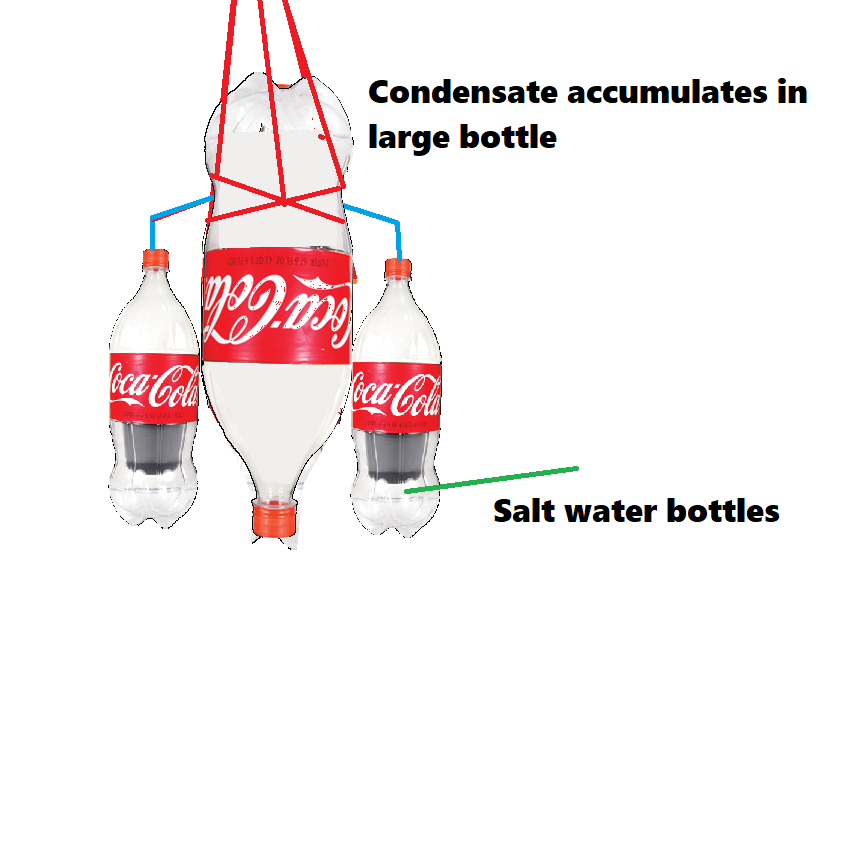 Not the answer you're looking for? Browse other questions tagged science-based alternate-history technological-development chemistry .