How would one get a small moon spinning?

I'm considering writing a story taking place in a base on Saturn's closest moon, Pan. The premise for the base is that they got Earth-normal gravity by setting the moon spinning, causing anything on the surface to fly outward due to centrifugal force (or centripetal, whatever you'd like to call it). I've calculated that it should need to make a full rotation once every four minutes (1.5 degrees per second) to have Earth-normal gravity.

However, I have a few technical questions about this that I would be grateful for answers to.

Thanks y'all! Any help is appreciated.

Reality check: This will tear the moon apart.

You have a big problem - if your moon is rotating so fast that centrifugal force overcomes gravity, there is no net force holding your moon together. When spinning so fast, all objects on the surface of the moon at the equator feel a net upward pull of 1g, and that includes the surface itself.

A moon/planet is basically a big pile of gravel that's held together only by its own gravity. If the centrifugal force is so strong that it overcomes natural gravity and reverses its direction, parts of the moon are going to get flung off as well. If a person on the moon's surface falls up, so does the patch of ground he's standing on!

Objects that produce artificial gravity by spinning must be held together very strongly, or else the spinning will tear the object itself apart. The intermolecular forces of a metal space station bind the hull together tightly enough that it won't fall apart under 1g of stress. But when you have a moon that's only held together by gravity, it cannot withstand any more force than the gravity of the moon itself provides. If the body is held together by more than just gravity (if it's a single fused rock, for example), the body will be more resistant to disintigration, but that typically won't apply for large celestial objects.

To make this work, you'll have to cover most of the moon with a strong shell that will catch upward-flying moon chunks. The apparent gravity will vary from 1 Earth-g upward at the equator to 1 Pan-g downward at the poles, so everywhere that has a net upward force will require a backstop, or else that chunk of moon will just fly off into space. But if you can build something of that scale, you don't need the moon inside in the first place. In fact, you'd be better off without it, since you don't have the moon gravity working against your centrifugal force, and you can also make a cylindrical shell with constant gravity (an O'Neill cylinder) rather than a spherical shell with gravity that varies by latitude.

TL;DR: If you spin a moon fast enough to make apparent gravity go "up", you will destroy the moon.

See also: How fast would a planet have to be spinning for the centrifugal/centripetal force to cancel out the force of gravity near the equator?

How to get it spinning: Ice Jets

The innermost moons of Saturn are composed of a rocky interior surrounded by an ice shell (probably). There's a fair chance that Pan is composed of just too much ice to properly use but we'll ignore that. It also looks like a ravioli, but that actually works to out benefit, somewhat. Anyway, in order to get it spinning, the easiest thing to do is to have some form of surface propulsion, and luckily the fuel needed to cause the propulsion is right there on the surface - the ice shell.

Essentially, what you want to do is take a pair of heat rays - that is, devices with can shoot a beam of heated particles - and place them on either side of the planet's bulging equatorial ridge and fire at opposites ends. Something like this: 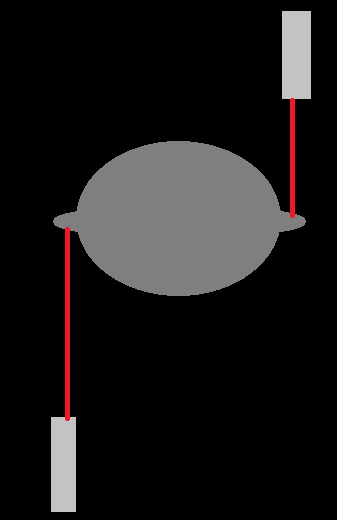 The large gray thing is the planet (yes, it does look like a ravioli), the light gray things are your heat rays, and the red would be the heat ray itself. The heat applied to either end should release powerful amount of steam that would, given sufficient amounts of heat, start rotating the planet.

It would be a big project to get an entire moon the size of Pan spinning rapidly.

So it would take probably millions or billions of times as much energy to spin Pan as it would take to spin a normal sized space station designed for an ordinary, typical purpose. Unless a story requires a giant space colony on Pan there would be no need to spin Pan to provide Earth normal gravity.

Astronomical bodies are also held together only by their gravity. If an astronomical body like Pan is spun to produce a centrifugal force of 1 g, many times its surface gravity and escape velocity, it will fly apart.

So it makes more sense to build a space base on Pan that largely has Pan's natural very low surface gravity. And some parts of some of the buildings, or some entire buildings, could be spun like giant centrifuges to provide 1 g at the rims of the spinning sections or buildings.

But if an inhabited base at the orbit of Pan is what is desired, that base does not have to actually be on Pan, merely in Pan's orbit.

A space station, rotating to provide 1 g at the rim, could be built in orbit around Pan or in Pan's L4 or L5 Lagrangian position.

Halfthawed already answered the first part of the question, so I'll add a bit more info:

Am I correct in assuming that different latitudes would have different "gravitational force"? The observed centrifugal force is dependent on the radius, and as you get closer to the poles, I would assume that would mean you're closer to the axis and therefore would have less gravity?

Yes. That happens on Earth too:

The surface of the Earth is rotating, so it is not an inertial frame of reference. At latitudes nearer the Equator, the outward centrifugal force produced by Earth's rotation is larger than at polar latitudes. This counteracts the Earth's gravity to a small degree – up to a maximum of 0.3% at the Equator – and reduces the apparent downward acceleration of falling objects.

The second major reason for the difference in gravity at different latitudes is that the Earth's equatorial bulge (itself also caused by centrifugal force from rotation) causes objects at the Equator to be farther from the planet's centre than objects at the poles. Because the force due to gravitational attraction between two bodies (the Earth and the object being weighed) varies inversely with the square of the distance between them, an object at the Equator experiences a weaker gravitational pull than an object at the poles.

In combination, the equatorial bulge and the effects of the surface centrifugal force due to rotation mean that sea-level gravity increases from about 9.780 m/s2 at the Equator to about 9.832 m/s2 at the poles, so an object will weigh approximately 0.5% more at the poles than at the Equator.

For people and a base, that would barely be perceptible. Not only because the difference is small, but also because in Pan's low gravity it could be negligible for everyday things. But for spacecraft launching and landing it might make a difference in fuel costs.

How would tidal forces affect the base? Pan is a tidally-locked moon, and I assume it would slowly work its way back to that equilibrium over time. The equations were way too complicated for me; am I correct in guessing that this would be at a timescale so slow as to be negligible?

The base would barely be affected by tidal forces, just like buildings on Earth are barely affected by the Moon's gravity (at least directly, though... Build by the shoreline and the high tide can spoil your fun). As for equilibrium, planets and moons take millions to billions of years to decelerate into tidal lock. If you can make a moon spin within a lifetime, you don't need to worry about it stopping within that lifetime.

Mount a motor on the proposed spin axis and produce torque

Imagine a motor which spins a heavy bar. The bar spins fast. The motor is powered as you like. The motor is anchored in the center of Pan.

This is why helicopters need a tail rotor in addition to the big central rotor.

The tail rotor is a smaller rotor mounted so that it rotates vertically or near-vertically at the end of the tail of a traditional single-rotor helicopter. The tail rotor's position and distance from the center of gravity allow it to develop thrust in the same direction as the main rotor's rotation, to counter the torque effect created by the main rotor

Without the tail rotor the body of the helicopter would start to spin in a direction opposite to the main rotor, eventually negating the lift produced by the main rotor.

Your spinning torque motor will spin much faster than Pan ever will, and so over time you can spin the planet as fast as you like. You do not need to throw reaction mass off the moon to make it spin. I leave as an exercise for the reader the math describing how long this will take for various spin speeds / bar weights.

Not the answer you're looking for? Browse other questions tagged reality-check space gravity .

10
How fast would a planet have to be spinning for the centrifugal/centripetal force to cancel out the force of gravity near the equator?

11
How would an earth-like planet with a habitable moon work and how to get there?
14
Get/Keep Air on the Moon!
10
How fast would a planet have to be spinning for the centrifugal/centripetal force to cancel out the force of gravity near the equator?
3
Why would a planet be spinning fast enough to fly apart?
1
How would fast rotation affect gravity?
0
How high does a tower have to be, so that centrifugal force launches a payload into space?