Giant rift with lava at the bottom

I’d like to consider continental rifts on massive scales. I’m trying to imagine one about the length of California that is so deep, a long “river” of lava flows along its length. The rift walls would be mostly vertical but would slope, slightly, such that it gets narrower at the bottom: from a few miles across at the top to about 100 to 200 yards across the lava river. I figured it would need to be at least as deep as the Marianas Trench, which is 6.825 miles, so perhaps 8 miles deep?

Gigantic fallen boulders wedged between the two rift faces, near the bottom, would provide an imperfect “roof” over the lava rivers, and floor to the chasm.

I expect surface rivers would flow into the rift, but having so far to fall, would turn mostly to mist before reaching the lava to be vaporized into steam. Combined with airflow due to the heat and gasses released at the bottom of the rift, this could create various weather conditions such as eternal mists that vary from water vapor to clouds of poisons, in some places, and powerful up/down drafts in others.

But I’m not sure such a feature would even be geologically possible for any length of time. For example, would the lava just rise up to the surface, like in a volcano? I know there are currents of magma beneath the surface of Earth; would these be sufficient to drive the river of exposed lava fast enough that it wouldn’t solidify- even with rivers pouring in?

I’m really hoping to find some way to make this work, as I can imagine some interesting ecologies and civilizations taking advantage of the various extreme environments it provides. Any natural planetary state (including uncommon/rare) is an acceptable condition to make this feasible, but it needs to remain a habitable world, and magic should be excluded.

I’m looking for answers that explain what events could create such a rift (secondary), and what conditions are required for it to remain active for thousands of years?

It has many problems

A deep rift where water flows into will fill up. It'll become mist before reaching the ground, touch walls, condense again, and start continuing their way down. The mist only works if there is enough heat and space to evaporate. Otherwise it'll continue it's way down. The trench is likely not very warm as the heat of the sun is too much divided over so much surface area even at the best of times, just like mountains are generally colder. Water arriving in the trench has difficulty evaporating and is likely to condense on the walls before leaving. That means that water arriving in the trench is more likely to stay there, making it a humid if not downright water filled hole. This isn't a huge issue in things like the great canyon, but if you go deep enough it'll happen.

Lava is liquid because it's hot. It is hot because of the immense pressure from the core generating heat. If exposed above ground it'll start cooling and thus solidifying. This would change a lava path over time. If it's somehow warm enough to stay liquid, there is precious few that can be used as a surface where it can move over. It would become lava itself.

It might not be completely impossible. You could say an underground lava stream from the core is pushed around close to the surface of the trench, which is then pushed back to the core. It can heat the surface close to and sometimes over melting temperature. Combine this with only very few water sources going into the trench and it might work narrative wise. Even just a lot of water and saying the heat of the lava evaporates the water enough. You don't need everything to be real for a story to work. There's plenty story element examples that people know doesn't work like that, but is accepted story wise (hacking, silencers, etc.).

Your land is a giant shield volcano. 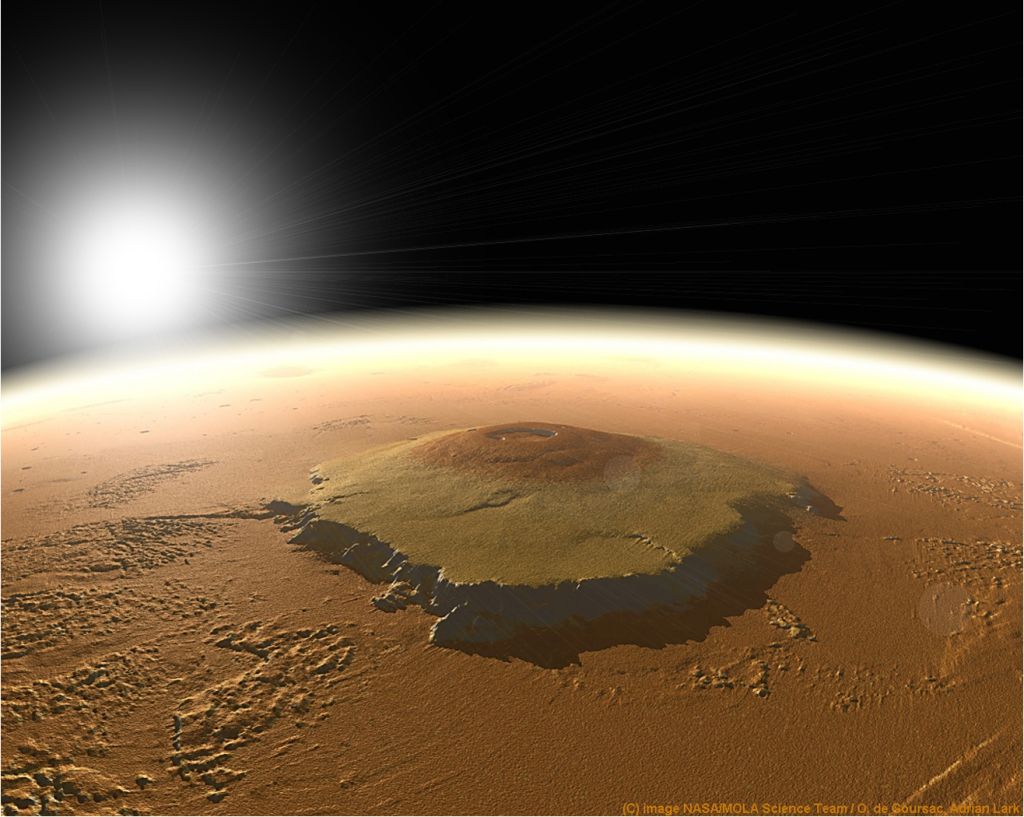 The largest of the volcanoes in the Tharsis Montes region, as well as all known volcanoes in the solar system, is Olympus Mons. Olympus Mons is a shield volcano 624 km (374 mi) in diameter (approximately the same size as the state of Arizona), 25 km (16 mi) high, and is rimmed by a 6 km (4 mi) high scarp. A caldera 80 km (50 mi) wide is located at the summit of Olympus Mons. To compare, the largest volcano on Earth is Mauna Loa. Mauna Loa is a shield volcano 10 km (6.3 mi) high and 120 km (75 mi) across.

...Another reason why the volcanoes on Mars are so massive is because the crust on Mars doesn't move the way it does on Earth... On Mars, the crust remains stationary and the lava piles up in one, very large volcano.

The land is an immense plateau that is the top of the volcano. The rift in the middle is really what remains of the caldera. No surprise it contains lava! Lava did come up and out of it in the past, many times, and that is what built the great plateau. It might happen again someday but has not happened for eons. The lava river is slowly flowing and if you get to the edge of the volcano you can see where it sometimes spills out over the side. This might make the shield more ovoid and longer in one axis.

You can have the lands below be ocean, or water, or unknown and invisible below the clouds.

8 mile deep trench is not possible to stay open because of the limit of rock's hardness. Mariana trench can stay open because water pressure can somewhat compensate the pressure that exists in the crust. Without such compensation, crust would act like a thin porridge. You can make a groove in it, but the walls would close before too long.

Not the answer you're looking for? Browse other questions tagged science-based planets geology or ask your own question.

12
What would the weather be like in an asteroid habitat?
8
What would life be like on the remnants of a shattered planet?
7
Could a planet larger than earth with half the gravity have a denser atmosphere?
10
Why would an antigravity abyss exist in a deep cavern?
24
What effect would liquid sulfur oceans, sulfur dioxide in the atmosphere have on visibility, sound propagation and other environmental information?
22
Is this coral lagoon geologically possible?
9
How many dead bodies are required to stain a river red?
5
Can a water transport canal be excavated by water power?
2
Valles - a world of deep canyons, could it work?