On a distant world, the atmosphere is different than ours - there is no oxygen but a high level of C02 like on Mars or the early Earth. This planet is otherwise similar to Earth but slightly warmer. The planet orbits a Red Giant as a sun. The soil is rocky, and high in Silicon.

If I want plants (photosynthetic plant-like multicellular organisms) on my planet, as similar as possible to Earth plants, how do I make them work? What would they look like and how does their chemistry function? There is no animal life, only alien vegetation.

Under circumstances of low oxygen, aerobic eukaryotes can switch to glycolytic metabolism. Humans can do this too, temporarily.

Anaerobic glycolysis is less efficient than aerobic, yielding a third of the energy per glucose molecule. Also there are byproducts that must be dispensed with or regenerated to glucose; lactic acid and ethanol are examples.

Maybe the original plants used glycolysis back when they could make sugar but were not assured of plentiful oxygen. They can still do it today.

Low oxygen stress often occurs during the life of green organisms, mostly due to the environmental conditions affecting oxygen availability. Both plants and algae respond to low oxygen by resetting their metabolism. The shift from mitochondrial respiration to fermentation is the hallmark of anaerobic metabolism in most organisms. This involves a modified carbohydrate metabolism coupled with glycolysis and fermentation.

So your plants would be glycolytic. That is totally legit biochemistry and not fiction. For a fiction I like the idea that they store the end product as either ethanol or lactic acid, regenerating sugar from it when there is lots of water and sun to use. Those plants might be harvested for their storage products in addition to their sugars.

It occurs to me that plants in a low oxygen environment might store the oxygen they produce in their tissues, just as they store the carbohydrate product. Gaseous oxygen is reactive and difficult to store though could be stored as bubbles in an aquatic plant.

Animals store oxygen using heme molecules. Hemoglobin is one. Myoglobin stores large amounts of oxygen that whales use during their deep dives. Your plants could have similar pigments that capture the oxygen product of photosynthesis and keep it handy for aerobic metabolism when needed.

Cyanobacteria consume carbon dioxide and produce oxygen as a waste product. They require water, sunlight and a few nutrients, but they do not require any oxygen at any point of their photosynthetic cycle so they could be a good starting point.

One possible candidate for your “plants” if you want to base them on Earth life forms would be Nostoc pruniforme which grows in gelatinous spheres with a smooth surface like a plum. These are typically a few mm or cm across but can get as large as 15cm or more in some cases.

That said the possibilities within chemistry are vast beyond reckoning so there is no reason why given sufficient evolutionary pressure on an alien world with an alien biogenisis that something like cyanobacteria should not evolve into more complex plant like shapes and forms as well as developing resistence to the oxygen it is itself producing as a waste product.

Do what aquatic plants do

Here on Earth, plants need oxygen for respiration, just like animals and fungi. Very many plants have very successfully adapted for life under water, although plants cannot extract oxygen from water.

How did they do it? They make their own oxygen through photosynthesis.

Some aquatic plants are very popular with people who keep aquaria, both as a source of oxygen for the fish and as landscaping material. 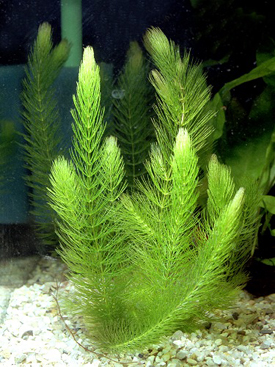 Not the answer you're looking for? Browse other questions tagged science-based science-fiction flora alternate-worlds or ask your own question.

11
What effect would a red sky and/or sun have on plants and animals?
14
Do different star types produce plants with different properties?
7
Would an alien forest look similar to some of our own?
6
Is this a viable/realistic imaginary species?
29
Can a planet harbor plants of different colors without one pigment outcompeting the others?
18
Are plastic plants plausible?
4
How would plants evolve with longer days?
31
Can there be plants on the dark side of a tidally locked world?