Best crops to grow in the post-apocalyptic wasteland?

A nuclear-WWIII happens, lots of people and animals die.

Surviving humans are afterwards forced to either hide out in small survivalist compounds on the surface, or self-sufficient underground bunkers. But, humanity continues on.

Here’s my question: Eventually, these people will need to start farming once again- surviving purely off canned food and freeze-dried rations isn’t possible.

My question is, what crops would be the best to grow?

You can fry 'em, boil 'em, stick 'em in a stew! Depending on your WWIII scenario any of the places you specified can go from "yeah you COULD but potatoes aren't ideal" to "perfect potato weather" land. They're resilient, cheap labor-wise to grow, and have the added bonus of whatever mutant nasties/marauding bands are out there being unable to easily destroy your crop! That was one of the top reasons potatoes took off in Europe. An invading army can burn your wheat field or trample your crops, but it's too much effort to destroy a field of potatoes. Which is why some of the most heavily fought-over areas in the time potatoes were first brought back to Europe are now the same areas whose cultures emphasis the crop. Best of all, they're REAL easy for Suburban Survivor to plant and harvest. Slice up a potato so every "eye" is separate, stick 'em in holes (vary the depth, because you didn't google this beforehand and have to play it by ear) and you're good! Well, good-ish, farming ain't easy! But compared to trying to do the same thing with other staple crops potatoes are a walk in the park.

From a dietary standpoint they're calorie dense, and have a surprising amount of other things like protein and basic vitamins/minerals, though not 100% of those required for a healthy diet. But as a staple crop they're a great calorie-filler. Also they're readily available in the areas you're looking to have your story in. Sure there are some foodstuffs that might be better, but what are the odds Joe Nuclear Holocaust Survivor has some esoteric south-pacific or African plant to hand in quantities to feed his group of survivors after a single harvest? Sure he might have some in his garden, but if you need multiple uneaten harvests to have enough crop to start feeding 100 people, and you have a 100 person settlement, you don't have the basis of a staple crop. Many other plants are so heavily modified (via GMO or old-school agricultural techniques) that the ones they sell in stores can't actually be used to grow more. But any given grocery store in the US is going to have piles of readily plantable potatoes.

The big problem would be you'd run a risk of overdosing yourself with potassium in the long term, as well as certain vitamin and mineral deficiencies if you want an all-potato diet. But as a "staple crop" where your survivors also have limited access to other foods or a good stock of basic vitamins potatoes would see you through!

As an aside, you'd 100% want to try and grow more than one thing if it is at ALL possible for you. The odds of a blight, or weather that would effect one crop but not another are REAL bad. If you want an idea of subsistence farming I strongly recommend THIS BLOG which talks about subsistence farming in the ancient world. Many of the comments and concerns would also be applicable to a post-apocalypse community bent on survival more than productivity. (which I know sounds odd, but trust me it makes sense.)

A quick rundown of potatoey goodness can be found here.

Prehistoric Agriculture From The Region

A lot of Native Americans in the region cultivated crops that were relatively drought-resistant. Here's a nice summary from Wikipedia: https://en.wikipedia.org/wiki/Agriculture_in_the_prehistoric_Southwest but it's mostly centered around New Mexico and Arizona. These are mostly beans, squash and corn. They've fed societies before in the same conditions and they can do it again.

Before there were GMOs there was the Mutation Breeding: https://en.wikipedia.org/wiki/Mutation_breeding#:~:text=Mutation%20breeding%2C%20sometimes%20referred%20to,mutagenic%20plants%20or%20mutagenic%20seeds. You just exposed a field of plants to lots radiation and checked to see if anything useful came out of it. The 50s were wild. Since you had a lot of radiation flying around you could include a brand new variety of food accidentally made the same way.

So, what sort of post-apocalytic wasteland are we looking at here? Is this a frozen wasteland, only just starting to emerge from the nuclear winter? Or a burning hot desertified wasteland, with little to no rainfall, a depleted ozone layer and global warming pushed over the edge? Because if it's the former, then might I suggest Durvillaea antarctica, or Southern Bull Kelp (also known as "Rimurapa" by the Maori, "Rimuroa" by the Moriori, "Cochayuyo" by the Quechua and Aymara, and "Collofe" by the Mapuche). This variety is already harvested as a food delicacy in Chilean cuisine. The vast majority of harvesting right now, in the present day, is for the purpose of extracting alginates (agar and carrageenan, both of which would also be very useful in their own right); but it has some of the highest potential yields of any crop, thanks to its extremely fast growth rate, high calorie count, high protein content (enough to replace meat altogether in some native Chilean diets) and an extremely high mineral content (enough to also serve as an extremely useful green fertilizer- albeit also with a very high salt content). Here's a bit of data about the potential harvest available to be reaped:

To put this in context- most modern countries have cereal yields equivalent to 5 tonnes per ha. From the calories delivered to the food system from cropland hectares, we calculate the number of people who are fed a nutritionally adequate 2700 calorie diet per day, considering 41 crops on 947 million hectares of cropland, and show that present day production of raw plant calories is adequate to feed 10.1 people/ha.

In contrast, even when growing in the wild, largely uncultivated (with the study above having taken place in the waters of the Kerguelen Islands, otherwise known as the Desolation Islands, one of the coldest and most desolate places on Earth), Durvillaea antarctica delivers a maximum yield equivalent to 2,260 tonnes per ha. That's a huge difference. Even when we look at the lowest cited figures for average crop yield (Mean standing crop of 123.5 tonnes/ha of shore, with values varying from 47 tonnes/ha on steep shores to 190 tonnes/ha on wide flat reefs, on the East coast of NZ's South Island- with individual plants producing one crop annually, and with at least two years required for new plants to become fertile), that still sounds like it should be more than sufficient to potentially kick-start a post-apocalyptic agricultural base.

Going by the nutritional values of the Durvillaea antarctica samples from the Kerguelen Plateau, that'd equate to a yield of 2,002,123 kJ per wet ton. From this we can calculate that the annual wet harvest required to sustain a single adult individual on a 2700kJ per day diet (985,500 calories per annum) would be just over 487kg, translating into a dry harvest of only 75.5kg/annum. I know, it sounds ludicrously small- how can you get 2700kJ from a daily intake of only 207g per day? But when the crop delivers 13kJ/g, the math all adds up. There's no denying that the seaweed has exceptional nutritional value- it's effectively the closest real-life equivalent to Soylent Green in existence, except that it's solid, orange, and has a texture like meat, with harvested Cochayuyo traditionally being preserved by being sun-dried (though it can also be freeze-dried) and then softened by soaking in a dish of water- with the expression "remojar el cochayuyo" (literally, "to soak the cochayuyo") also used in Chilean Spanish to refer to sexual intercourse. 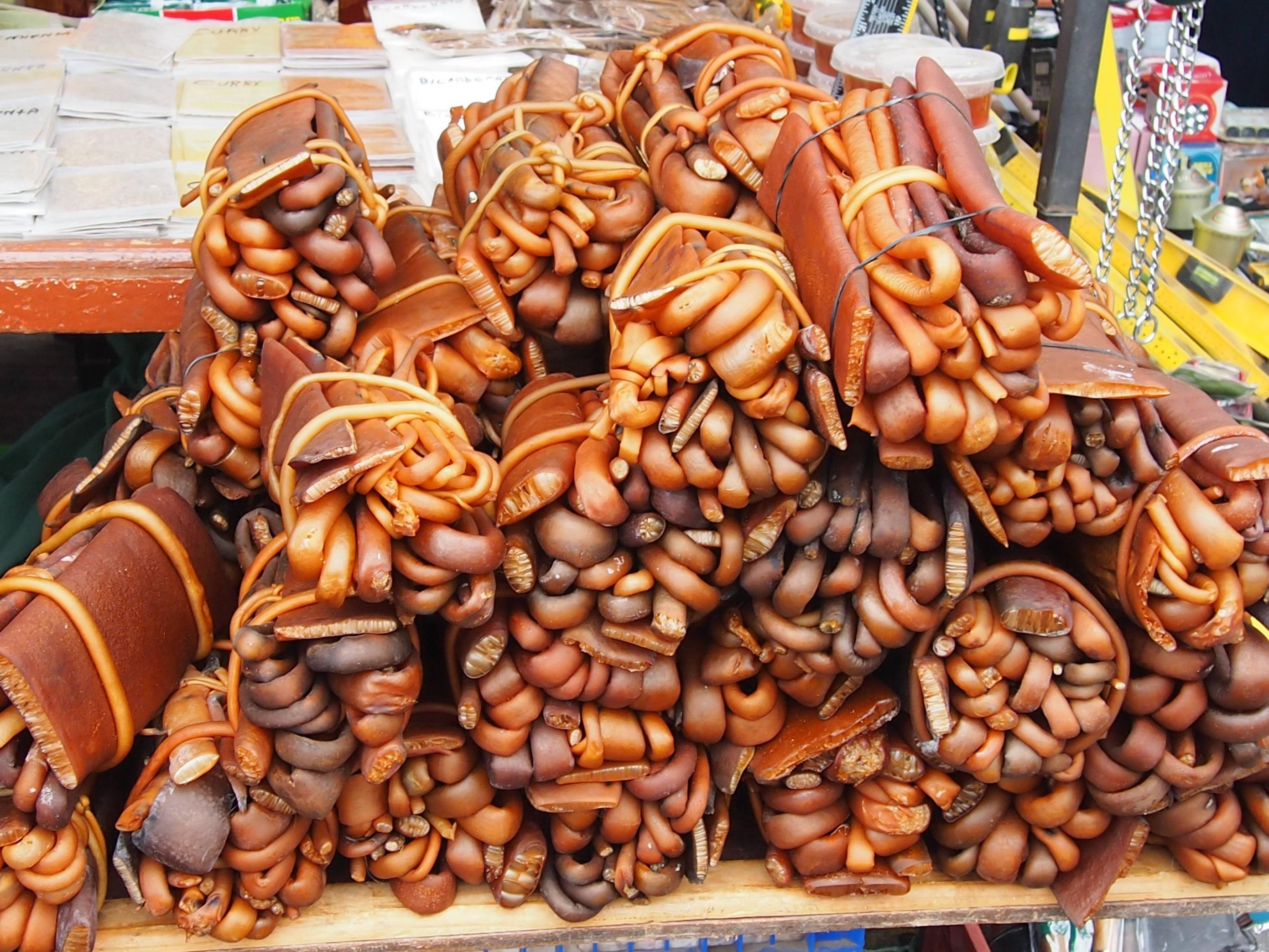 With a biannual harvest, using the very lowest estimate of 47 tonnes/ha, that'd still be adequate to feed roughly 48.2 people/ha- that's almost five times the population density which can be sustained by modern day land-based crop harvests, and enough to allow a relatively densely populated fallout shelter to feed its population even with a relatively small amount of arable land (or indeed, none whatsoever, so long as they have a large and enough body of salt-water to grow it in- or even terraces of their own filtered urine, if they were either sufficiently desperate or not squeamish at all). And studies now show that this crop can also be readily used for the relatively cheap, simple and easy production of biofuels such as ethanol, which would doubtless also be critical in a post-apocalyptic environment, fighting to survive through a prolonged nuclear winter period. As for its hardiness and cold-tolerance, well- given that it literally survives, and thrives, along the coastlines of Antarctica, you can't imagine nuclear winter in the American southwest giving it any trouble...

Not the answer you're looking for? Browse other questions tagged reality-check post-apocalypse agriculture nuclear-winter or ask your own question.

26
What would human survivors eat in a post apocalyptic Nuclear winter?
3
What are the building materials, crops, and livestock my post-apocalyptic community needs to survive?
8
The Diet of Space Dwellers
1
Crops to grow on a badly supplied planet
3
How fast would a post-apocalyptic population grow?
3
Best Animal for traveling through post-apocalyptic Colorado Mountains?
9
Founder’s effect causing the majority of people in a post-apocalyptic world to become colorblind?
4
Best hydroponic crops to support an underground society?