contrary to popular belief Werewolves are not actually cursed or infected humans but rather there own separate species. 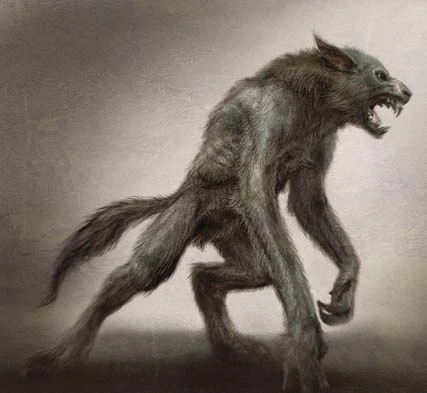 some basic characteristics of these Werewolves include:

Given these characteristics, what species (ideally canine) could they have evolved from, and what evolutionary pressures would lead to them?

Monkey around with it:

I'm taking inspiration from the comments, and saying that it's less of a jump to have some sort of primate, like a baboon or relative of a gorilla, evolve size, superficial appearance and new body proportions to fit your model than it is to reinvent the wheel and shift all these factors in a wolf. Especially with the tool and intelligence parts. A lot of hominids coexisted, and the ancestors of these folks could fit into a australopithecine world easily.

I would suggest that since wolf is the functional goal, that you have a parallel evolution of the dog to go with it. Your species could have a long-standing relationship with wolves, to the point that their own evolution has shifted in parallel to mirror their wolf companions. "Domesticate" the wolf early and your species will come to look, act, smell, and communicate more like wolves. In fact, the existence of your species might influence wolf evolution, making them more were-like. Each tribe of werewolves would select for companions that looked more like them, so a "pack" would consist of a matched set of wolf-dogs and werewolves.

I suspect your species won't have the same long-term speed and endurance of wolves, but the wolves can compensate for this, chasing prey and waiting for their "big brothers" to show up and finish off tough opponents.This would also lend itself to the myths of wolves transforming into werewolves, as a wolf pack would seem to spring a werewolf out of it. Tool use and human arrogance would fill in the part where people assume if an animal uses tools, it must be a human as well.

Your werewolves would likely not associate themselves with primates, and instead look at their own appearance and assume they are derived from wolves. Only a modern taxonomy approach and/or genetics lab could prove otherwise. The fact that they really ARE related to humans seems like poetic justice and completes the circle of the werewolf narrative.

Decreasing temperatures in Canada (pretty much)

Big creatures are selected when the weather is cold. (Basically, because you have more meat behind each surface unit, meaning less thermal energy lost per unit of mass. Mammoth-style.)

Long limbs are nice either when you need to run fast (because you hunt or are hunted), or on very rocky/unequal surfaces. Also handy for walking despite a thick blanket of snow, as you can reach the hard ground below. Youngsters are mostly bipedal for the same reason: be able to see above the snow until they are big enough.

Mostly nocturnal as it's easier for hunting when there's not much long visibility anyway (forests, etc, as opposed to savana,etc.). Nocturnal vision and a good sense of smell ensue naturally to spot and track a prey.

Fast running would be handy if hazes and deers are most of the menu.

So, the natural ecosystem of a werewolf would be almost the same as the wolves: rocky, very cold low-altitude mountains, with a lot of trees and snow cover.

To go from wolves to werewolves, turn the temperature colder and colder overs a few hundred thousands years, and you should be close enough.

You're Looking for Mutations in the HOX Genes

These genes regulate the placement of limbs. They are part of the family of homeobox genes that regulates our shape (humans have around 200 of them).

A virus could have introduced a mutation into an entire sick pack, causing malformed limbs. These limbs are well-suited for bi-pedal walking. The deformity is passed along to the pack's children.

Unless I'm mistaken, this is the only substantial mutation in the question.

In What Environment Would This Mutation Thrive?

For primates living in high-biodiversity areas (where a large number of competing predators could eat them on the ground) the ability to get off the ground protected them from many of the dangers.

I'm looking at my three dogs and trying to imagine them as climbing creatures. They would still be pack animals. Still territorial. Maybe even more inclined than gorillas to attack. Would tend to climb when frightened and move away from the threat quietly in the trees.

How are these different to baboons?

Baboons may not be there with the tool use and are not canines, but they look it.

This is the easiest solution. Humans kinda love doing sucky things to dog bodies, maybe the same people who thought it'd be cute to make pugs thought dogs walking around on 2 legs was cute too. There are some dogs that do this but they're usually abused. It's really bad for them but over the years it might become more inline with purebreds-are-unhealthy bad for them.

Okay the tail thing is going to bother me. A tail like a wolf's isn't useful with bipedalism because it's for quadrapedal mobility so if it's there it's probably vestigial (note that if you go with another species to evolve in there's no reason for it to have a wolf tail). And also why would they be communicating with it if their eyes 4 feet above that and the tail's behind their back? They'll be communicating with forelimbs and faces.

The Problem With Making Bipedal Wolves

We've got pretty good theories on what makes animals turn bipedal because we've thought a lot of them through in studying human evolution (https://en.wikipedia.org/wiki/Bipedalism#Evolution_of_human_bipedalism). Unfortunately, none of them apply to wolves. They're either omnivore/herbivore traits like digging up roots, reaching for fruits, or scaring away/spotting predators and canines aren't as omnivorous by a long shot. Or they're things canines already do well like moving across wide-open flat spaces, adapting to temperature differences (canines have different fur adaptations), or getting across water.

One Potential Reason For Bipedalism

The best way to turn an animal bipedal is by encouraging already-bipedal behavior through selection. The one reason wolves already use bipedalism now is for fighting up close: https://www.ncbi.nlm.nih.gov/pmc/articles/PMC3097185/. So if your wolf was regularly getting into intense fights with little opportunity to get on its hind legs it might just stay upright. The problem is how does an apex predator with with incredible senses get into so many surprise fights? Best I can come up with is insanely intense sexual selection with inter-species fighting. But then you'd need large litters and such a heavy male-to-female ratio that wiping out a ton of males to find a mate for generations was justified for it. Do you have any invisible, quiet, low-smell fighters that hate wolves?

Not the answer you're looking for? Browse other questions tagged science-based biology creature-design evolution werewolf .

2
A humanoid with six arms?

27
Anatomically Correct Werewolves
7
What factors would allow this caninoid species to evolve successfully?
6
Alternate paths to orthostasis
5
Could these trolls exist?
4
What evolutionary pressures would lead to Trolls?
4
Werewolves and sense of smell, what is reasonable for them to accomplish with it?
6
How much floofy can my werewolves get without making thermoregulation a problem?
3
Evolution of Rockfolk