How can I make my often-lightning-struck mesa sound like giant drums?

Premise 1: I prefer to know if it's possible to realize this without much handwaving (hence the science-based tag) but, as this is going to be in a fantasy setting, answers which make it possible with just a couple little details explained by magic (e.g. the mesa is largely composed of handwavite crystals) are acceptable.

Premise 2: I looked up other questions on the site and went through the "similar questions" before submitting, but none of the questions nor the answers is really applicable imho.

Say I have a landscape which looks more or less like this: 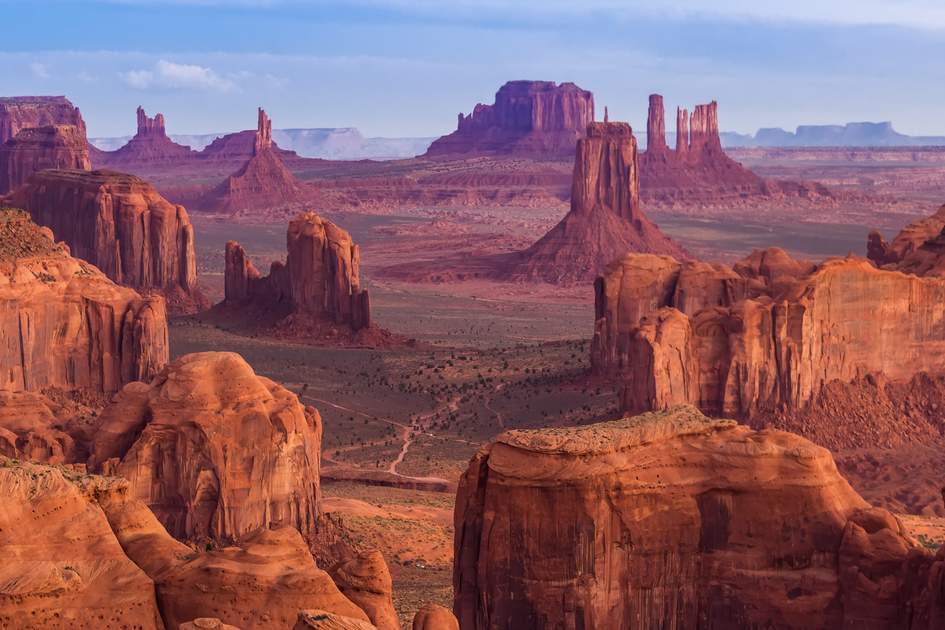 I want this area to be called "The Drums" by the local populace, because the top of the rock formations attract a lot of lightning strikes and, when struck, resonate as if they were giant drums.

In order for this to be possible, I need two things to be plausible:

1: the material/shape/whatever of the mesas should attract lightning.

Quoting Wikipedia: The place where lightning occurs most often (according to the data from 2004 to 2005) is near the small village of Kifuka in the mountains of eastern Democratic Republic of the Congo, where the elevation is around 1,700 metres (5,600 ft). This region received 158 lightning strikes per square kilometer (409 per sq mi) a year. This doesn't say whether it's on land or on a lake.

Also, I couldn't find any source on whether or not there are certain kinds of soil composition which attract more lightning.

So: how do I make it so that the mesas receive at least 200 lightning strikes per square kilometer per year? This of course can be concentrated in a specific time window (e.g. march to october or whatever). The more often they're struck (even in a limited period) the better.

Like, if there could be a "Thunder Week" once a year in which you can see three or four lightning strikes per minute for entire hours every day, that would be perfect.

2: the mesa/mountain should resonate with thunder.

My first thought was: the mesas are hollow inside and reverberate easily.

Even so, I couldn't find any source as to where the sound of thunder originates from when lightning strikes the ground: is it the surface? is it the clouds? is it all along the entire "body" of the lightning strike?

(EDIT: it's pretty much the same principle as a jet's sonic boom, caused by the extremely quick change in temperature. So the answer to this sub-question is "all along the 'body' of the lightning strike". Thanks @AlexP)

If the sound originates either on the struck surface or all along the lightning bolt, does it physically make sense that the mesa's hollow body resonates and amplifies the sound of thunder?

If (and only if) one or both of the above are completely unrealistic, what is the smallest change I need to make (via magic or whatever wavy movement of my upper extremities) in order for it to make sense?

The thunder echoes among the mesas.

This is easiest because it is real. Tall hard surfaces (like skyscrapers, or stone monuments) will cause thunder to echo. The thunder can bounce around your monuments like rolling drums. Thunder in the city can really sound like this.

A thing I have noticed with the "downtown thunder" effect (and other prolonged echoes, like whistling in a stairwell) is that the echo progressively gets higher in pitch. Thunder loses the low tones and gets more brassy. Could this be like a Rayleigh effect with sound - shorter wavelength less likely to be absorbed, more likely to bounce? If so I have not read it described; links in comments welcome.

This seems a little bizarre -- how can you tell if the mesa is making a sound above the peals of thunder?

Better to have dry thunderstorms to preserve your landscape which otherwise will dissolve like sugar under the downpour.

You can still have lightning, and thunder. The 'drumming' effect can be provided by resonance of the thunder in the canyons around the mesa, which are conveniently arranged so that their width corresponds to exact numbers of wavelengths of the thunder produced. The thunder echo from one canyon can come back and combine with other echoes so you don't get just one boom of thunder but a whole drum solo with each stroke of lightning.

The sound is made by the lightning.

And it is a white noise: 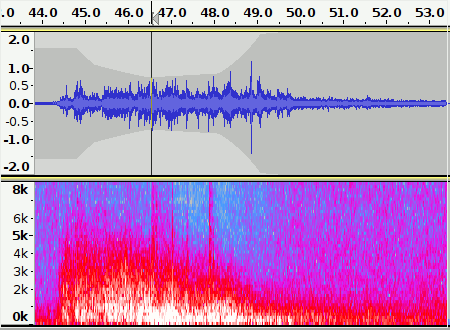 So, if you want the "drum" effect, you need for the mesas to modify the sound. This means you want to absorb high frequencies very, very quickly. You need the mesas to be coated in something (a moss?) that acts like sound foam. This will also act on any sounds (shouts, shots, birds, rockfalls) that might be generated in the area.

For that, you need a buildup of static charges in the air. The mesas would need to create and direct a flow of rising air in such a way that a permanent Van der Graaff columnar phenomenon is established. You need constant and appropriate humidity conditions; they could probably be recognized hours in advance. In Catatumbo, it is a bog where the Catatumbo river flows into a lake, and the storms around the lake, that establish the appropriate conditions.

The lightning mechanism is not very well understood, but upward streamers might be increased by ionization (i.e. natural radioactivity).

The way I see it, the only way to get that "drum like resonance" is to have the lightning make a second jump from ceiling to floor inside the hollowed out mesas.

Even then, if only hollow with no outlet, the sound would be muffled completely as the needs for structural integrity would prevent the vibrations that would let the sound travel outside.

All hope is not lost however, simply having a nice cave entrance to the hollows is enough to let the sound of the thunder resonate out. it would have an additionally cool effect of making all the drum sounds directional as it bounces out in one direction. (potentially bouncing off some of the other mesa's or large landmarks in the area).

Cool story side effect? some locals might know of the best places where the sounds of multiple mesa drums intersect for a cool listening experience.

Not the answer you're looking for? Browse other questions tagged science-based reality-check weather lightning or ask your own question.