A missile that's launched from "small' flying dragons. How can it take advantage of that?

So, when I say small dragons, they're still around the size of a Clydesdale horse, of course. While this might seem small, that's because you're watching them on a small screen and because people forgot what shot composition is. Believe me, they're big enough to wreck stuff.

Anyway, it's rare for them to be in a more modern setting, but I was like "Why not?" So, now there are dragon marines.

A dragon can fill a unique niche in a squad. They're usually either a gunner, which means we strapped an automated SAW (Squad Assault Weapon) on their back; or an anti-vehicle rocketeer (thus, I welcome the Long War fans) when we strap some missiles on their sides. Originally, my choice was the FGM-148 Javelin. When I first saw Javelins I was pretty happy with what it could do, but dragons have unique problems and advantages, compared to a regular operative.

Dragons can reach altitudes of 4.6 kilometers high and can glide through the sky at 35 m/s. I limited their carrying capacity to 80 kilograms for equipment, though I'm unsure of the real limit. They can carry less but are able to fly, the headwind helps the infrared sensors cool down faster, and the missile can be dropped, so no need for a soft-launch system. I'm actually sure dragons would be slightly better at handling backblast.

They're also more vulnerable to AA, so MPADS and 40 mm guns, though those are rarer. There are countermeasures for MPADS in real life.

So, why not make a missile that takes full advantage of the dragons' capabilities?

Rocketeer dragons tend to go for fortified positions, APCs, and rarely, tanks. Dragons prefer not to slow down and keep a safe distance (at least two meters) while doing so. If they spot an AA cannon, they dive behind the nearest obstacle and try to get out of the thing's firing range on foot.

The targets are fairly advanced, though still slightly below the Foundation's technological level (the faction the dragons are the members of). This means an FGM-148 Javelin can one-shot them.

Just what kind of missile would suit rocketeer dragons the most? Keeping them alive is the priority, but combat effectiveness is also important, meaning weight should be as low as possible, especially if we want to leave space for MPADS countermeasures.

For most missions, take the Mark 47

A guided missile is nice, but the biggest advantage of the Javelin and other guided anti-tank rounds is it's attack profile. It climbs up and then attacks from the top, where the armour is the weakest. You don't need that, because you're weapons platform is already above the tank. So, you just need to get explosives into the enemy as fast as possible. A few armour penetrating grenade rounds travelling at 400km/hr will do the job nicely. 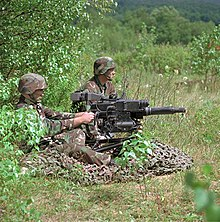 It's great for fortified positions and APCs, and, from above, can easily take out a tank. It weighs 18kg, and includes thermal sights. Range of 1.7km ground-to-ground (but will be higher from a dragon in the air)

Each grenade weighs 227 grams, so your dragon can carry about 270 of the things with the launcher. It's belt fed, and it can empty all 270 in about 15 seconds in rapid fire mode. These things can crater a runway or road enough to make it unusable for weeks in under a second.

These things can take down a helicopter in a single shot.

(Oh and it's legal to own by a civilian in America. Joy)

For a very long range attack, use AGM-176 Griffin 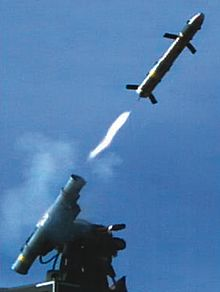 Your dragon can carry 4 of these things. They're laser or GPS guided, range of 15-20km when air launched.

These are used on Predator UAVs to kill whoever it is the US government currently targets for extra-judicial killings this year. (Journalists?).

If you have a few dragons going into battle at once, equip at least one with AIM-92 Stingers for air defence. 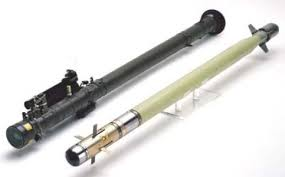 A single dragon can carry 5 of these. They, they are passive fire and forget heat seaking air to air missiles, with a range up to 8km.

If your dragons are being attacked by F-35s you may want to carry AIM-9J's, you can only get one per dragon in the 80kg allotted, but has a tighter turning circle, greater range, and higher max speed.

I honestly can't think of another viable option. All of the fire and forget missles with substantially longer range, like AGM-114's or PARS 3 LR's, are around 50 kg in weight. And that is without the targeting equiptment.

Maybe you could modify your Javelins, so that you can carry 3-4 launch-tubes and only one targeting sight.

Alternatively, strap a bunch of unguided rockets, e.g. Hydra-70's, to your dragons, let them sneak up on their target and then unleash a volley before disappearing again.

Not the answer you're looking for? Browse other questions tagged science-based weapons dragons flight or ask your own question.

4
Is there any way to estimate the carrying capacity of large fliers?

4
Anti-Dragon armor, shields and melee weapons
9
How to restrain your dragon?
3
Poison needs time to affect a creature (especially large ones). What strategy would dragonslayers use then?
11
How could dragon society avoid interacting with humanity?
1
How could a pre-emptive attack on dragon make sense?
5
Would caves in general be practical lairs for a dragon?
21
What could dragons do in modern-day combat?
11
Increasing respawn times. How?
22
Are dragons useless when there are guns?