Is there any way to estimate the carrying capacity of large fliers?

When it comes to the usefulness of large fliers in modern combat, the most important question is:

"How much can they carry before they can't take off anymore?"

It would be beneficial if you could use a smaller (by fantasy standards) dragon as a platform for Javelin missiles, or to transport members from the rest of the squad at 35 m/s (wait, that's illegal in most states!) and take off from places helicopters can't even try.

Giant pterosaurs had masses around 200-250 kg. They used their flight muscles for taking off, probably the most difficult part of powered flight.

Basically, they pole-vaulted with their wings. See this video of a vampire bat and this simulation to get a better idea.

This is the most rational theory of how large pterosaurs got themselves into the air. I even tried it in my room using my legs as forelimbs and arms as rear limbs. The distance was 6 ft from starting position and being 2.5 ft high at 6 ft (estimates.) Point is if I can do that, a pterosaur could very easily.
-CookatooDude, professional youtube commenter

The muscles themselves were the fast-glycolytic type, meaning really high power but abysmal endurance. In other words, giant pterosaurs only took off when threatened or when they had to make long treks. 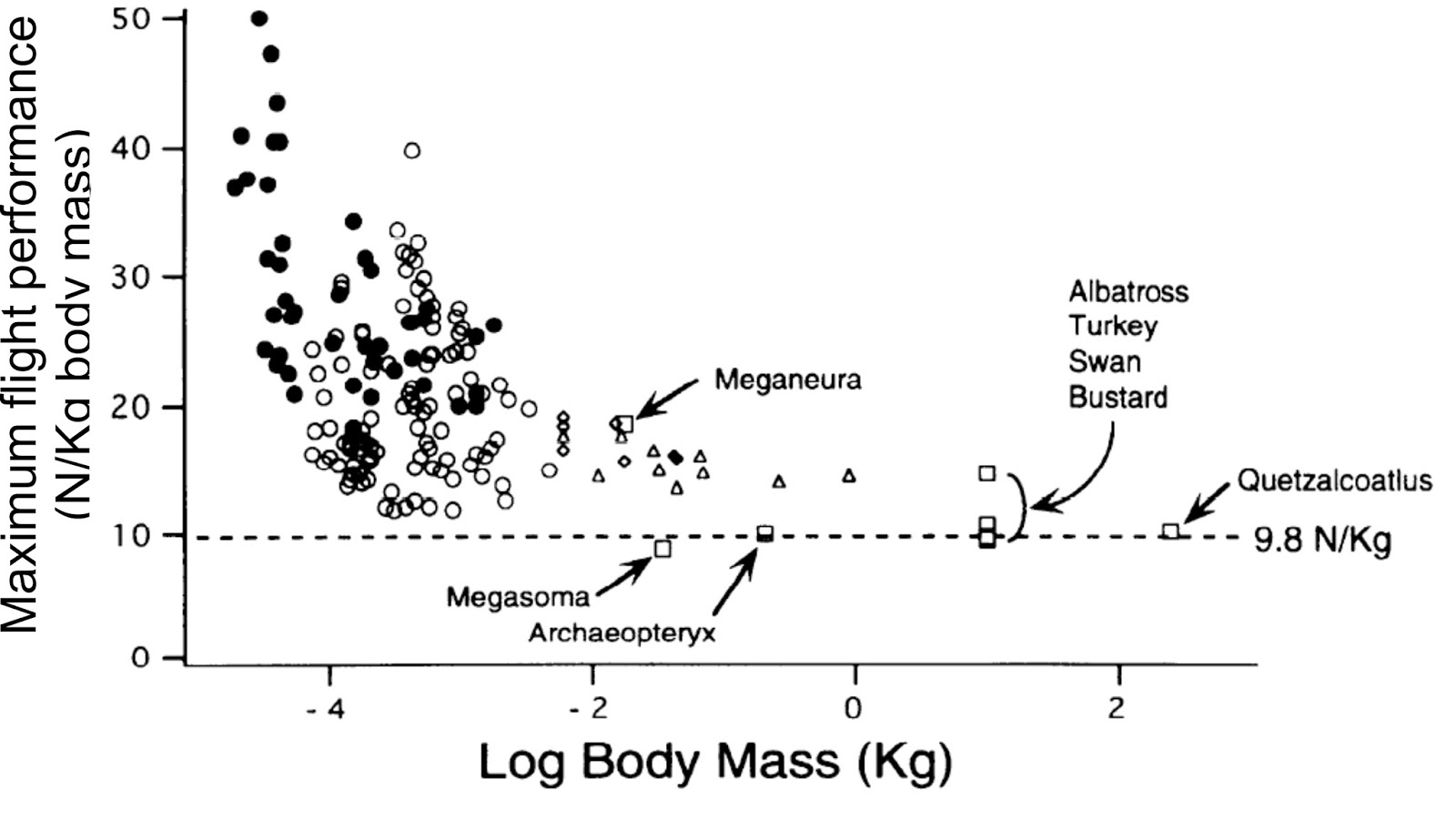 Launch for giant azhdarchids - like Quetzalcoatlus northropi - would be no more challenging than it is for large birds. The dotted line on this graph represents the minimum muscle energy output needed for flight. Using the same mechanism of anaerobic muscle power as large living fliers, giant azhdarchids are on the right side of that line. From Marden (1994).
-Sauce: https://markwitton-com.blogspot.com/2018/05/why-we-think-giant-pterosaurs-could-fly.html

Bioengineered giant fliers differ from this formula in a few ways.

For starters, Dr.[REDACTED] quickly realized that organic nanotechnology is perfect for enhancing a war economy, so these fliers have access to hardy and nutritious food from the get-go.

Second is the [REDACTED] (named after the professor) Process, which allows organics to synthesize graphene and other carbon allotropes and use them to reinforce collagen-based tissues. Yes, I just realized that was in Avatar. A bit painful to see how much worldbuilding went into a project, only to be scrapped at the last second by a coward.

This, of course, leads to tissues with higher stiffness and tensile strength. Not to mention that graphene is 10 times faster than steel when it comes to dissipating forces, leading to increased resistance against firearms.

The third is that these creatures are bioengineered, so they don't have to abide by evolution or phylogenetics, even if Dr.[Redacted] had tried to strike the middle ground between artistic and natural, we still had creatures with four legs and a pair of wings.

The square-cube law only applies to things that you scale up with the "scale" tool, rather than tweaking the design itself. As Michael Eisner, former CEO of the Final Order, put it:

Okay, I stop with my weird humor. Basically, what I said in the fake quote you just read up there. You don't have to increase the length of the muscles fibers, you can change the lever to trade traveled distance for power, or use the super tendons to connect a bunch of muscles to the humerus, or an entirely new bone.

In fact, you could have two wings "fused" into one, right next to each other.

At any rate, some things can't be tweaked effectively without diminishing returns. Traveled distance (of the wing) is usually a fix and muscles still take up space. Giant pterosaurs had rather short torsos, so we can put two sets into a dragon without anyone noticing, but I have my doubts about a third set, especially its coordination and kinematics. It would be too far back to effectively participate in the takeoff.

So, I was wondering, is there a quick and dirty way to roughly approximate how much weight can my theoretical giant fliers carry before they become incapable of taking off? 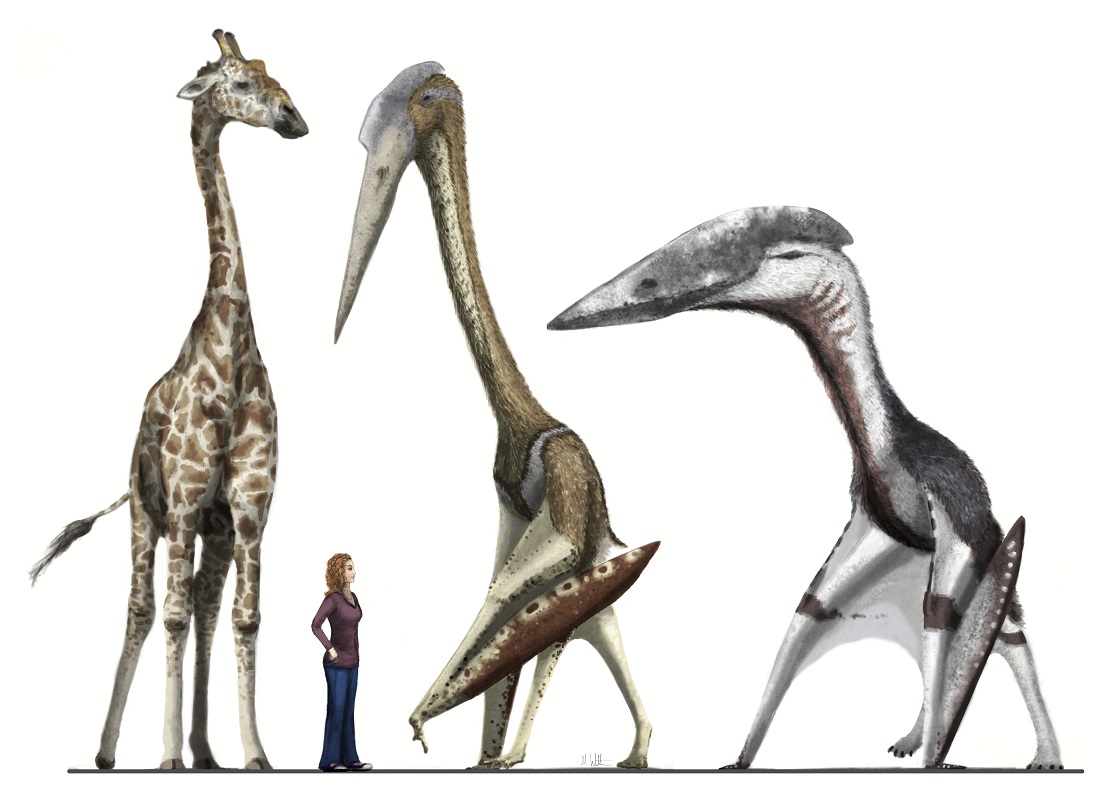 If you change the rules, you can make anything you want

Once you introduce bioengineering and nanotech into the mix, the regular rules don't really apply any more. Instead of looking at biology, I suggest studying aviation for your inspiration. You're already doing a lot of hand waving, so you're really looking for numbers that are plausible.

You could use a calculator for lift force to get a really really rough idea of the forces at work. Here are some numbers that could be plausible in your bioengineered critters. Your actual choices can be wildly different.

Not the answer you're looking for? Browse other questions tagged science-based creature-design earth-like flight .

2
A missile that's launched from "small' flying dragons. How can it take advantage of that?

5
Can my heraldic dragons fly?
8
Is a 500 kg flying creature possible?
3
How could six-limbed dragons launch like vampire bats and giant pterosaurs?
4
Increased flexibility for dragons?
4
What's the scalability of this flying strategy?
6
Unique take-off strategies for six-limbed creatures?
4
Humanoids with wings, how do they take off?
15
What would martial arts for dragons look like?
3
Flight drag and the superior limit size for hexapod dragons?
8
How would the anatomy of a bird that flies with its legs work?