A Glebsig (plural Glebsigi) is an intelligent alien species from the game Stellaris. They look like this: 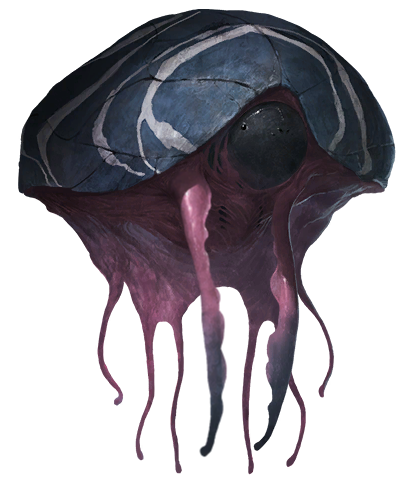 Glebsigi can float in mid-air with their tentacles hanging below. Glebsigi manipulate things by using their tentacles much like human fingers (wrapping 3-4 around an object and floating upwards to move an object).

They are capable of moving in all 6 directions without barriers or wind.

Glebsigi live on a planet with an atmosphere identical to Earth's atmosphere.

How could Glebsigi evolve from jellyfish/squid/octopi? How would their intelligence evolve?

Very slowly and probably not at all

Any evolution of the kind you suggest would have to happen over a long period of time. In reality, it's really unlikely that this could ever happen.

But since this isn't Biology SE, let's come up with a plausible way it theoretically could happen. You could have an aquatic create evolve an air bladder to control its buoyancy. Then imagine an evolutionary pressure to be as light as possible. Either food is just above the surface of the water or predators are on the prowl. Now imagine that this creature has a symbiotic relationship with a form of algae that produces hydrogen gas (which really exist). Over time, evolutionary pressures select for the creatures that rise the highest, eventually driving the winning creatures clear out of the water. As they gradually rose higher and higher, they'd have to evolve to breath dry air. And they would also need some way of controlling their movements in air, unless they use their tentacles to pull themselves along. They'd also have to have a really big air sack. Even with the lifting power of hydrogen, you'd need something like 100 cubic feet of the stuff to lift a 7-pound creature.

Not the answer you're looking for? Browse other questions tagged evolution xenobiology bio-mechanics species anatomically-correct or ask your own question.