Most efficient way to break up planets for material harvesting

Rocky planets are terrible. Convenient Earth like planets are rare, but most are too cold or too hot. They are covered with sand. I don't like sand. It's coarse, and rough, and irritating, and it gets everywhere.

Instead, our burgeoning K2 civilization doesn't bother with inhospitable planets anymore, when it can build trillions of nice climate controlled O'Neil cylinders with the perfect gravity levels and conditions for life. To build these, swarms of self-replicating Von Neumann probes are dispatched ahead of the colonization fleet and are tasked with breaking down the local planets into raw materials for use as construction materials.

Asteroids are a nice source of materials with their readily accessible mass, but asteroids only account a tiny fraction of a fraction of all the mass in the system; the rest is tied up in the strong gravity wells of planets.

So what is the most energy efficient method for our probes to break up the planets and get their materials out of the gravity well? A space elevator is nice, but a very complicated solution that relies on material manufacturing technology that does not yet exist. What about destabilizing the orbit of a moon and smashing it into the planet to "liberate" some of its mass? Could you "leverage" mass by using an asteroid to destabilize a small moon, which you use to alter the orbit of a planet so that in a thousand years it's orbit collides with another planet? Bonus points for creativity here and math based answers are always appreciated!

Freeman Dyson (the man who conceptualized the Dyson Sphere) had thought about this, and created the Dyson Planetary Spin Motor to break planets apart (this has nothing to do with the other Dyson who makes vacuum cleaners). 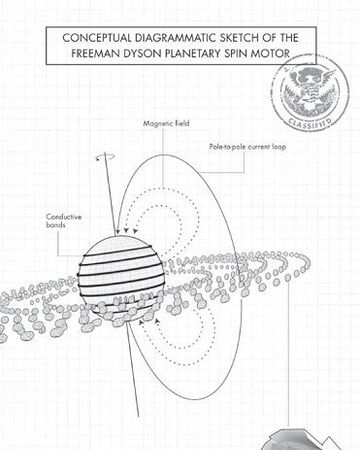 Essentially, you turn the planet into a rotor by wrapping the planet with a metal grid and energizing it. For a planet like Earth, the rotation speed could be doubled in about 2500 years, and the planet accelerated to the breaking point in @ 40,000 years. Obviousy, you could gain efficiencies through various means, including using a superconducting grid instead of a metal one, and using orbital power stations to beam far more energy into the grid.

This would likely work on any rocky planet, and does not need conveinient other planets to collide with - even a single planet orbiting alone can be dissasembled this way.

If you do have more planets, another writer named Paul Birch had some interesting ideas. Using a device called a "light sail windmill" in near solar orbit to capture the energy of the Sun, he proposed to use streams of high speed particles to change the orbits of planets, or even their spin rates (the main idea was to spin up Venus so it would have a 24 hr day and put in a co orbital position to Earth). The details can be found in his papers here: 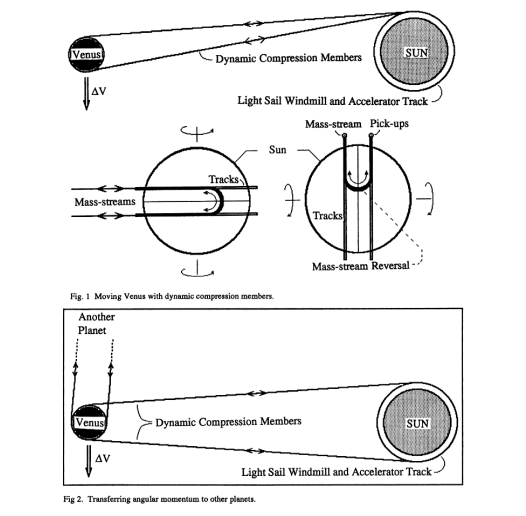 Since he is speaking of using far more energy than Dyson (about 0.2% of the Sun's radient energy for 30 years), the time frames are much shorter - a 30 year project to move Venus would be within the working lifespan of an engineer today. Moving planets rapidly around the solar system provides many opportunities to crash them into each other, use gravitational "slingshotting" to adjust the orbits of multiple planets, or, since the stream of pellets coming from the light sail windmill are carrying so much energy, use them directly like a sort of cosmic chainsaw to carve up the planet (the pellet stream cannot be reused if you do this).

So here are two theoretical methods to mine entire planets for material.

If you're trying to break up a planet for mining, you need to overcome its gravitational binding energy. It doesn't really matter how you do it -- blowing it up, lifting it piece by piece, vaporizing with a giant mirror -- you need to pay this energy cost to get rid of the gravity well. For an Earth-sized planet, this is roughly $2*10^{32} J$, or about seven days of solar output. It's a good thing you've got a Type II civilization -- this is an expensive proposition even by your standards.

As a slower alternative, you could send the planet on a close flyby of a gas giant, within the Roche limit, to break it up through tidal forces. This is cheaper: for Earth, it would only require about $3*10^{31} J$, one day of solar output, to change the orbit, with the breakup energy coming from the gas giant's kinetic energy.

Use Von Neumann swarms to build power plants, refineries, and magnetically accelerated launch platforms and systematically deconstruct the planet. Material payloads would be intercepted by orbital platforms and processed or rerouted accordingly.

The biggest hurdles to accomplish this are material availability and energy consumption.

Powering an O'Neil cylinder across interstellar distances probably requires fusion reactors, so we'll assume your tech level has mature fusion reactors. If not, then a combination of fission and solar panels will have to suffice to power our mining operation (and probably slow it down a few orders of magnitude).

Step 2: Survey the planet for potential mineral deposits and disperse the probes accordingly.

Step 6: Watch your autonomous swarms continue to devour the planet and churn out more spaceships already in orbit.

Build a big dish at the Lagrange point and heat it up using the power of its own star. The beauty of this method is that by controlling the heat, you can first vaporize off any elements you are not interested. Then carefully turn up the heat and vaporize off the elements you are interested in and capture them. This combines collection with purification (or more correctly, fractional distillation), and saves you schlepping impure materials to some other site for purification.

I was trying to work this out and the best solution I could think of on my own is the oldest technology ever: banging rocks together. As you suggested:

What about destabilizing the orbit of a moon and smashing it into the planet to "liberate" some of its mass?

But let's increase the scope of things here.

Boffins believe that the Moon formed when a planet the size of Mars collided with Earth some billions of years. The debris from both planets went into the Earth's orbit and after some unspecified amount of time coalesced into the Moon.

So what you really need is two rocky planets of about Earth size. Throw them against each other. The planets will mostly disassemble and you will get a lot of raw material floating in orbit of the star.

To illustrate how it would go: here is a video from the University of Bristol simulating two super Earths (i.e.: two rocky planets with each having the mass of 10 Earths) colliding head on: https://www.youtube.com/watch?v=0GvfoD-UW5A. The resulting debris would have the gravity of both planets, but you could easily scoop the material in flybys.

How long would it take for our fleet of probes to accomplish this?

Depends on the technology used to move the planets. You could either use gravity slings (could take millions of years) or you could move a gas giant by force and have it drag the rocky one around (could take millenia).

You could put all of your mineral processing equipment in one place and bring those pesky rocky planets to the processing center. On Earth, that's the strong preference. Ships, cars, and other movable objects are brought to centralized places to be broken down.

Your probes could move the planets with a series of solar sails as described in the journal Astrophysics and Space Science. As each planet arrives, it would smash into whatever planets are already there, breaking it down into smaller pieces. Your probes could then chew on these smaller pieces and convert them into materials. Whatever you want to do with those materials could be located in the same solar system, which would simplify your probes.

Space elevators are OK for planets that spin fairly fast & aren't too large. Earth is marginal for a space elevator of even the strongest possible material.

An ORBITAL RING would be far better. https://www.youtube.com/watch?v=LMbI6sk-62E&t=4s

Not sure if this helps any, but here it is-

in one of the star wars books i read once(I can't remember which one) we learn who built the death star. they had no idea it was built for destroying planets, but just thought it was for mining. the death star would be used on dying planets to allow the interior metals and resources to be easily accessed rather than digging all the way through the planet. of course, such a station would be nearly impossible, but i think it might help with your mining. just be careful not to point it at people or mess up orbits or anything.

Not the answer you're looking for? Browse other questions tagged science-based mining or ask your own question.

4
Generating a magnetic field for planets with iron-cores that is revertable?
6
Moving asteroids into a planet's orbit to increase rotation to produce a magnetic field
9
How would this tidally locked planet be affected by its moon and would the moon have a deaccelerated orbit?
13
Are trojan planets possible? Are habitable trojan planets possible?
19
A moon that is hard to orbit
0
Ideal material for Von Neumann Probes
3
Is this rogue planet capture process possible?
6
What are good lower and upper bounds on year length for habitable planets?
3
Climate model for an S-type binary