Anatomically Correct Creatures that can't be effectively dispatched with guns, but only swords, spears, clubs, quarterstaffs and their like

The safe word is "combined arms". This is extra-true for fantasy elements in a modern setting.

Dragons and tengu are helping with recon for their squads along with setting up mortars and sniper nests in hard-to-reach places. The Foundation is also constantly switching between costly but hard-hitting mechanized troops (tanks, fighter jets, etc...) and smaller, nimbler organics.

Similarly, I wanted to explain the presence of quarterstaffs, swords, and clubs as complementary to modern-age firearms and artillery. The only unique advantages, however, are their ammo (practically infinite), relative quietness, ease of manufacture, and tolerance to damage.

But when to use them?

They're still fighting at long distances and you probably don't want to risk getting closer. So, if I'm already involving genetically-engineered creatures, such as dragons, I might as well add something that's specifically designed to screw over firearms but can be more effectively dispatched with weapons like clubs, quarterstaffs, swords, spears, etc...

I don't have any idea what such a creature would be, not even a clue.

Knowing Worldbuilding, someone would probably have said that the answer is children. You don't want to waste your ammo and the quarterstaff gets the job done just as well. Well, now that kind of answer is invalid |)

So, how would this creature work?

The first thought that occurs to me is a creature comprised of a body like a giant sponge—connections everywhere, so that poking a one-dimensional hole through it does virtually nothing; you'd need to cleave a 2D plane to damage it.

As far as making such a thing anatomically-correct... well, we have amoebas and various other amorphous creatures, so why not the Sponge Monster?

I might go with an analogy to the Slow Blade and shields of Dune. Your animals' body structure is such that fast things like bullets zip right through & the tissues amorphously reconnect. Hammers & swords and such, however, separate the tissue long enough that surface effects preclude rebonding of the tissues.

Kevlar skin (you know, bullet-proof vests). A fiber so interconnected to it's other layers it distributes the force of the small projectile in a wider area, geometrically reducing the pounds/m^2 force and it's efficacy. Naturally, such creature wouldn't be natural, unless living in a enviroent where plants shoot you with spikes when you just try to survive. They could, however, be made so their skin is harvested. It would make bullet-proofing anything a lot cheaper if the critter were herbivorous. Also, at moon's gravity kevlar would be strong enough to anchor an orbital elevator. Naturally you would need an 'lunatic' amount ot it and ways to obtain it.

You could also just add bullet-proof vests to your enemies.

You could go with a creature whose outer 'shell' resembles a Kevlar vest, able to stop projectiles (up to a certain calibre) due to its tensile strength and elasticity but vulnerable to piercing and blunt trauma.

Maybe have it made from something akin to spider silk, with a layer of fat(?) as a shock absorber beneath it.

Make it so that it's a medium-sized creature (the size of a large dog perhaps), with a very thick shell/natural armor on its back (and perhaps even its legs and face). Very fast and vicious, very tough.

I present to you the armadillo: 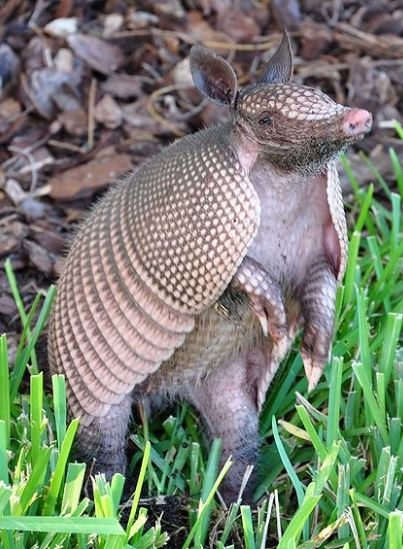 This funny-looking little guy has an armor which, depending on the angle at which it is shot at, can deflect even modern bullets.

Your version will be much fiercer and more bitey and, as said, the size of a large dog; and their armor will scale accordingly. Perhaps it can be even thicker comparatively.

You won't want to shoot at these guys from afar to avoid wasting bullets, and especially if your allies are around (ready to be hit via ricochet). And if you are close enough, you better take out your melee weapon because this A-hole is going to come for your legs and groin, or even your throat.

If you have a sword, on the other hand, you can try to cut him through junctures of the armor, or even try to strike under his belly where it's less armored.

If it decides to curl up into a ball of armor, on the other hand, a sledgehammer might prove more useful.

Make it an extremely far-sighted sniper.

If you're already incorporating genetically-engineered creatures in your own army, do the same for the enemy. Let them have some kind of natural sniper creature that has perfect eye sight over long distances, taking out your expensive tanks and troops with precision shots. Some of your own snipers try to take them out, of course, but they are routinely spottet before they can release the deadly shot.

This kind of creature could be engineered specificly to be a sniper, or it could have evolved as a land dwelling predator with only flying creatures as prey. This creature could eject pebbles or other naturally occuring projectiles at high velocity to shoot the prey. It's eyes only need to see clearly over long distances, but they must quickly spot their prey and shoot it before it can fly away in order to survive. This creates a high evolutionary pressure to reliably spot living things (as opposed to plants moving in a breeze) in any environment. Once the prey is incapacitated, the creature can find it by smell and touch, removing the need to see clearly at short distances.

This makes it a fearsome enemy in a warfare situation, where it can be equiped with special ammunition instead of pebbles and sticks. Specialized pioneer troups who sneak up on the creature and kill it with melee weapons might have a better chance of survival than highly trained snipers who have to move into its line of sight to take the creature out.

Have a creature with a certain level of non-Newtonian fluids as its dermal layer. Specifically, Sheer-Thickening fluids (like Oobleck).

Slower moving items don't trigger the hardening effect of the fluid while faster and more energetic projectiles do. By basing its natural armor off from a known effect you can suspend disbelief a bit and go for slightly more story tailored reasons for it.

21
What could dragons do in modern-day combat?

8
Would carbon fiber be a good choice to strengthen human bones, and how would that work?
1
Anatomically Correct City-leveling monster
6
The best role for a dragon in protecting a settlement?
3
How would gryphons go about defending themselves against humans?
7
Could one grow an organic sword?
21
Are dragons useless when there are guns?
2
Warhammer homonculi grow edged weapons out of their own bodies. What should those be made out of?