How to simulate tidal currents on an O'Neill Cylinder

How do you simulate tidal currents in an O'Neill Cylinder to maintain a healthy biome for aquatic life?

This question has a lot of possible answers so to narrow it down I am looking for a solution that addresses the following in order of importance:

I'm wondering how much energy it would cost to just ebb + flow the spin of the whole cylinder once per day.

Now, you actually get the drop for free. You can use regenerative braking, braking the rotational energy into a flywheel, that you can then re-provide during spin-up. You could design-in the friction drop to occur smoothly over the course of 12-hours, and then computer control the spin-up over the next 12-hours.

As El Duderino pointed out in the comments, having a global change in the "centrifugal" force won't produce a tide. Tides are caused by uneven dynamic forces (tidal effect is weakest directly under the moon, a spot that moves constantly as the world turns).

I wonder if this can still work, however, with the radial part of the acceleration causing clockwise and counter-clockwise "tides"; helped a little by the reduction (or increase) in the ground-pulling force.

You can still use regenerative braking to catch most of the braking energy for recycling into spinning back up. However, it's not quite like tides work on Earth.

Inside the cylinder you are free to arrange the hydrography as you like, so a couple options are:

Wave pools replicate the movement of the ocean one of two ways, depending on the size of the pool and the size of wave desired. In small wave pools, pressurized air is blown onto the surface of the water, or a paddle creates force in the water, creating small ripple-like waves. Other techniques utilize an "accordion mechanism" which opens and closes in order to suck water into its belly (opening) and push it out (closing) to cause waves. However, in high-volume wave pools, a large volume of water is quickly allowed into the far end of the pool, forcing the water to even out, generating a sizeable wave. In these large wave pools, the excess water is removed by being channeled through a return canal where it can be used again to generate another wave.

Make gentle waves that all flow in the direction of the circuit, and you will have an artificial current. The waves may be used for surfing too, which gives more options for leisure and fitness to the crew and passengers.

If you make the whole machinery run at really, really gentle levels you can even turn it into a lazy river, but that is not as much fun:

A lazy river is a water ride found in water parks, hotels, resorts, and recreation centers, which usually consists of a shallow (2½ ft. to 3½ ft.) pool that flows similarly to a river.[1] There is generally a slow current, usually just enough to allow guests to gently ride along lying on rafts. There may also be scenic elements added, such as small waterfalls on the edge of the river. Some connect or lead into swimming pools or wave pools, while others are self-contained courses that simply complete a circuit.

Add a different kind of spin.

An object can have only one axis of rotation as I learned here:

But for ease of thinking let us think about 2 axes, realizing in our hard physics heart that there can be only one. 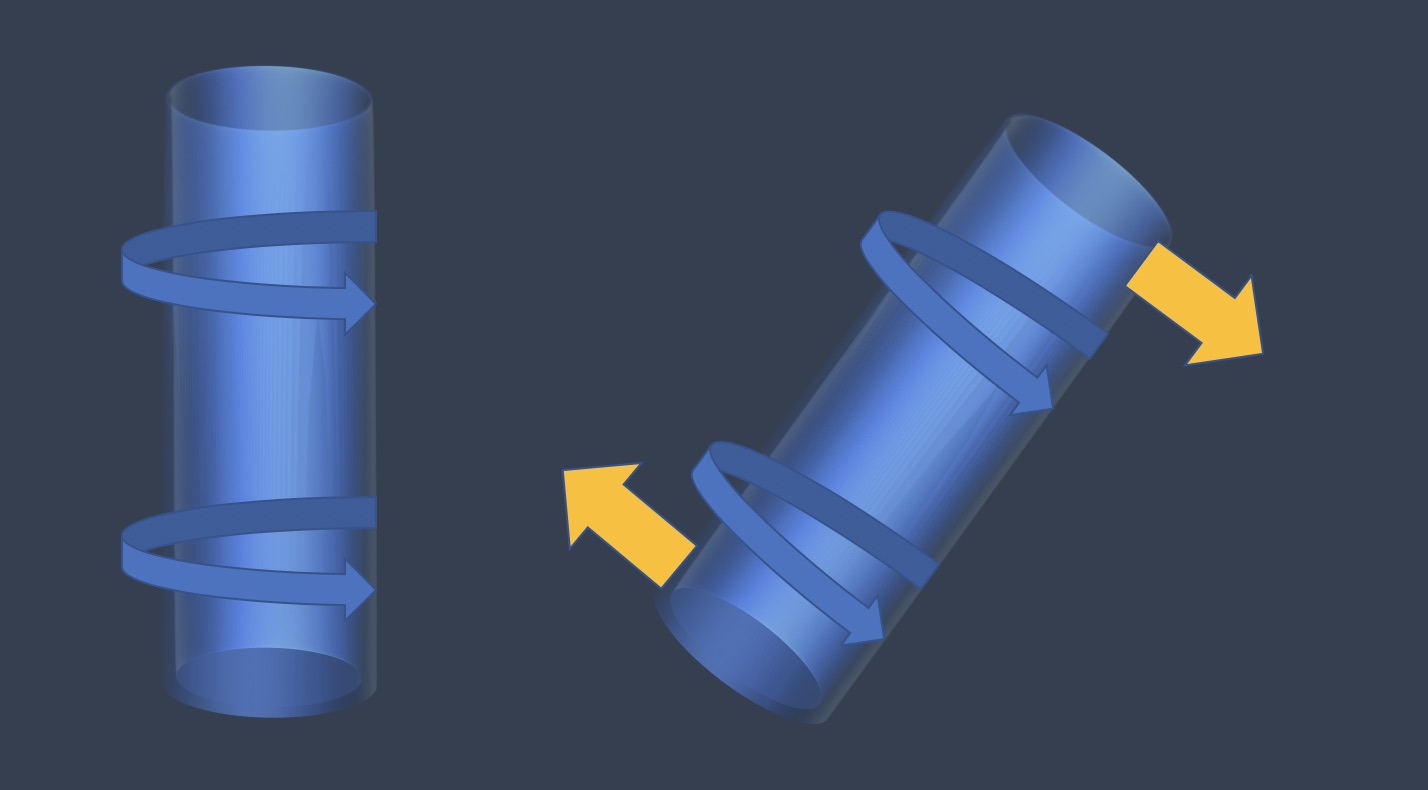 The cylinder spins along its long axis to simulate gravity. Yes, yes. Left image. Your left, not the images left.

Now let us also spin the cylinder along its short axis, like a propeller. Right image. This propeller spin is much slower than the long axis "gravity" spin. The effect of this gentle slow spin is to produce a vector force out towards the ends of the cylinder.

One could imagine this centrifugal force to simulate a change in altitude. Now it is "downhill" from the cylinder center to the ends. Water will tend to flow out towards the cylinder ends.

The cylinder ends admit more radiation than the central cylinder. Possibly a lot more. Water that reaches the end heats up and hot gases rise. The hot gases from the cylinders end will rise because of the same forces that pulled the water to the edges - gases are also pulled by this force, and hot, less massive gases will float atop cold. The evaporated water will make its way back to the relatively cool cylinder center and fall as rain.

At a guess? Try placing the cylinder in orbit around a suitably sized planetary body at the appropriate distance and have the cylinder rotate so that each ends moves first closer to then father away from the larger body.

Other than that pumps and weirs and power driven hydro mechanics. If you can build an O'Neil cylinder electric power shouldn't be a problem

Not the answer you're looking for? Browse other questions tagged ocean megastructures tidal-forces or ask your own question.

11
How do oceans in an O'Neill Cylinder replenish dissolved oxygen?