How Would A Tribal Chiefdom Govern a Colossal Land Area?

In the book series I'm currently working on, there's an archipelago around the size of Australia that is headed by a single tribal chief in the capital city of Jubenar. The archipelago is very sparsely populated, being home to only about 5 and a half million people. This is extremely apparent when looking at the towns and capital, which are basically oversized villages. The majority of the population is rural and scattered among hundreds of small farming and fishing villages in the interior and along the coasts. This chiefdom is sort of halfway between the stone and iron ages, with stone tools being the norm but iron arriving through international trade is quickly picking up steam.

In addition, the geography of this archipelago is extremely varied and rugged, as seen below on the Koppen climate map of the region: 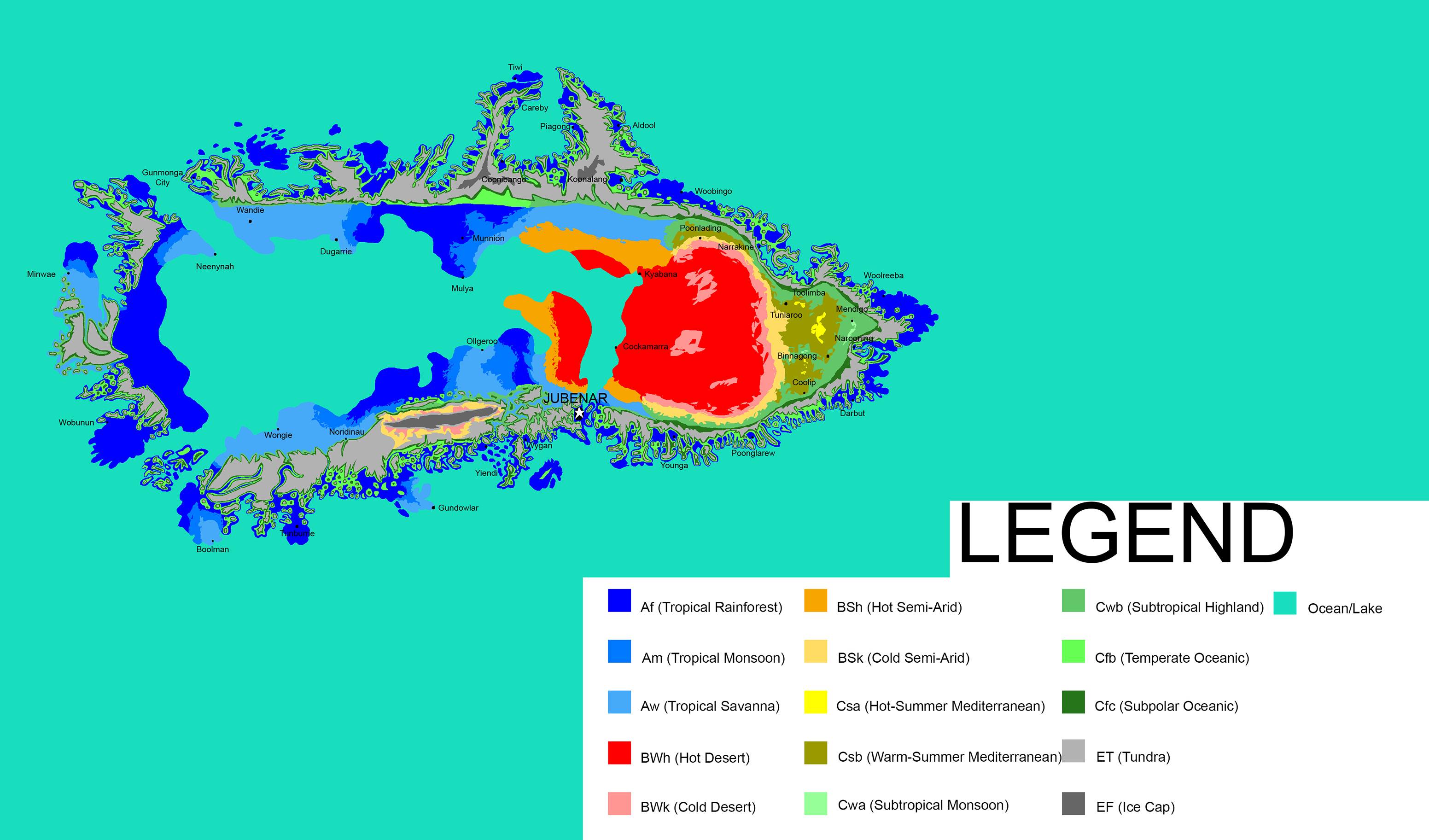 How could a tribal chiefdom based in what is essentially an overgrown fishing village govern what is basically a continent the size of Australia with extremely rugged terrain such as this?

Note: the culture and technology of this archipelago is largely based on those of various Australian Aboriginal cultures, with some Maori and Viking influences they picked up through trade with outside powers. Yes, I am aware this map resembles Greenland a bit too closely and I am working on fixing that, but the overall point still stands as the fundamentals of the climate and terrain types will not change much. Also it's probably worth noting that this archipelago's center pretty much sits directly on its planet's equator.

You have two distinct problems:

Easiest way to solve (1) is to have some resource absolutely needed by everyone and, at the same time, easily defended (cfr.: Niven's "Destiny's Road"; in that case it was a Potassium source).

If "power" is "benevolent" there wold be little push to revolt.

In this frame the most natural way to solve (2) is through the network of "trading posts" needed to deliver your "resource".

You can devise a net of advisors/traders/shamans conveying the will of the "chieftain" out and "taxes" (disguised as trade earnings) in.

In your archipelago I would have most of the commerce done with small sailboats (Polynesian style) keeping in the inside "lagoon".

Many variations on the schema are possible and choice depends on what, exactly, you want to let happen in your world.

What is really the difference between a tribe, a clan, a kin, a house? They are all terms used to describe an organizational structure of a people, that in each case are often (but not exclusively) heavily maintained by lineage. I could easily say Clan Targaryen and you know exactly what I'm referring to, with the preceding word holding only slight difference in meaning. Likewise, Chief has often been used simply as a way to downgrade the relevance of a leader who otherwise might be called a King. We say Native Americans had Chiefs, but Pocahontas was still considered a Princess. You have even already made the association within your question by referring to it as a "chiefdom" instead of a "kingdom".

Basically my argument is that you can simply adopt the structure of Medieval Europe, or even Feudal Japan and change terminology and a few cultural aspects. A tribe and a chief are what you define them to be in the context of your story.

A tribe is bound together via kinship. In your system you can use exchanges of noble boys and girls to cement bonds of kinship across this area. If we are local rulers but we share a grandson we have something in common. Perhaps the grand ruler will keep some children of local rulers in the capital for a time, treating them like his own children. They are hostages in a way but they become accultured in the ways of the capital and so serve as cultural ambassadors when they return home. This would be effective but not super exciting for a story.

Shaka Zulu was a mid19th century leader who united Zulu tribes. There is a lot written about him but there is no question his methods were effective and brutal, crushing and slaughtering his opponents rather than simply defeating them. It may be that some of ideas about warfare and conquest were borrowed from interactions with European invaders and so gave his approach a hybrid vigor. This could work for your fiction. War tactics developed in a different part of the world (and probably one with surplus population; the Maori would work for this) are adopted by your leader and used against the peoples of his continent. It is nothing they have seen before and they are shocked and awed into submission. This also be effective and more exciting for a story.

The bigger question is this: why would the people want to rebel? A government can hold onto power by not harassing the people and not doing anything so objectionable that their citizens revolt. I live in the United States and we're taught in grade school that England kept piling on the harassments in the colonies until people finally had enough and launched the Revolutionary War. Both Common Sense and the Declaration of Independence describe these offenses. So the first approach is simply avoiding anything that'll make people fight you.

Because that family has always been technically in charge, and doesn't ask for much:

Tribal rulers either ruled by force or because it was tradition. Any sufficient pressure will cause people to rebel, and tyrants are always ready to be deposed by angry serfs. With outside higher-tech cultures beginning to influence your system, I would advise you go with the traditional approach. Otherwise, incoming traders will favor oppressed minorities and their efforts to rebel as a way to secure favorable trade. A lot of colonialism was supported by factions of the locals (at least initially) because the current rulers were worse.

I would suggest that the ruling family is kind of the individually LEAST powerful tribe, and act in more of a court-like function, settling disputes and centralizing trade agreements with outsiders (or maybe this is the only family considered sufficiently pure to tolerate contact with outsiders; the options are up to you). The less the rulers impose on the people, the less the individual tribal leaders will be concerned about their tribes being exploited.

A religious Rule is also very traditional, and again, the less invasive, the less the risk of rebellion. Perhaps the capital is the holy sight for their religion, and the ruler a hereditary high priest.

Transportation can be vital in your system. With essentially a large, centralized sea, boats allow rapid movement of men & material, information & trade. The locals might insist foreigners aren't allowed to sail the sacred waters, securing the best trade routes for the locals. A prominent central island for the capital (not unlike some calderas...) would minimize travel time and make it worth it for travelers to stop there while trading (securing the best trade routes for the rulers) and if the ruler didn't need to demand taxes, who's going to complain about a guy who is only REALLY in charge when there's a foreign invasion or when your two sons are disputing which should be inheriting the local chiefdom?

Not the answer you're looking for? Browse other questions tagged climate geography extreme-terrain tribes governance or ask your own question.

30
How to Survive Mountain Environments With a Tribal Culture?
30
How can the terrain of a large area change abruptly in a short period of time?
8
Desert City - agriculture and other specifics
6
How long would it take these two languages present in a common area over a LONG period of time to merge?
10
Underground Terrain Types / Biomes / Agriculture
4
Is this an accurate simulation of a further south Australia with a filled lake Eyre?
2
Is it possible to build cities on Argentine and Brazilian swamps?
5
Is The Climate Map for My Alternate Earth Accurate?