Are Saturn's rings a safe place for adolescent space-hoppers?

Are Saturn's rings a safe place for adolescent space-hoppers?

As you know, space-hopper toys are based on the real-life creature. These are roughly balloon shaped and have two "horns".

The Biology (not part of the question but just for information)

They live amongst the rings of Saturn grazing on various bacteria that live there abundantly on the rocks.

The "horns" actually act as teats for the young to feed from but they are also handholds to keep them safe.

These creatures have much of the behaviour of sheep. They tend to move around in flocks and graze together at same spot.

Their mode of locomotion is to bounce accurately off the various bits of rock, ice, and debris. They have tough hides that save them from the worst injuries. Nevertheless most of them have some scars.

They weigh about the same as a medium dog (in the region of 20kg or 44lb).

Adolescent hoppers have to transition from clinging to their parent (they are all the same gender) to exploring the rings on their own. They have to learn to bounce around safely.

I am concerned about the adolescents and their relationship with the gravity of the rings. If, in their youthful exuberance, they bounce too far, could they escape the rings altogether? Would they enter a new orbit and maybe meet up with the rings again eventually? Might they disappear into space or fall to the planet's surface?

Is it possible to calculate escape velocity for the rings of Saturn? Does it depend hugely on the direction of travel?

In summary, what sort of gravity is there in a ring structure and how would one calculate escape velocity for these creatures? Might it be feasible for a 20kg space hopper to have the power to reach such a velocity that it escapes??

And it happens that the escape velocity is the same in all directions. Regardless of whether your trajectory is directly away from the planet or oblique, a velocity of $v_e$ will send you off into space.

The fastest land animal on Earth - the cheetah - can travel at a speed of $33.53 \space\text{m/s}$, which is much slower than the required velocity. And it doesn’t sound like your space-hoppers are anywhere near as fit as a cheetah.

However, there is another potential problem. Since Saturn’s rings are also moving at a constant velocity, the space-hoppers could possibly piggyback on the rings’ velocity to reach escape velocity.

...which is still much faster (more than $18$ times faster) than a cheetah can travel. So it’s pretty unlikely that your space-hoppers can escape, unless they have extremely powerful spring-like appendages.

As for crashing into the planet - that’s always a danger, if the space-hoppers wander too close to the inner edge of the rings. If they propel themselves beyond this inner edge, there will be nothing for them to grab onto (not even an atmosphere to fly in) to halt their acceleration towards the planet. The best bet would be to stay near the outer edge of the rings, since the change of accidentally escaping is practically nil.

EDIT: @Daron has considered the possibility of escaping the ring system but not the planet’s orbit, taking up an orbit outside of the planet’s rings. The calculations above haven’t accounted for that possibility, just the possibility of flying out into space forever. Presumably, if a baby space-hopper flew into a more distant orbit, all hope would not be lost and its parents might devise away of drawing it back. Let’s deal with this situation numerically.

We can calculate the radius of the farthest possible orbit that a space-hopper can fling itself into using a calculation involving the energy of the orbit. The total energy of an orbiting object with mass $m$ at a distance $r$ from a planet of mass $M$ is given by

Suppose that your space-hopper is about the mass of a cow, making it about $1.4\cdot 10^6$ grams. Then the approximate energy required to increase the orbit radius by $1$ meter starting from the Phoebe ring is about $0.087\space\text{N}$. That’s not very much energy.

The bite force of an alligator is around $13,000\space\text{N}$, so if your space-hopper can jump as hard as an alligator can chomp, then it could increase the radius of its orbit by around $1.5\cdot 10^{5}\space\text{m}$. Oof.

On second thought, better stay towards the middle of the rings.

The rings are a cloud of many objects that orbit Saturn very quickly. By very quickly I mean kilometers per second. This is why the ring's don't fall down: The centrifugal force pushing them outwards balances with the gravitational force pulling them inwards. If the Hoppers live inside the rings them they are also orbiting very quickly and they experience weightlessness.

If, in their youthful exuberance, they bounce too far, could they escape the rings altogether?

Yes. If you stand on the edge of a ring and jump as hard as you can, you will drift outwards for a while. Then you slow down and eventually take up an orbit above the ring.

If there is nothing to push off against then you are trapped up there and will starve. One solution if for your friends to throw small rocks at you to catch. You then throw the rocks away from the planet to propel yourself back down. Unfortunately the hoppers don't have hands. . . .

Of course this assumes the rings have hard edges. Certainly looks like it huh? 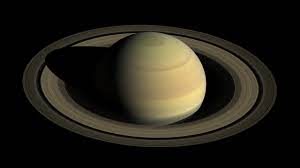 Keep in mind this photo is from very VERY far away. The planet itself has no hard edge so there is no reason to believe the rings do. It's far more likely they have blurred edges where the density of the rocks tapers off. So bouncing into empty space is not much of a problem. There is always something to bounce back off.

Would they enter a new orbit and maybe meet up with the rings again eventually?

If there is a hard gap between two rings you might be able to jump across the gap. But if you don't jump hard enough you will get trapped between like before. I don't think it matters if you jump towards or away from the planet.

Is it possible to calculate escape velocity for the rings of Saturn?

Yes! It's real real big and Franklin has already done so.

Does it depend hugely on the direction of travel?

I don't think it makes much of a difference. The direction of travel is important if you're trying to achieve orbit since you need to be going around very quickly to generate the centrifugal force. Keep in mind most spacecraft don't actually escape the gravity well.

Not the answer you're looking for? Browse other questions tagged science-based xenobiology gravity orbital-mechanics planetary-rings .

1
Could an advanced species, having evolved on a large planet with a deep gravity well, be helped out of it from above?
23
How big can a moon be where you can physically jump out of its orbit, to its planet?
4
Need help figuring acceleration out of a gravity well
13
Can the Sun lose enough mass that Saturn's current velocity becomes escape velocity?
25
How do you non-catastrophically reduce the mass of the Sun by half?
8
Calculating an eccentric enough orbit to allow a dip into atmosphere and escape again
4
Are elliptical rings feasible?
1
How Bright Would Super Saturn's Rings Be in Our Sky?
3
How to make an Old Solar System planet Venus scientifically possible?