Could Mandrills or Baboons be domesticated?

Could people domesticate baboons or mandrills, specifically for usage as pack of draft animals? I am aware that they are not quite that big, but could we selectively breed them to such size and capability across millennia as we have done with wolves or such? I believe that the potential is there, as other monkey species such as rhesus macaques have shown tolerance of humans and human surroundings (though they are typically regarded as pests in such areas). Could it be possible or are baboons and/or mandrills too aggressive to be domesticated?

EDIT: I feel I should clarify the circumstances in which they would be domesticated. The society that is in place at the time domestication would occur would be pastoral nomads, herding grazing animals across desert and dry steppe. As they settled river beds, I am unsure if they would keep the primates, as their previous purpose as pack animals/herd guards would be diminished. That is, if they are domesticated in the first place.

Aggression isn't the problem and it doesn't take millennia

The classic case is that of the Silver foxes, bred for friendliness over 60+ years. There is lots of information on the web including video footage. https://en.wikipedia.org/wiki/Dmitry_Belyayev_(zoologist)

The problem is the animals' anatomy. They don't walk upright and they aren't as fully adapted to quadrupedal walking as animals with hooves.

There would be a lot of strain on their backs and on their feet/hands - especially the wrists. Perhaps they could carry most of the load on their hind-legs. 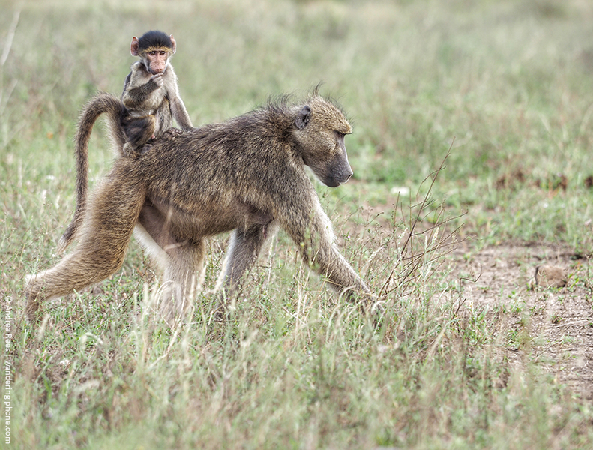 You would probably have to use males because the females are much smaller.

The mandrill is one of the most sexually dimorphic mammals due to extremely strong sexual selection which favors males in both size and coloration. Males typically weigh 19–37 kg (42–82 lb), with an average mass of 32.3 kg (71 lb). Females weigh roughly half as much as the male, at 10–15 kg (22–33 lb) and an average of 12.4 kg (27 lb).[9] Exceptionally large males can weigh up to 54 kg (119 lb), with unconfirmed reports of outsized mandrills weighing 60 kg (130 lb) per the Guinness Book of World Records.The mandrill is the heaviest living monkey https://en.wikipedia.org/wiki/Mandrill

Given millennia it's certain you could selectively breed for size, strength and endurance. You could do it in centuries.

The origin of the Shire Horse dates back to a cold blooded heavy horse, first mentioned in around 1066 brought into England after the Norman Conquest. From this developed the “English Great Horse” of the Middle Ages often spoken of by Medieval writers.

In Medieval times it was essential to increase the size and number of horses called “The Great Horse” in order to carry knights in full armour https://shirehorsesociety.com.au/history-of-the-shire-horse/#:~:text=The%20History%20of%20the%20Shire%20Horse.%20The%20Shire,wars%20pulling%20the%20heavy%20artillery%20in%20appalling%20conditions. 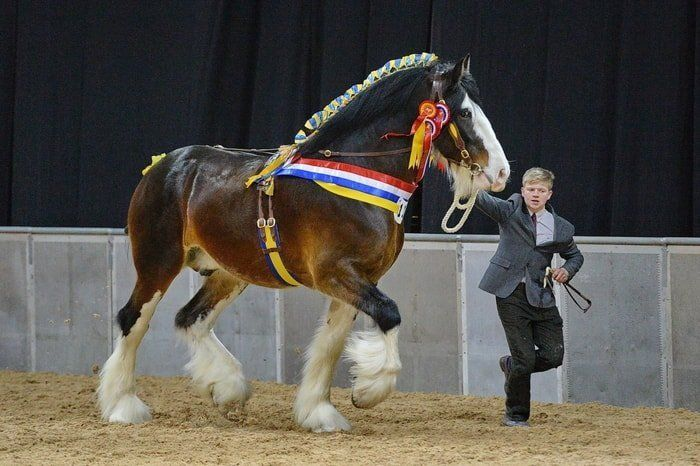 There really isn't much of a reason for someone to try and domesticate a baboon. People usually try to domesticate an animal when it is able to perform some job or service that humans can't or at the very least can survive on resources which are normally inaccessible to humans. Every domesticated animal we have does something for us that we cannot do on our own. Dogs can smell better than we can and are good hunting partners. Horses can haul much heavier loads and eat grass. Cattle and sheep turn inedible grass into milk, leather, meat, and wool. Even pigs eat our refuse and eat things that we can't.

By contrast, baboons and mandrills do nothing for us. They're primates, like us, so they eat similar things, have the same senses, are a bit smaller (poor pack animals), and can do similar things. Domesticating them is doing nothing but producing more mouths to feed for little benefits. There's really no reason to domesticate them, and even if you did out of sheer curiosity there's little incentive to keep them around in a pre-industrial civilization. It's like the same reasons why humans never really tried domesticating bears, we compete for just about everything. The one exception might be the gelada baboon, which does eat grass, but they're really inefficient at it and you're better off just getting a goat.

23
How does a society domesticate the hippo?

8
Could plants and chemosynthetic bacteria exist in a symbiotic relationship?
23
Could mankind have domesticated the zebra as a riding animal?
9
What American animals would have been domesticated had they not gone extinct?
30
How can sharks be domesticated to become man's best friend?
21
Where to employ domesticated goblins in a fantasy world?
4
Could this organism be viable?
11
Utility of a domesticated dwarf elephant
15
Could Orcs have domesticated hyenas?