So, when designing one of my sentient demihuman species for my fantasy world, I designed them to have greater sexual dimorphism.

Astriads, as a species, are artificially [divinely] modified humans, with (red hair, purple eyes, multiple pairs of short horns, but that doesn't really matter, but more importantly:) naturally large musculature. While women are less affected, and are only "fit by default", all males, without any training, have by default a physique of a body builder, as well as being taller on average (200 cm average height, whereas women are only ~170 cm average height).

While there is also some self-strengthening temporary buff magic, I'd like to ignore it for a moment(it's only temporary after all), to know how much would the medieval/ancient soldiers benefit from that kind of naturally body physique. I'd also like to know if there also be any drawbacks to have army of sword/spear & shield, taller, Predator's Arnold physique, especially if their legs are quite muscled up too, (including that these males would obviously require far more callories to stay fed).

What I'm trying to ask is what impact would such a change have?

Edit: This is reality check in more ways than one, because honestly, what I'm describing is very close to an idea of "supersoldier" in many works of fiction. I just think the idea isn't developped well enough and fully thought through to all of its conclusions, so I want to get more complete understanding of drawbacks and advantages of "supersoldiers".

It would be neutral at best, a liability at worst.

Ancient (and to a somewhat lesser extent, modern) warfare is mainly a matter of endurance, rather than strength. Classical battles were characterized by blocks of troops undertaking maneuvers, trying to force the opposition into an unfavorable position before driving home their advantage. Once battle was joined, it was in intense bursts of activity that would quickly tire out any soldier (the Romans had a special formation, the triarii, with troops in staggered lines so that they could swap out for allies when they tired). But often there was a clear advantage gained or denied during maneuvers that came down to the troops' ability to reposition quickly, accurately, and without wearing themselves out.

Under those circumstances, the bulk of your extra muscle would be a formidable disadvantage: it might be useful in a sprint, but overall, it's just more weight for you to carry around until the relatively brief part of the battle where you're actually fighting.

Your second concern is how much it would actually help. If your troops are strong enough to break through your enemy's shields with their blows, that's great, but it's no substitute for striking faster and more accurately than the foe. They will still need to practice and train just as rigorously as their opponents if they want to put their strength to good use. One thing it probably would not help with is the weight of their gear; as mentioned above, that's less about what they can deadlift and more about how much they can carry while marching for hours.

Last, but certainly not least, is the matter of diet. Not only do these muscles take a lot more food than your average ancient diet, they require specific foods, ones high in protein - which, in a world without powdered protein supplements, basically means meat. That's a very serious demand on your farms even in peacetime, let alone when moving supplies up to troops on campaign. (Remember, this is before any widespread method of preservation except for salt, which is expensive.) It also limits how much you can scavenge from enemy territory.

Where these troops would be extremely ferocious is on the defensive. Fighting from fixed positions means your own maneuvers are much less important, and you can stockpile heavier weapons ahead of time without wearing yourself out on the march. And being located in the heart of friendly territory, it would be much easier to locate suitable supplies and make sure they're stockpiled before meeting the enemy's attack.

For truly ancient warfare these would be formidable champions. 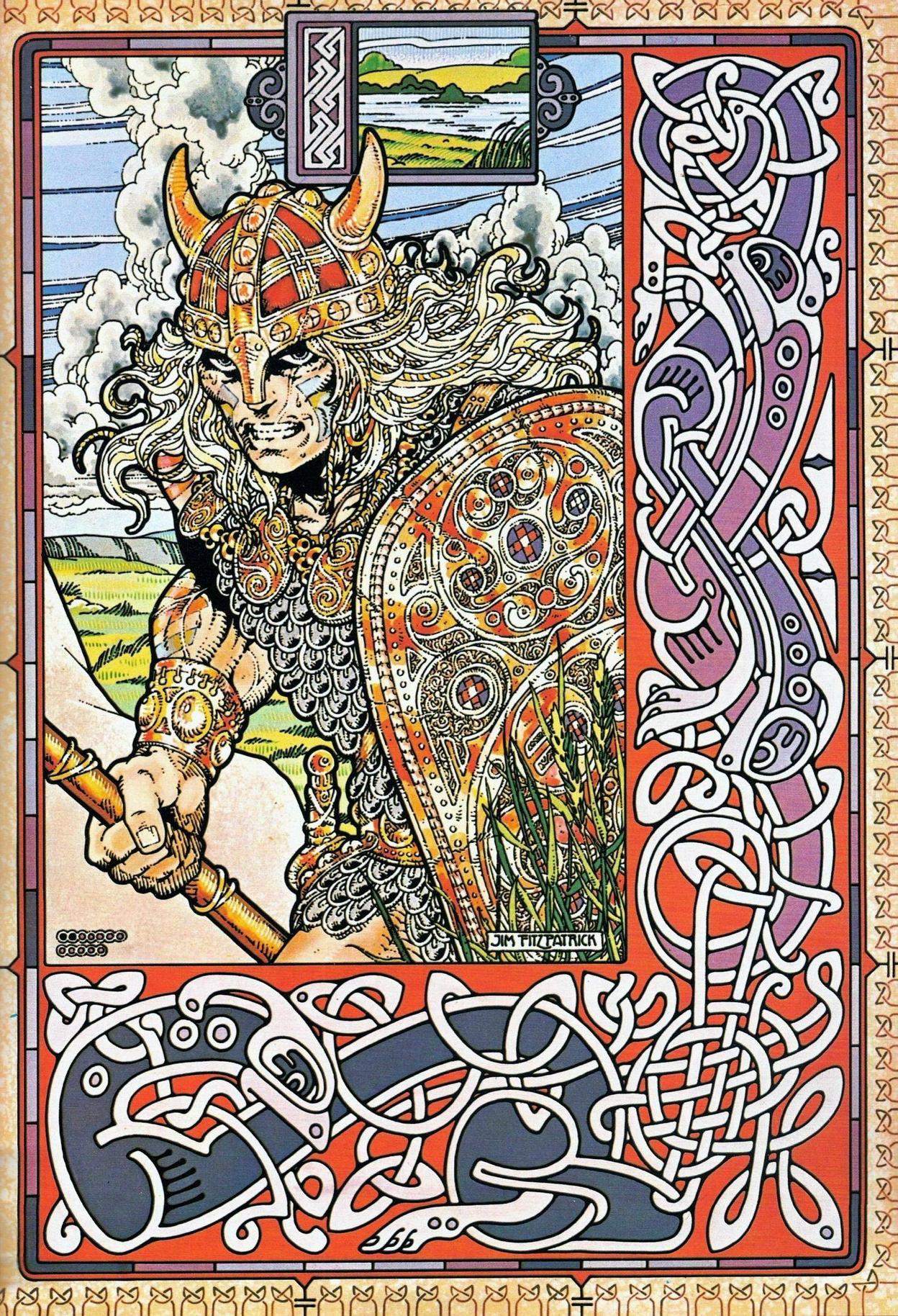 Depicted: Sreng, champion of the Fir Bolg as depicted by Jim Fitzpatrick. Book of Conquests is so great!

Bronze Age battles were, according to the tales, sometimes decided by single combat between champions. Hector vs Achilles is one that comes to mind, but Irish myths are full of these. It is sort of interesting since some of the Irish groups of this era were supposedly refugees from Greece and so might have been contemporaries of the characters from the Iliad.

It is a sensible way to sort out differences - send your two biggest baddest dudes. That way the many mediocre dudes are not too messed up from fighting and can still come home and take in the harvest. Your divinely augmented folks have the sound of champions and in a ancient world scenario where battles were decided by single combat, they would be a valuable asset.

Unless it so happens that your champion's small and unremarkable sling-toting opponent is also divinely augmented in a very much more direct way.

During the several centuries where England was at war with France, the English longbowman was an important staple of the army. The English longbow has great range and power but needs a lot of muscle training to use.

The longbow was so important and required so much training that in the 16th century every able-bodied man was legally required to practice archery.

Obviously time spend practicing archery is time that cannot be spent practicing anything else. So you get more better bowmen but fewer cavalry for example.

On the other hand your Beefcakes Astriads get this training for free. That means their army has immediate access to long-range archers. Then they can spent time training horsemanship for example.

Physique is pretty much irrelevant beside discipline, organisation, morale, training, leadership and logistics.

“The moral is to the physical as three to one.”

Not the answer you're looking for? Browse other questions tagged reality-check biology warfare .