How can blue blooded shapeshifter blush like a normal human?

An intelligent race of shapeshifter came to settle on present day Earth, they managed to clear the custom and are placed on 24hr monitoring by MiB agents. It is illegal for them to expose their kind to us so they took on a human appearance and learn mannerisms and etiquettes before mingling with the public, they learn to excrete water in the forms of tears and drool and even appears to perspires under hot weather. I'm wondering how about blushing when the shapeshifter tried to increase their own blood pressure only to turn blue or green which could catch unwanted attention? What's the most economic and elegant way to blush like a normal person for these blue blooded shapeshifters?

Lots of creatures can change the pigment of their skin. If it's a shapeshifter, I would expect it can change it's skin like a squid. They are famous for their incredibly detailed and very difficult to distinguish camouflage. https://youtu.be/PmDTtkZlMwM

I'd imagine your shapeshifter has some chameleon like qualities in order to help them...um...shift!

Since chameleons can't generate their own body heat, changing the color of their skin is a way to maintain a favorable body temperature. ... Beneath this are several more layers of skin that contain specialized cells called chromatophores. The chromatophores at each level are filled with sacs of different kinds of pigment.

If they can willingly alter their appeareance to a huge degree, then blushing a little should be second nature to them.

So if your shapeshifters are already changing form a creature with different colored skin or without something that resembles humas skin, they already have solved most of this problem.

Even if your shapeshifters have more modest abilities, there are a nomber of things they are probably already taking into account that would be a lot similar to blushing.

For instance, are they simulating skin marks, pimplies, freckles, other imperfectons?

Are they capable changing into people with different body types? Our skin donest look the same in every art of our body, look at out palms and the back of our hands, for instance. There's also the effect of the sun on the more exposed skin. Whenever a shapeshifter changes, they'd need the reight colored skin in the right locations, that mastery of their skin tone could be extended into blushing.

How they actually change the color of their skin, there are many posibilities. Manipulating pigments on theit skin would be an example, as EveryBitHelps mentioned. Then again, I would say it has to be something in tune to thier general shapeshifting abilities. If you already have that figured out, then adding blushing on top doesn't seem that complicated. If not, then I don't see why just focus o the blushing science.

Unless you are going for how to prevent an unconcious raise of blood pressure single them out. Then the shapeshifter would have to learn to identify the change and compensate. Or they could just shapeshif a thicker or more opaque skin. That never let's the underlying blood show through.

This would help other issues as well. If the undelying blood is contributing to the color of the skin, then the skin has a redder base tone by itsef. That means that when blood rushes out of an area (think when to press some part of your skin hard), it turns whiter in humans but it'd be the opposite effect for your guys.

The opposite of blue is red.

Unless you are looking at a pure frequency, for any color, the perceived color is the result of a mix of colors contributing to the end color.

Blushing means more blood in the skin and increase in contribution of red to the end color. The converse happens if someone is really cold with blood leaving the skin and going to the core. Without the red to balance, the (fair) skin of the cold person looks more blue.

For a blue blooded creature, removing a degree of blueness renders the skin relatively red. Consider this comely alien and her color inverse. 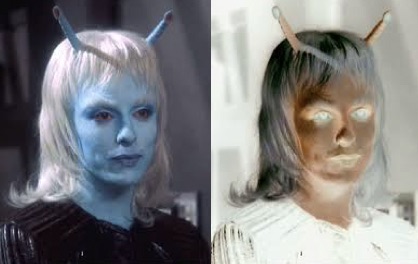 It leaves open the question of why shapeshifters might not take on any color they choose. Presumably it must take some time to finish a shape, which is then difficult to modify on the fly by the same mechanism.

If you have a lot of silver in your system and you can't get rid of it fast enough, you become blue. This is a condition called Argyria and usually happens to people who take medications containing silver.

Your aliens can do something like that, but using a red coloring agent instead of a blue one. People on Earth are known to have dyed their hair red with Kool Aid (which makes me wonder what that poison does to your inner organs). Perhaps by drinking enough Kool Aid your aliens can dye their internal fluids red from inside out, thus being able to pass as a human when blushing.

Several answers suggest there's a solution if the species is a chameleon. If they aren't chameleons, however, they might use technology. It might be that they tattoo themselves with a material that binds to the blood vessel walls and exhibits this chameleon like behavior when the blood vessels dilate, exposing a red-colored pigment when stretched.

Not the answer you're looking for? Browse other questions tagged humans xenobiology aliens shapeshifters or ask your own question.

17
What are some ways to explain how a shapeshifter retains his/her mental capacity?
16
Is a condition leading to a cold-blooded human possible?
13
How to evolve blue skin?
10
Psychological effects of a “normal” human in a fantasy setting
23
How to contain a shapeshifter
19
What sounds would be common for both forms for a human/wolf shapeshifter?
49
How to Interrogate a Memory-Stealing Shapeshifter?
5
How quickly could a “shapeshifter” lose mass, realistically?