Ask Question
Asked 9 months ago
Active 9 months ago
Viewed 140 times
2
$\begingroup$
Closed. This question is opinion-based. It is not currently accepting answers.

One of the most prominent features of the future is the technology to link the world with the human mind. The applications of what I like to call Direct Neural Link technologies are as varied as they are spectacular. Applications like altering, sharing and cataloging memories like Facebook photos, downloading information like “how to perform a life-saving surgery” or “preform the piano” directly into your brain, remote controlling a surrogate body on the opposite side of the globe, reforming the worst members of our society, allow amputees to become whole again through cybernetics and even stimulate nerves to literally make the lame walk and the blind see. The futurists and transhumanists paint a future with Direct Neural Link tech as a paradise to rival that of Roddenberry for the price of a cybernetic implant.

But surprisingly, very few authors or futurists take five minutes to ask the basic question, What happens when something goes wrong?

I remember a discussion with one such person about a device he called a dial-a-mood that can put you in a better mood with a push of a button. I asked him, “what is to stop some desperate hacker from hacking a rich person's dial-a-mood and making the rich snob fall desperately in love with them so the hacker can take their money?” All he said was, “would make an interesting story.”

Then recently I was reading Devolution: A Firsthand Account of the Rainier Sasquatch Massacre (check it out it’s good) Where It briefly talked about a guy who hacked his hands so he could play the piano and how an exosuit could help the paralyzed or infirmed only to be asked, and I quote, “Isn’t it possible for someone to hack that suit once you put it on, force you to pick up your perfectly legal assault rifle, and walk down the street to the local preschool?“

And those are just scratching the surface for how DNL tech can be abused. Why hack through bank security in a robbery when you could just hack the bank manager? Why smuggle weapons to hijack a plane when you could just hijack the pilot? What is to stop some jealous former lover from hacking your spouse's nervous system? How can a murderer be brought to justice when they controlled an innocent person to keep their hands clean? How could crimes even be investigated when you could just make someone destroy evidence and erase any memories of the incident? How could governments survive if democratically elected officials could be turned into some dictators puppet on a string? How could the world survive when any nihilist with a charged lab top can make any or all world leaders push the big red button with a couple of keystrokes?

Any of these possibilities are horrifying on their own, but the problem is DNL tech in ANY of its forms opens Pandora’s box on ALL of them. The Skynet Contingency has already made us question whether or not it is wise or even SAFE to research A.I. But we seem hesitant to ask the same hard pointed questions of DNL tech.

So here is the billion-dollar question: What laws rules and regulations would be put in place to try and mitigate all the dangers of Direct Neural Link technologies represent?

(Editing notes: I did want to know if this technology would be made illegal, but Henry Taylor rightly pointed out, "Any human process can be hacked through social engineering. So if we follow the logic of making DNL illegal to its logical conclusion, we would have to make every aspect of human civilization illegal and just move back into the caves." So I am curious how they would be regulated, rather than flat out outlawed)

I would put this in a comment but it is too long.

I think you need to be more specific about "Direct Neural Link" technology. It seems there are many levels of direct neural interaction. As it is, I don't think this question is framed properly, or perhaps not sufficiently elaborated.

Since the technology doesn't exist yet, we can only speculate the biological and technological divide between each of these (i.e. how far is the gap between sending touch impulses to the brain versus sending things to the brain to manipulate the body, thoughts, or memories?).

Then again, since we don't know, they might not since since people forget stuff they've experienced but that doesn't change the way they act. Are your personality and memories just manifestations of the same thing but at different layers in your brain? Or are they distinct? You might have to make up these rules in your world to properly answer your questions about legality.

And this might be completely distinct from short-term injection of thoughts which, presumably is not re-wiring the brain but firing specific impulses through pre-existing connections. But this seems a bit similar to sending sensations to the brain.

Complete control over sensations sent to the brain would culminate in simulated reality, but it might not lead naturally to memory or though manipulation as long as you don't count brainwashing over long periods of time (or maybe short periods of time if experiences can be sped up relative to real time).

Knowing that there is very useful lower hanging fruit but more dangerous higher hanging fruit but not knowing the gap between them may be a sufficient argument to conclude that it would not stop all research because you might argue against memory, body, or though manipulation, but how are you going to argue against prosthetic arms? You would need to be extremely paranoid or have prior knowledge or examples about just how small the gap is to ban it all outright.

When worldbuilding, it's helpful to start with the real world and see if any similar situations already exist. Your question basically boils down to this: there's a powerful technology that gives people control of other people's bodies over the internet. That obviously isn't a common thing now. But there are huge numbers of critical systems that are already being controlled over the internet, and you'd better believe that they are targets of hackers. One of the most high-profile attacks was the successful destruction of part of Iran's nuclear research program. The attack used a worm called Stuxnet to cause an explosion: 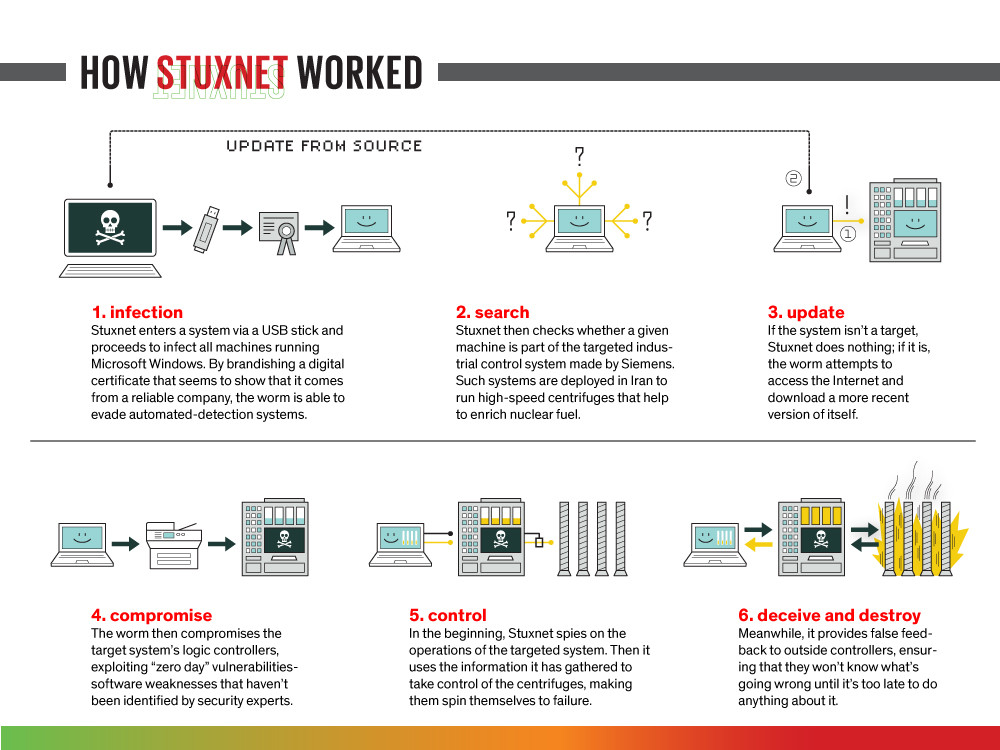 You're focused on the legal aspects of this technology. It's worth noting that the most important aspects of an effective cybersecurity program involve stopping attacks before they ever happen. This is true in the real world and in the DNL scenario you're building.

OK, now on to the legal stuff. There are several laws that already outlaw hacking and it's unclear if you'd even need another law to protect against DNL attacks. Here's a quick summary of existing US laws. The most important is the Computer Fraud and Abuse Act (CFAA), which carries sentences of years in prison for hacking into a computer system. CFAA wasn't written with your specific situation in mind, but it still applies. And there are legal precedents (e.g. Katko v. Briney) that say you can be held liable for shooting somebody even if you are nowhere near the firearm at the time of the shooting. So people who hack into other people's bodies and force them to engage in crimes will be guilty of the actual crime (e.g. murder) and they'll be in violation of CFAA (or similar laws).

Not the answer you're looking for? Browse other questions tagged law cybernetics mind-control or ask your own question.

5
How to Keep a Murderer from Hacking Your Cybernetic Implants
3
Should it be Illegal to alter Someones Memories?

24
How would a user interact with a direct neural interface?
2
What measures to regulate/detect/stop criminal use of lethal and stun weapons would be viable and accepted by the public in the near future?
44
Could the law be implemented as a computer program?
29
Prosecuting crime when the means used to commit it are far beyond current understanding
4
Imitating the double body aspect of quantum entanglement with other tech…
23
How does a super-power salesman not get shut down for legal reasons?
15
Where would I need my direct neural interface to be implanted?
3
How could someone recognize another person as being magically mind controlled?
5
How to Keep a Murderer from Hacking Your Cybernetic Implants