Would a 200-Pound Dwarf Still Need Facial and Body Hair?

How does a Neandertal compare with an anatomically modern human? This diagram below is a simplification of the real answer: 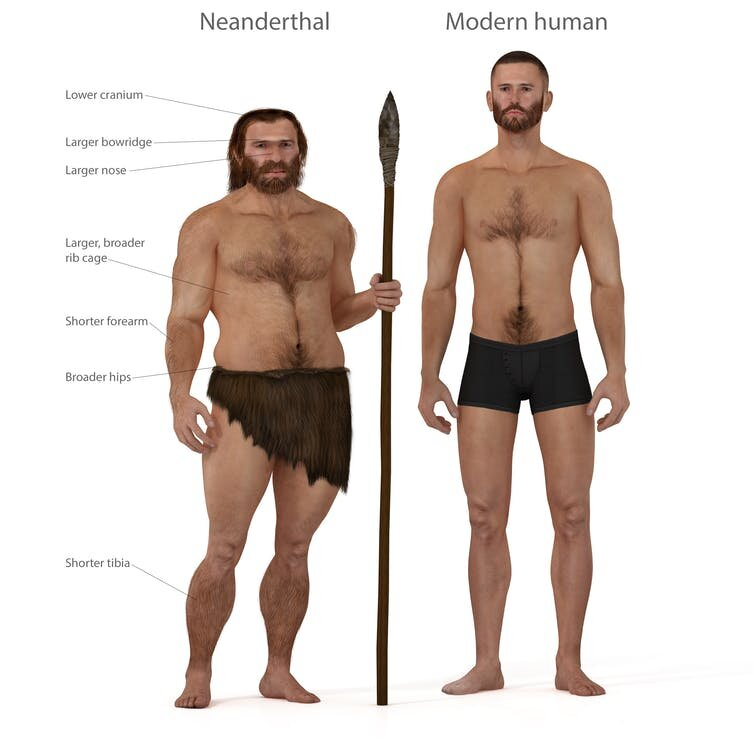 But if the Neandertals were smaller and heavier--enough to be analogous to the dwarf of modern fantasy--would they still need facial and body hairs?

In this alternate Earth, both Neandertal sexes had the same brain volume (averaging up to 1600 milliliters), but the average male stood 48 inches tall and weighed 200 pounds, whereas the average female stood 43 inches tall and weighed 168 pounds. In short, smaller in height but higher in weight than our Neandertals. With 200 pounds of bone, muscle and fat compressed into a smaller body, this one question stands--would the smaller, "dwarved-down" Neandertal still need facial and body hairs, or would the extra mass be enough to keep them warm in the frigid climate of Ice Age Europe?

Hair is not only for protection against cold, especially for such "naked" creatures like humans.

It all means that neanderthals needed hairs even more:

Apes do not have hairs for cold climates, apes have hairs to avoid freaking skin burns....my brother cut his hair bald and now his skin is falling in flakes mixed with blood because he got burned by the sun.

Modern humans are less hairy than other species of apes because we do not stand in the sun all day long. Most of the time, some people who enjoy skin cancer do get a sun tan on purpose at the beach.

Humans have just as many hair follicles as gorillas or other chimps, but our hairs are thinnier, too thin to be visible.

But to answer your question, no facial hair is not needed. China lived in the cold for millenia yet Chinese people with a full beard or even partial beard are incredibly rare.

The temperature receptors are located in the skin, if I recall correctly, therefore larger fat reserves would protect internal organs from extreme cold (they would theoretically survive a bit longer), but it would still inflict pain and frostbites. Therefore I believe the hair is still necessary, regardless of body mass.

4
Would a 200-Pound Dwarf Still Need to Wear Clothes?

4
The Dwarf--Let's Get Real, Shall We?
3
How heavy would a Naga be?
4
Would a 200-Pound Dwarf Still Need to Wear Clothes?
6
Feasibility of Second Puberty
6
Can A Hominid Species Possess Anime-Girl Proportions?
3
Average intelligence of tiny people
4
How would my Homo autisticus evolve?
1
How possible is my dwarf's biology?