Let's say that in a different world, humans evolved to have horns (e.g. Demons in many fantasy stories). Where would those horns be placed on the head, in regards to actual creatures with horns?

I've seen depictions with unicorn horns, horns on the side of the forehead, back of the head, etc. So which spot on the head would best correspond to, say, deer antlers?

It doesn't matter how or why humans would even have horns. Instead, if we had deer/antelope/buffalo or whatever horns, where exactly would they be on a human skull? I have a hard time imagining a deer head morphed to be human like. On some deer skulls, it seems horns would be growing on our eyebrows, on others like it would be behind the ears.

First of all, it’s worth noting that there is probably no practical reason for a human-like creature to evolve deer-like antlers. Humans are too fragile and don’t have enough mass to “charge” and use them as weapons, and bulky antlers would probably hinder humans’ ability to climb trees (by getting tangled in the branches) and hide in small crevices.

That being said, I can only think of one plausible mechanism by which humans might evolve antlers: Fisherian runaway. In this process, a trait that is advantageous for sexual selection becomes exaggerated and overdeveloped despite having no survival-related function. The peacock’s ostentatious plumage is a classic example of this.

So, at some point in the past, having smallish horns became “attractive” for humans because, say, they were indicative of good health. (“Look, not only am I fit and healthy, but I have access to enough extra resources to grow an entirely ornamental pair of horns!”) Then, because horns were considered attractive, humans evolved to grow more and more extravagant horns in a sort of sexual arms-race.

To answer your question: if horns are ornamental and evolved via Fisherian runaway, you can pretty much put them wherever you want on the human head. Since they’re not used for any practical purpose anyways, it doesn’t make much of a difference.

A rhinoceros's horn is distinctive, and the name "rhinoceros" actually comes from the Greek words for "nose" and "horn." But despite its size and strength, the horn is composed primarily of a protein called keratin--the same substance that makes up human hair and nails. https://sciencing.com/horn-rhino-made-7499547.html 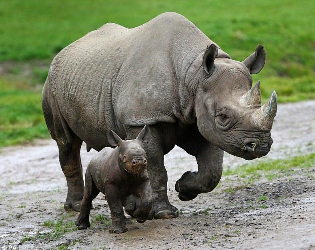 There are several places that a human could develop hair horns; the beard, moustache, eyebrows, and head.

They could be used for display and/or combat. 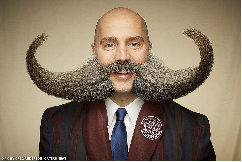 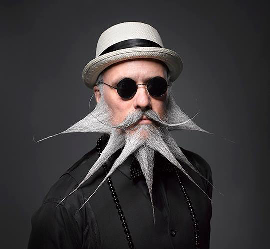 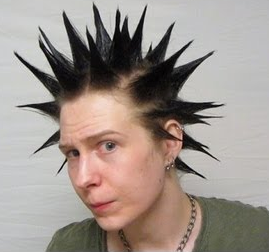 Curling from the back of the head to protect the nape of the neck.

Leopard are predators of primates and still attack people to this day. Horns that protect the back of the neck would protect against a leopard's favored attack.

... This fossil evidence, along with modern studies of primate–leopard interaction, has fueled speculation that leopard predation played a major role in primate evolution, particularly on cognitive development...

During predatory attacks, leopards typically bite their prey's throat or the nape of the neck, lacerating or severing jugular veins and carotid arteries, causing rapid exsanguination. The spine may be crushed and the skull perforated, exposing the brain. 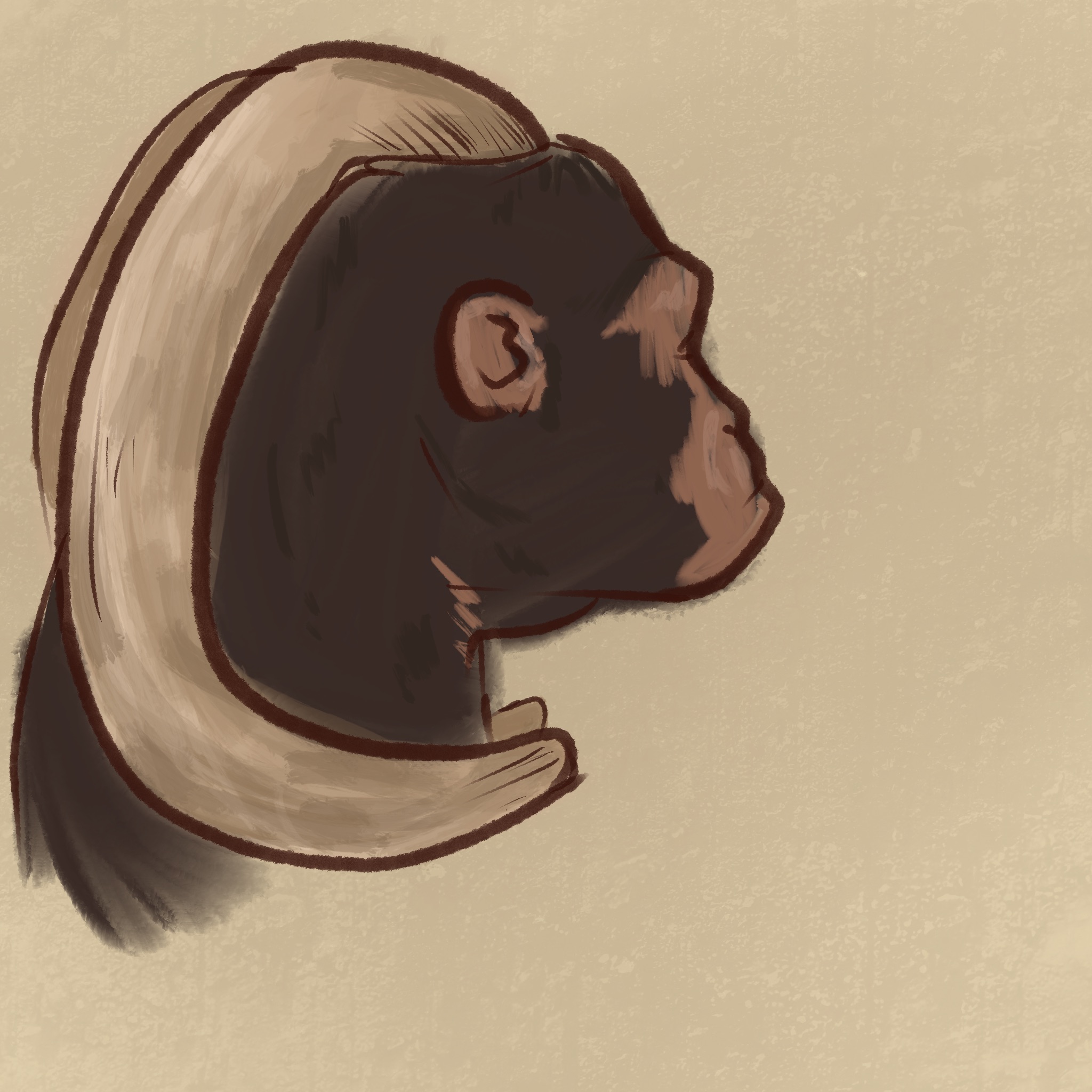 If we're talking about true horns — protrusions of bone covered by keratin — then the two most natural positions on the human skull would be out from the temporal bone or as an extension of the brow ridge.

The temporal bone, which lies behind the ear, is already the hardest bone in the human body, and it's well positioned to absorb shocks, redirecting energy to the neck muscles and away from possible concussive damage to the brain. Such horns would probably grow out, up, and forward, protecting the weaker bones in the sides of the face. This would also be an ideal place for deer-like horns: bone covered in skin rather than keratin, which are shed and regrown every year.

On the other hand, most ancient primates had much heavier brow ridges (running at the top of the eye orbital) than modern humans. Exaggerating that characteristic would turn eyebrows into a keratinous covering over a long protruding ridge or series of spikes. I assume these would be defensive rather than offensive — meaning that they are meant to deflect or stave off a blow, not to inflict damage in their own right — because they would not be positioned well for attack. Even when humans head-butt, they use the top of the frontal bone, not the eye orbital; too much risk to the delicate eyes.

On yet another hand, don't discount the possibility of tusks. Tusks are specialized teeth, which can grow from the upper or lower mandible. Because humans have an upright stance, I'd imagine their tusks would be like walrus tusks, growing down from the upper mandible, but with an outward curve. Though of course they could have lower-jaw tusks protruding up and out, like boars. This opens possibilities for self-scrimshaw, which would be cool, but orthodonture would be a nightmare.

I once read a zoology book which mentioned that some rabbits do have horn like growths on their heads.

And here is a link to an article about it:

And sometimes papillomaviruses have other effects on humans. From the above-linked article:

The discoveries of Shope and Rous led scientists to look at growths on other animals. Cows sometimes develop monstrous lumps of deformed skin as big as grapefruits. Warts grow on mammals, from dolphins to tigers to humans. And on rare occasions, warts can turn people into human jackalopes. In the 1980s, a teenage boy in Indonesia named Dede began to develop warts on his body, and soon they had completely overgrown his hands and feet. Eventually he could no longer work at a regular job and ended up as an exhibit in a freak show, earning the nickname "Tree Man." Reports of Dede began to appear in the news, and in 2007 doctors removed thirteen pounds of warts from Dede's body. They've had to continue to perform surgeries to remove new growths from his body since then. Dede's growths, along with all the others on humans and mammals, turned out to be caused by a single virus-the same one that puts horns on rabbits. It's known as the papillomavirus, named for the papilla (buds in Latin) that cells form when they become infected.

So it seems possible to me that a type of papillomavirus could evolve which produced horn like growths on the heads of humans, and if those humans were considered superior instead of inferior, humans with that virus could have greater reproductive success and over generations a larger and larger proportion of the population could be horned.

Some humans do have features called "cutaneous horns", whci can be caused by sunlight or by papillomavirses.

Here is a link to an article about them:

So the main problem would seem to be how to have the horns always grow on in the same numbers on the same parts of the heads of humans, instead of random numbers of horns growing in random places on the heads and other body parts of humans.

Since headbutting is not common combat strategy for humanoids, it would make more sense for them to evolve Wolverine-like claws or at least strong sharp bone knuckles to enhance punching, or tusks for devastating biting.

Not the answer you're looking for? Browse other questions tagged biology xenobiology fantasy-races or ask your own question.

7
How would I evolve horns on humans?