Suitable alloys of platinum or gold for weaponry

In the magic system I'm developing, denser metals (like platinum or gold) can store up energy in order to fuel spells at the user's need. A weapon made of said metals would be very useful, since the wielder would be able to store vast amounts of power into it (and even place enchantments into the blade), and it would also be incredibly expensive and rare (which those metals already are).

However, those metals are also unsuitable for use as weaponry, which leads to the question: are there any alloys of them which would be suitable for, say, making swords and axes? Alloys aren't as efficient as the pure material for storage, but would still be a lot more efficient than something made of steel, or even lead.

What you want is β-Ti3Au which technically is an intermetallic of gold and titanium. Apparently Tony Stark was right about a titanium gold alloy being a good choice for his suits.

The density is similar to titanium. Harder than steel, half the specific gravity.

A sword forged from this stuff would certainly be magical. Lighter, stronger, harder, sharper, corrosion resistant and extremely difficult to forge. It's difficult to form the alloy in the first place, and then you get the α-phase (same hardness as straight titanium). The harder β-phase forms only at extremely high temperatures.

Oh and it's a red-gold colour. You can give it various conflicting backstories of being forged with the blood of dragons and suchlike.

I was thinking about how mediaeval smiths might produce such a thing and you're going to love the answer: in the side of a volcano. And he'll still need coal dust and a fan. How exactly the smith is supposed to survive in such an environment is your problem. I expect that such weapons will have been made by your gods, giving a whole new meaning to "limited edition".

A regular forge won't be hot enough. It will return the material to the α-phase, which is not a horrible material for a sword but won't hold an edge the way the β-phase will. Any reforging of the Sword that was Broken would be an epic quest in itself; you would need to enlist the aid of your world's equivalent to Hephaestus/Vulcan.

Note that being very hard and keeping a superb edge is not the same as unbreakable. With stupid handling such a sword would be easier to break than iron because where iron will bend, this will snap.

It would be within the strength of a big fighter to apply enough torsion to snap it. But this only improves the item from a game perspective because players take care about how they use it, or face the ire of other players for destroying a unique item that's nearly impossible to reforge.

These physical qualities also affect the type of sword. To mitigate the risk of shattering, the blade needs significant depth in the cutting plane — like a scimitar. Long and thin is just begging for failure (but you might start out this way and have Vulcan fix the design flaw if they've been good little players).

Interesting comments. I don't think having half the density of steel represents a problem. Have you ever lifted a real sword? They're heavy! A lighter sword is a speed and stamina advantage.

Straight titanium is similar in hardness to 304 stainless steel, and although I could not find a hardness value for beta βTi3Au it is widely described as "four times harder than titanium" hence my razor blade comments.

Bronze swords were thicker to offset the lower material strength. With half the density you can double the thickness and come out the same weight. While aluminium bronzes can have up to 780MPa tensile strength, the alloys available to the Greeks were about 230MPa.

I was going to go with the inlay answer, but as another alternative, why aren't your magical weapons metal staves, rods, and Maces? Here, other than a strong handle, the weight of the weapon is what makes it effective. I don't know what properties your magic imbues, so I can't speak for what magical properties the weapon would have. Mass in a crushing weapon is valuable to cripple and maim armored OR unarmored opponents; By the time knights started wearing plate armor, sharp swords were undesirable and good only for fighting lesser opponents.

Similarly, heavy axes relied on small cutting blades and a lot of force and leverage. Plate everything but add mass with gold (not sure why lead isn't on top, as it's cheap, but hey, your rules).

If these weapons are merely batteries for magical storage, A simple Gold rod (perhaps with a steel shaft in the middle) would be an almost hallmark weapon of wizards. Just flashing a golden mace would say "Don't mess with me, I'm a wizard." On the other hand, stealing a wizard's rod would leave him vulnerable. I'd suggest a sort of breastplate with gold strapped directly to the wizard's body.

Use Gold Inlays instead of Alloys

Unless there's a strict requirement for the entire blade to be made of gold/platinum, don't use alloys. There will be plenty of compromises in quality, hardness, cost and utility that you may not want to make.

Getting a high quality and hard alloy from gold or platinum maybe possible but expensive. A claymore (2.5kg) made of pure gold (to establish an upper bound) would be USD\$144K. Compare that a ton of steel is USD\$980.

It's easy to find a blacksmith to work iron. It's easy to find a jeweler to work gold and platinum. It's very rare to find someon who can do both. Unless there's a very long history of this kind of workmanship, the number of practitioners in magical sword making is going to be very small.

Gold is very soft with a hardness of 2.5. Platinum is 3.5. Iron is 4.0 (source) Any alloy of gold or platinum is going to have to fight that lack of hardness. The metallurgy could get quite complicated to get satisfactory alloys.

Do a gold or platinum inlay instead of alloy. This allows your blacksmiths to forge a good sword and your jewelers to do beautiful work. The complexities of metallurgy to go away too.

Use the gold in other ways. Use gold for the pommel to counterbalance the blade. Use gold inlay on the blade. Put some gold in the grip. 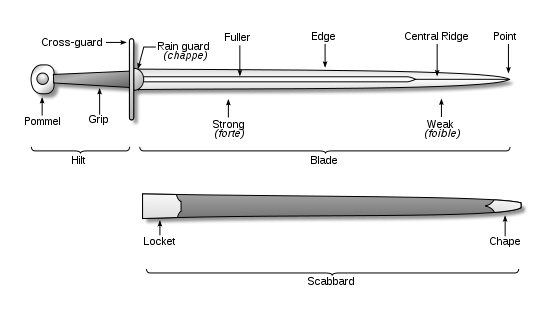 This way you don't weaken the steel of the blade and don't ruin the purity of the gold battery.

People love gold swords. Sometimes they have them in weddings even. But in real life gold is heavy and soft so it would not make a very functional tool. Even those wedding swords are not solid because they would be so heavy they would pull the groom's pants down.

I am reminded of the stealth aircraft which require a "fly-by-wire" interface because they are inherently unstable and unaerodynamic. Without the tech they cannot fly. So too your gold sword. As made it is pretty much unusable except for pulling down grooms' pants. But lay on that magic and it becomes light and sharp and also whatever else you want - maybe it can be thrown accurately and return to your hand, or sing songs around the campfire.

People who are digging magic swords might not need to see accurate metallurgy. Make your sword solid gold and maximally awesome. If the magic has the potential of wearing off, make your your grooms have maximally awesome undershorts.

Metals having density around 20:

Gold (density 19.3) is soft and not really good material for weaponry. But it can make a good decoration.

Tungsten - density 19.3 (like gold), but a lot harder. Crazy metallurgy, hardest to melt (not that others are a lot easier...)

In our everyday world, 90% Platinum + 10% Iridium alloy is used for creating measurement standards exactly because it is hard. I am almost sure that it is harder than steel.

Why can't a gold or platinum weapon be magically hardened? Not only would the cost of making such a weapon be great, but you could have varying levels of hardness based on how complex the magic is. This would introduce varying levels of cost and could also introduce the need to "refuel" the weapon, which would prevent infinite weapons and create true loss. True loss is what keeps an economy going!

Not the answer you're looking for? Browse other questions tagged science-based metals .

14
How would weapons and armour be affected if metal weight was negligible?
75
Is it possible to create a practical sword that's naturally toxic?
4
What would be the ideal way to weaponize plasma?
8
What metallic alloys would be used for weapons and armor in the XXI century knighthood games?
4
How best to control the cost of iron and what it’s used for in my world?
2
If these famous fantasy metals are real-life alloys, what would they be made of?
5
Storing bulk metals for centuries