Powered armor that enhances speed. How useful would it be?

I think people misunderstood my previous question, and that's my fault. However, I think it's a good time to test out something I've been working on.

You see, I've been watching Lobotomy Corp playthroughs and realized that there is a certain dramatic weight to being fragile. Not so fragile that a single hit from anything will do you in, but using kiting and The Hellevator to escape Gevura's heavy attack is definitely a cool move.

Powered armor is supposed to reflect that. Basically, it can protect against anything that can be sprayed and allows for inhuman sprint-bursts to help evade larger-caliber weapons (more precisely, their users).

But, I'm uncertain if it makes sense from a military perspective. Assuming people have access to modern tech (as in weapons) plus this "fast" powered armor, would its sprinting bursts be useful in most combat situations?

Power armour has a human inside it thus can't move any faster than the human limbs contained within. At best you'll gain some speed due to additional leg height but that would be marginal at best.

Trying to move faster than a body is capable of will break the human inside.

Power armour is also a lot of mass and mass is harder to get moving and harder to stop. Think lumbering giants, not agile sprinters.

Let's Say You Combine This... And This 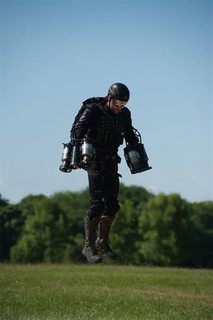 The first has more agility than is often thought, is immune to most small arms fire, weighs about 15 kilograms and costs about $3,000 per suit.

The latter has a surprising amount of controllability, top speed of 60 kilometers per hour, endurance time of 8 minutes of flight, weighs 44 kilograms, and costs around $440,000 per suit.

For some scale of costs, you can outfit 44 people with .50 BMGs for the same price

What you get is:

What can you do with 60 kph sprints?

The record for a modern rifle shot is 3.5 kilometers. At 60 kph, a jet-assisted power suit could close that distance fully in just as many minutes (3.5 min).

Or, combined with a rifle and a a portable fire-control system (I'm not sure if one exists), you could also stay at distance, fire on the move at the speed of an M1, but with the target profile of an infantryman.

For some idea of how useful that could be in a modern engagement, here's Galwan valley that China and India are currently disputing. Jet assisted powered armor could cross the entire engagement area in a few minutes. 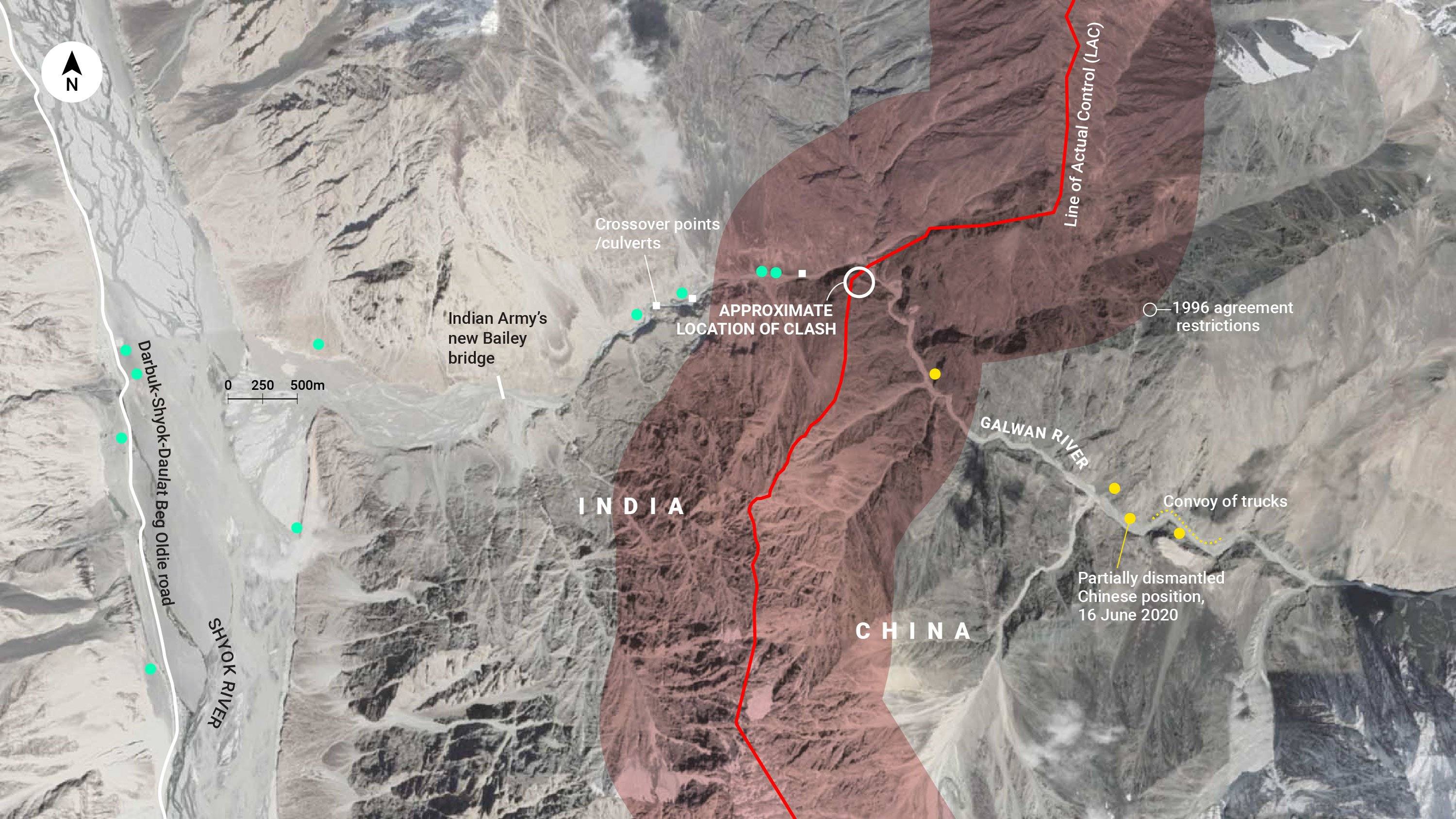 The human body is fragile

There are fundamental limits to the forces you can apply to the human body. You could build a machine that could react faster than the human body (depending on how you define "power armor"). The problem is what would happen to the body inside. Moving quickly enough to dodge bullets would involve subjecting the body to huge g forces. Colonel John Paul Stapp, MD, PhD, volunteered as the human test subject in a series of tests in the 1950s to find the limits of the human body. As NOVA puts it, "He lost dental fillings, cracked a few ribs, and twice broke a wrist, but he survived." That's not an experience I'd want as a user. And there's emerging evidence from football researchers that repeated hits at lower g forces can cause brain injury.

IT'S NOT VIABLE, AND WILL NEVER BE

And no power armor is. I've been over this before, and the consensus of the good people here, is that power armor is not viable outside of fiction. and the answers to this question i couldn't have said better myself.

I'm a paramilitary contractor, so in the field, such things would be a terrible investment. I don't care how cool it looks, but it only looks that good on paper. Taking my real world experience into account, The bottom line is that not only would power armor be useless in any kind of war, but it would bankrupt your defense or operating budget in a profound way.

tanks and drones are the far better investment.

and with science fiction, it's just stories. most who writes the screen plays were never there in the field, and thus they have absolutely no idea what they're talking about to begin with. No offense, but most of what you see on TV and on Film, is as opinion based as it is somebody's gilded cow-pie recipe, and will always be. That is until they begin showing reality or something that has a close enough semblance to reality to no longer be called a cow-pie. it looks good, but it's not reality. SO which is why i seldom watch most TV shows, although some suck less than others, and video games sadly are almost never spared from becoming a cringe-worthy cow-pie of a game that is largely opinion based and that I find hard to keep playing.

of course writers try their best, but almost all of us have to watch months or years of our work be turned into a dumpster fire by a media firm.

Would its sprinting bursts be useful in most combat situations?

Although a lot of military operations are using drones, combined arms, navies, high-performance aircraft and intelligence, there is still an element of 'boots on the ground' in particular in peace-keeping roles or occupied territory - or asymmetrical or special-forces warfare.

Such roles are also often unreachable for vehicles.

In these situations it is better to be light-weight, dispersed, and well-informed. The ability to speedily zip to and from areas has the following benefits:

If there are no costs, these are all benefits.

However, it always does come down to costs. Not every soldier can wear body-armour, nor is the best equipment often used. There are normally trade-offs for older but more reliable equipment, or weight vs endurance too. These compromises must be balanced for each mission.

From the word go you have to assume that these powered armor suits are cost/effective enough to be useful. Just like we dont question how most sci-fi uses WWI and WWII space combat because it gives us a framework to work with. But we also dont question "hard" science like The Expanse has us believe that combat is still done by humans at the controls, rather than it being fully automated. The Expanse is one of the hardest science series there is, but in the end you just have to believe the limitations it puts on computer technology and human intelligence by the time we reach that technology capability.

Would fast powered armor be useful? Absolutely and without a doubt. Powered armor is relatively small, and if you wanted armored you would have brought an armored vehicle. So powered armor has to rely on its strengths: the small size and maneuverability offered through urban area's, forests and steep mountainous terrain. The problem with humans is that they'll tire out and have limited speed. Powered armor would help them keep up their stamina. Normal doctrine when combat is started is to drop just about everything you are carrying except the things you are about to use. Because your stamina is as important, if not more, than your aim. With these suits you can keep going for longer while carrying more. If it also protects you from things like shrapnel all the better!

Now you want this armor to "dodge the user". That means that if they aim at you, you can evade their aim well enough so they'll miss. Staying out in the open is just stupid in my opinion, but racing from cover to cover, using their relatively small size and high speed and maneuverability that only infantry have to avoid getting shot? That sounds extremely plausible.

Not the answer you're looking for? Browse other questions tagged science-based warfare armors .

3
Would a molybdenum armor be worth wearing?
6
Would modern body armor be much more useful for creatures that only cared to protect their heart
18
How can my powered armor quickly replace its ceramic plates?
1
What modern materials would be useful for a steel plate armor?
11
How to prevent powered armor from letting people carry bigger guns?
9
Which situations would justify powered armor?
7
Would composite armor based on diamonds be useful against firearms?
4
How to justify arm mounted weapons on powered armor
4
Is it reasonable to have transparent faceplates on powered armor?