I’m currently working on fantasy setting with a strong focus on sea based adventures. To try and make the setting clearly different from Earth I thought I make large landmasses virtually unheard of, with numerous small island being common instead.

Are there any rational ways I could explain why this is so besides the lazy ‘a wizard did it’ excuse? Additionally is there any logical consequences I should be aware of in regards to weather and such on the islands?

On a final note, are there any features I could use to create natural or unnatural barriers to travel between different area of a vast global ocean?

There are several novels about ocean planets or planets with only small islands. I never felt it needed any kind of special explanation. If the Earth had only a bit more water, we'd have something like an island planet, because only the mountain ranges would look out.

As for the weather, there are two things that I can think of. There is a lot of rain on islands because of the surrounding mass of water. Look at pacific islands.

And there will probably be a lot of wind, always from the same direction (East). The Earth's rotation is causing the atmosphere to "slip", and on the surface that "lag" of the atmosphere is perceptible as wind. On the Earth that planet-rotation-wind mostly happens in high altitudes, because mountains and the high and low air pressure areas that are caused by the land masses break that wind closer to the surface. On a planet with a plain and uniform surface there won't be anything breaking the wind and it will be strong and continuous. On Earth, that wind is called "trade wind".

Vegetation will adapt to that wind. On Earth you can see this in windswept trees, or, if the wind is stronger, in trees only growing in the cover of ridges.

There will also be a lot of rain on the windward side, but only to a cetain altitude. Above that will be very dry. 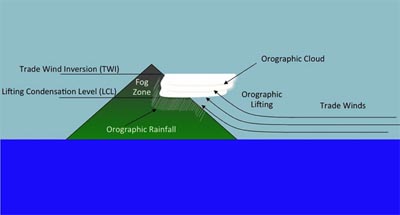 The source page for that image explains the phenomenon in detail.

In genereal I would think that researching the climate of pacific islands will give you a good idea of what to expect on an ocean planet.

Coming from one of the larger islands of the Pacific I can tell you that distance would probably be one of the biggest barriers to ocean travel. Typically the pacific Islands are volcanic due to the ring of fire surrounding most of the ocean. This gives the area a very large number of small islands that, while very fertile due to the volcanic soil, are lacking in resources normally needed for long ocean voyages. This would result in smaller boats (two to ten people each) as opposed to the larger ships that Western Civilisations used to cross the Atlantic / Explore the pacific. Even the Maori Waka Taua (War Canoes) which would have been some of the biggest boats in the area until Europeans arrived were mostly used for coastal travel and in rivers. Wikipedia Article on Maori Waka

Worth noting that the largest Waka could potential hold up to 80 people, but they were used for warfare (which traditionally was with other coastal tribes) and had to be prepared for years before the tree was cut down. Even these larger canoes weren't used on the open ocean.

If your world consisted of islands that were really just the peaks of undersea mountains formed by tectonic movements and not by volcanic eruptions; you'd probably be left with less fertile soil and less resources to dedicate towards unnecessary exploration.

What you'd probably end up with is many smaller groups of people doing very well for themselves on the islands they've settled on, but not putting too much effort into leaving for places unknown unless they had no choice. People would only venture onto the ocean if their islands could no longer support them. Inter-island trade would be fairly common, but only with islands in the area.

Add to that, the faster winds resulting from having no major landmasses to block them, and you'd find ocean voyages much more dangerous than Real Earth. Higher winds would be a much bigger challenge than normal in a small boat, and if there was a storm while you're on the open water you'll find the waves much bigger and the winds even fiercer.

I don't think you'd need to add any major obstacles (natural or otherwise) to discourage people from leaving the safety of their islands. Just lots of room.

A simple way to explain the prevalence of small islands would be to have the book set in, well, an area with small islands, and then use the explanation that areas outside the group of islands are unexplored. For example, if the story was set in the Pacific in the distant past, the natives of the area would have been exposed to the islands created by the Ring of Fire but very little exposure to the larger continents.

Which leads me into your question about weather: small islands are usually formed by volcanoes.

For barriers, you could use large reefs or other underwater structures providing hazard to ships, or possibly heavy fog (see also: Legend of Zelda).

A interesting insight into some of the logical effects of geography on culture and politics.

So if I go for the mostly volcanic origin for the islands, they are unlikely to lead to cultures that would expand much or build large ships because they lack the resources to build, but would likely be rich in term of agriculture?

So logically a volcanic island heavy world would likely lead to lots of small communities, with a tendency not to travel much… but that would make the few larger land masses extremely important from a tactical resource point of view.

I do want to have a few small scale empires in the setting, but it seems I will have to make sure they all have a valid reason behind there ability to become ocean going powers when no one else could. Course since my setting is a fantasy one, it does mean I can use magical reasons (like say a orb that lets you control the weather), but I think knowing the base hard geography underneath is important before you throw any magic into the mix!

I also like the idea of a island resources being pushed too far and causing some kind of political upheaval….

12
Rules for the Development and Spread of Urbanisation
8
How could the example map from geography books come to exist, and what would it be like to live there?
7
The Geography and Ecology of a Supervolcanic Planet
3
How can I explain the geography and climate of my planet?
21
What would it take for an island to sink and rise yearly and naturally
6
Advice on accuracy of world map
3
Where would rivers and lakes make sense on this continent?
4
I need help with the scale for an island