Elf genetics works differently than the standard Darwinian model. Rather than success being determined by the gene-holder surviving and reproducing, genes are "tagged" with success levels at the DNA level. Elves have many more genes than they express. For any gene that is expressed, if the elf lives a long time and is in good health, any expressed gene is "tagged" with a "+1". If the elf is unhealthy, its body automatically tags its' expressed genes with a "-1". A child's DNA is then chosen, with some randomness from the parents', but with a preference for genes that have a high rating. As a result, good genes get passed on, despite most elves living to adulthood and having comparable numbers of children, and elves tend to be healthy and long-lived.

Could this happen biologically? (I know little about biology.)

Yes. In fact, it kinda does happen biologically.

The trick is methylation.

Methylation can only give you a +/-1 signal--no finer degrees are available--but that's all you explicitly requested, so that should be fine.

If your elves are simply diploid, like humans and all other mammals, you could have a system of chromosome inactivation, like X-inactivation in mammalian females but extending to all paired chromosomes, such that only one set of chromosomes actually influences an individual's features, and is modified by methylation or demethylation during their life, and then use the methylation status of the active vs. inactive alleles to influence the probability of selecting one or the other during meiosis. The system would likely be more effective, however, if (like many plants) your elves were actually polyploid, with four, six, or 8 sets of chromosomes, such that some chromosomes can be inactivated and held in reserve for testing in the next generation while still preserving multiple sets of chromosomes for expression (and thus testing and marking) in the current individual.

The way organisms do this is mate choice. 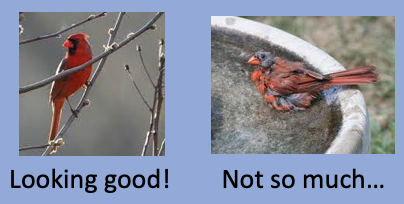 If I am weird acting or weak or diseased, or small and stunted, my genes are in effect labeled with -1 for potential mates. Potential female mates that is, because they have a greater stake in any reproductive project - my female mate will contribute considerable physical resources, time and effort to making a young one and I will contribute some sperm if I can manage. Mate choice be females is a way to weed out bad genes and males are the dispensible experimental arm of many species.

No-one shows this off better than birds. If you can manage the rocking look of the healthy male cardinal, you display to potential mates that you are free of parasites and successful at dealing with predators, to which you are extremely obvious. Females of many species like that alive and not diseased look!

As far as advertising your mate choice because of your actual genes as you propose, that is a GATTACA sort of scenario, where a persons genotype becomes their proxy phenotype and determines personal worth both as a mate and in general to society. You could have something like that for elves. If I turned out to have sucky genes I might be tempted to lie, as was the case for the protagonist in GATTACA.

Not the answer you're looking for? Browse other questions tagged biology xenobiology genetics or ask your own question.

28
How can I make a net beneficial genetic trait occur only in a small fraction of the population, sustained?
7
Stealing genetic code
3
Highest possible percentage of genetic diversity within a species?
5
Fine-tuning human genetic-level transformation
11
Greatest possible genetic difference between a male and female of the same species?
6
Implementing genetic-level transformation - mechanics
5
How quickly would a genetic trait originally found in only 1 village spread across Earth?
17
Genetic structure of a trait with six discrete phenotypes
26
Is intraspecies genetic incompatibility possible?