How to cross a metallic sea?

Suppose human explorers came across a terrestrial planet hospitable for life, but with more than 70% of its surface covered by gallium.

When temperatures rises in the day it will form an ocean of liquid metal so how do they cross it?

I am looking at interstellar tech level and also submarine will likely be destroyed when temperature drops in the night.

When temperatures rises in the day it will form an ocean of liquid metal so how do they cross it?

They need to pay attention

so liquid gallium will sink under a crust of solid gallium. This means that until the whole gallium is liquid, it will be more or less like being in the polar waters, surrounded by metallic icebergs (gallsbergs?).

Once the whole body is liquid, the high density will make it easier for something to float on it, but will also give more drag.

Probably the most apt solution is to have some small submerged winglets which give portance and lift the ship above the surface of the liquid, to drastically reduce drag. Even better would be an hovercraft.

Due to the high density operating a submergible will be quite challenging. To have it sink under the surface its average density will have to be higher than the one of gallium: expect a very cramped space.

Add to this that

Gallium attacks most other metals by diffusing into the metal lattice. For example, it diffuses into the grain boundaries of aluminium-zinc alloys and steel, making them very brittle.

and you see that it will be challenging: you probably need to have at least some polymer coated vessel to prevent gallium attack, or use a metal which is not affected by gallium diffusion.

Temperatures may change enough between day and night to melt the surface of a gallium "sea" but unlike water, liquid gallium is opaque, so the stellar radiation can't penetrate and even slightly warm the liquid below the surface.

Therefore, if the sea is to become liquid at all, there needs to be enough heat flux from below (from inside the planet, that is) to keep most of the sea melted, so freezing only takes place at the surface (mainly due to radiative cooling at night). The result, given that solid gallium floats in the liquid much like ice in water, is that you'll get a skim of "ice" that slowly thickens the longer the surface stays cold.

During local winter, this "skim" might get thick enough to support substantial loads, as does ice on lakes or seas in subArctic and Arctic climates on Earth. In local summer, the gallium might remain liquid day and night, or barely skim over.

As noted above, most metals are bad choices for gallium sailing -- however, composites are not affected this way. Wood, composite or inflatable hulls might be a very viable choice, with sail power (engines always seem to want to put metal parts in the "water"). The hull(s) could be very small relative to the load, compared to what water-borne sailors are used to, leading to the likelihood of tricycle layouts with small floats supporting a load-bearing framework -- more like ice boats than Earth ships.

The brilliant part of this is that it would be almost impossible for a "man overboard" to drown -- hypothermia could be an issue, over time; despite being as temperate as a tropical Earth sea just to remain liquid, the gallium will conduct body heat away far faster than even sea water, but a person would float far higher than is the case even in hypersaline water like the Dead Sea (though not anything like as high as in old pictures of huge mercury pools). Standard overboard survival drill would be to lie still, on your back, with arms and legs spread for stability, and wait for rescue. Swimming would be more like crawling in very soupy mud than what we're used to.

Any flat boat type will do. Propelling it might prove tricky, but people solved that satisfactorily thousands of years ago by using sails. You might also use propellers like a hovercraft does, but I wouldn't bother with actually hovering the craft. That would just be a waste of energy.

If you worry about drag, that's not a problem once your craft gets fast enough. It'll just rise out of the gallium and glide across its surface. Just like speed boats do on water. But at much lower speeds. I'd wager that even rowing boats would be built to rise out of the gallium. You will also get much less waves than you would get with water, so gliding is even more fun.

What you absolutely must worry about is the fact that that gallium attacks other metals. You must build your ship in such a way that no gallium can ever get into contact with vulnerable metal. Even in the case of accidents. It would just be too sad if your boat scratches a stone, and subsequently falls apart while it's on the high seas! As such, a coating is not enough. I would strongly advocate for building the entire supporting structure of the boat out of inert materials. If you need to resort to wood, so be it. But a 100% plastic boat would be more likely, imho.

As posted on an answer above, liquid gallium would sink under solid gallium, forming a crust. Potentially, a tank type vehicle with rubber/polymer treads would spread its mass so much that when it traverses over solid gallium, even a thin layer, it does not crack it. Even if the gallium is liquid, it could maybe still be traversed using tracks (exploiting the high surface tension) and a retractable "skid" (to lower ground pressure even more). 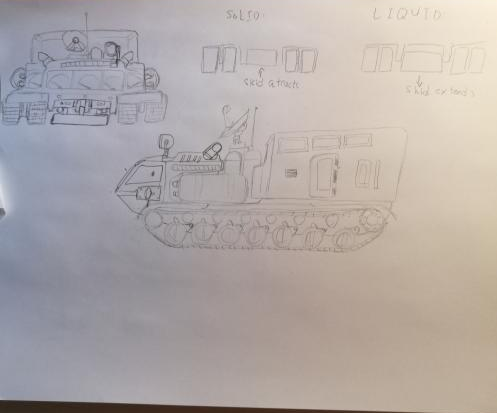 The vehicle is so large because it is self contained: it contains all the life support and equipment that the scientists may need to operate for a long time independently. Due to the sheer size of the seas (and their extreme viscosity), something that skims over them at a fast speed can only sustain short journeys, as it requires quite massive amounts of energy to propel such a vehicle at this speed over liquid gallium (and this kind of vehicle may also need to stop at night). If scientists need to get to somewhere far away, they might as well make a slow "crawler" base and slowly travel to where they need to go, as this would expend much less energy.

Magnetic levitation is possible over any well electrically conductive material. It's just a technical problem to precisely manage the AC magnetic fields required, but the technology exists already. It's no issue for interstellar civilization, even if complicated by sea waves.

Not the answer you're looking for? Browse other questions tagged technology transportation ocean sea-exploration or ask your own question.

47
With what liquid should I fill my dead, intraversable seas?

8
Exploring deep ocean at 1GPa with minimum metal available
6
Sea Travel Variables
5
How to sink a small island under the sea with 1960s tech?
6
What would happen to the climate if Earth's sea-levels rose 2000m?
7
How Would A Group of Undersea Explorers Survive if Their Food Supply Ran Out?
3
How fast could a medieval transportation cross a sea of honey?
8
How would underwater weaponry and technology look under high pressure?
10
Can any manmade vessels float on ocean of liquid nitrogen?
3
How to cross a gorge with deep valley plagued by corrosive effluvium in medieval times?