Assuming magically animated skeletons capable of projecting the same muscle force as an average human (note: not someone who has trained a bunch or such, average) that are tireless and unceasing, what are the respective benefits and drawbacks of oars versus paddlewheel arrangements for the propulsion of oceangoing warships.

Weaponry for the ships can be assumed to be those of Middle Ages: rams, arrows, catapults, maybe greek fire or ballista.

Besides allowing for much greater maneuverability in combat situations and navigating complex water ways, oars are surprisingly efficient! This study by Cornell puts the efficiency of oars at 84-85%

The real reason for a paddle wheel is to convert rotational energy into motion so you can use your steam engine to turn a paddle wheel and push the boat upstream. With rowers, there is no need for this so having the fine control of paddles makes a lot more sense.

Unlike a paddle wheel, an oar doesn't have a large amount of rotational inertia so the rower can change direction in an instant. Paddles can be raised or lowered in the water to change the amount of force applied to the water per stroke. Finally having a bunch of undead skeletons pushing on what amounts to a paddle boat would look quite silly compared to an army of the undead rowing a Trireme at ramming speed.

As an alternative to either oars or paddle wheels, you could attach a diver's weight belt and a tow cable to each of your undead and then drop them overboard. Once they sink to the bottom, they could pull your galley along behind them as they walk in whatever direction you command. Since your skeletons no longer need to breath, their efforts need not be confined to the traction-less surface of the water.

...And think about how cool it would look... your galley just floats upstream with no visible means of locomotion.

...Also, during close combat, some of the skeletons can detach their weight belts and swim up to the surface to join the fight while the rest stay still, holding your galley perfectly still so that your archers have a more stable platform to aim from.

what are the respective benefits and drawbacks of oars versus paddlewheel arrangements for the propulsion of oceangoing warships.

If these creatures have anything like the mentality of zombies, the co-ordination needed to row as a team is going to be way beyond them. Also steering on a rowed boat depends largely on the rowers and less so on the tiller. These skeletons may be capable of learning to make crude rowing movements individually but the fine details are going to are going to be a nightmare.

I suggest that they do have zombie mentality and they run relentlessly toward anything living that is nearby.

The ship design would have two large hamster-wheels that are side-by-side but divided by a screen. These are each connected to a paddle wheel. A crew member could stand enticingly in front (or behind) each wheel to make them run in the desired direction. When turning, one of the crew members can hide and the other can move nearer to their hamster-wheel, causing the runners to speed up. To stop, both 'target' crew members disappear from view. To turn on the spot, one crew member stands in front of their tread-wheel and the other stands behind theirs.

Sorry, it would have taken too long to edit in a full team of skeletons, but here's the idea. 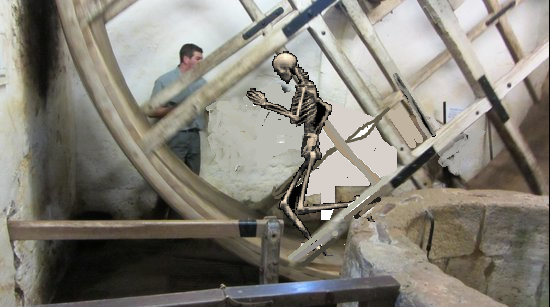 I am not an expert on the relative merits of oars and man powered paddlewheels.

But it is a historic fact that man powered paddlewheel boats and ships were used in China for centuries, so it may be presumed that they had some advantages over oars for some purposes.

The first mention of a paddle-wheel ship from China is in the History of the Southern Dynasties, compiled in the 7th century but describing the naval ships of the Liu Song Dynasty (420–479) used by admiral Wang Zhen'e in his campaign against the Qiang in 418 AD. The ancient Chinese mathematician and astronomer Zu Chongzhi (429–500) had a paddle-wheel ship built on the Xinting River (south of Nanjing) known as the "thousand league boat".[16] When campaigning against Hou Jing in 552, the Liang Dynasty (502–557) admiral Xu Shipu employed paddle-wheel boats called "water-wheel boats". At the siege of Liyang in 573, the admiral Huang Faqiu employed foot-treadle powered paddle-wheel boats. A successful paddle-wheel warship design was made in China by Prince Li Gao in 784 AD, during an imperial examination of the provinces by the Tang Dynasty (618–907) emperor.[17] The Chinese Song Dynasty (960–1279) issued the construction of many paddle-wheel ships for its standing navy, and according to the British biochemist, historian, and sinologist Joseph Needham:

"...between 1132 and 1183 (AD) a great number of treadmill-operated paddle-wheel craft, large and small, were built, including sternwheelers and ships with as many as 11 paddle-wheels a side,".[18]

The standard Chinese term "wheel ship" was used by the Song period, whereas a litany of colorful terms were used to describe it beforehand. In the 12th century, the Song government used paddle-wheel ships en masse to defeat opposing armies of pirates armed with their own paddle-wheel ships. At the Battle of Caishi in 1161, paddle-wheelers were also used with great success against the Jin Dynasty (1115–1234) navy.[19] The Chinese used the paddle-wheel ship even during the First Opium War (1839–1842) and for transport around the Pearl River during the early 20th century.

So a study of the history of man powered paddlewheel vessels in China to see what their uses were and how they compared to oar powered vessels would be useful.

Of course your undead zombie crew would not get tired or need food and water like living crew members. And that should change the relative benefits of using oars or paddlewheels in ways I can't think of at the moment.

Not the answer you're looking for? Browse other questions tagged warfare transportation ships transport or ask your own question.